This exhibition will be held at OCAD University during the month of February to create space for the celebration of the multifarious meanings of being Black in Canada at OCAD University in 2017.  The submission criteria is inclusive to all art forms. We’re looking to showcase a diverse body of work from Black students at OCADU and in Toronto.

All submissions to be sent to: bit.ly/BLXCK

Accepted applicants will be notified: January 13, 2017 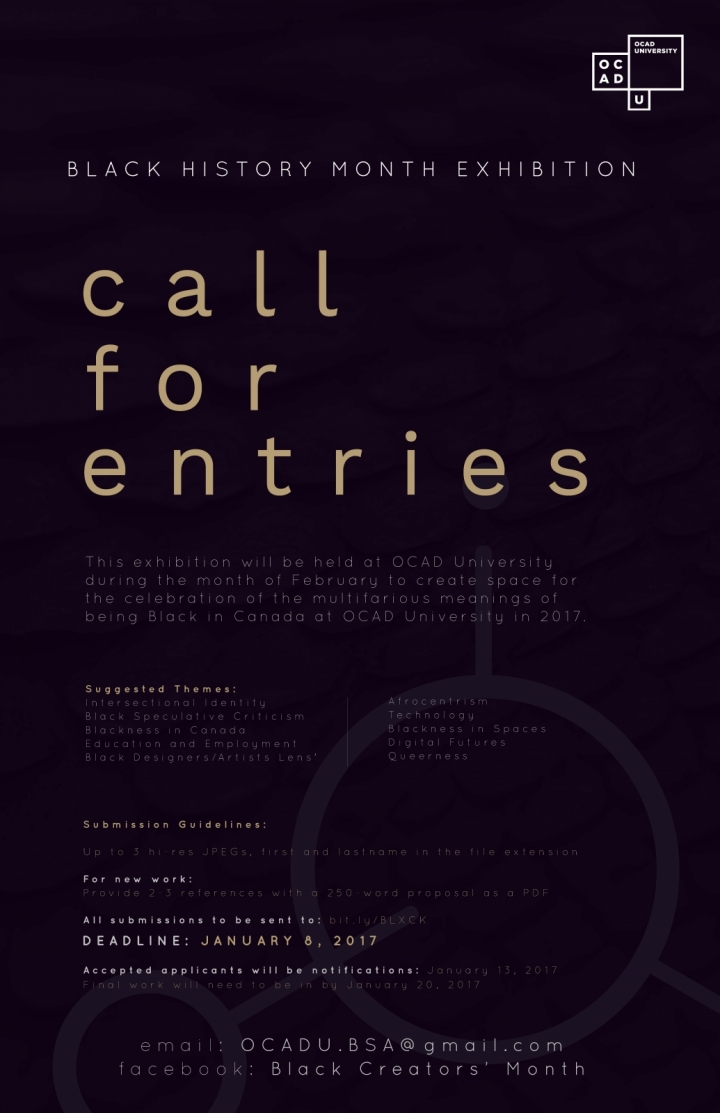 What is Afrofuturism and why do you need to know about it? 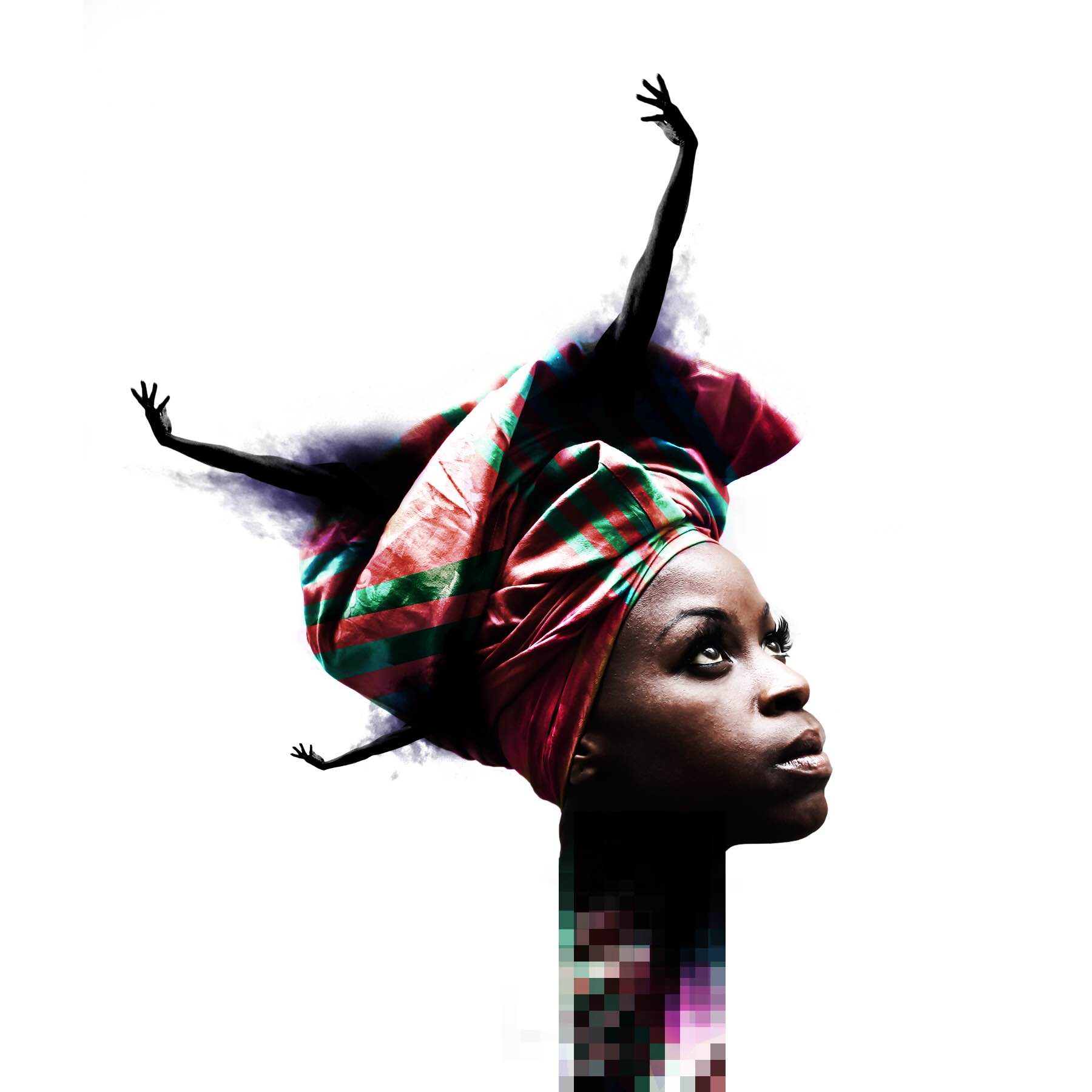 
Afrofuturism is many things, but the short definition is: an aesthetic movement with an Afrocentric, science fiction-inspired vision of the future.

This dazzling movement spans many media – from literature to film to music and, of course, the visual arts. Beautiful cyborg queens, spaceships that put Star Wars to shame and the most wicked sunglasses you can imagine are just a few of its signature features. 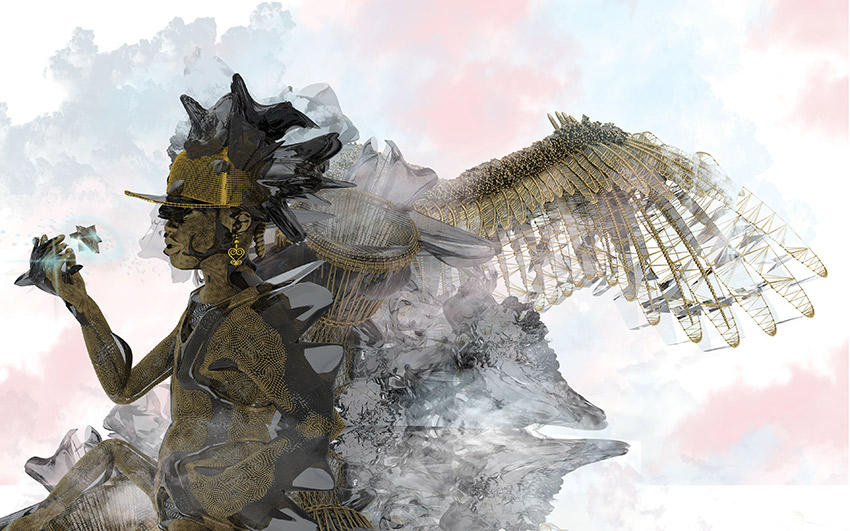 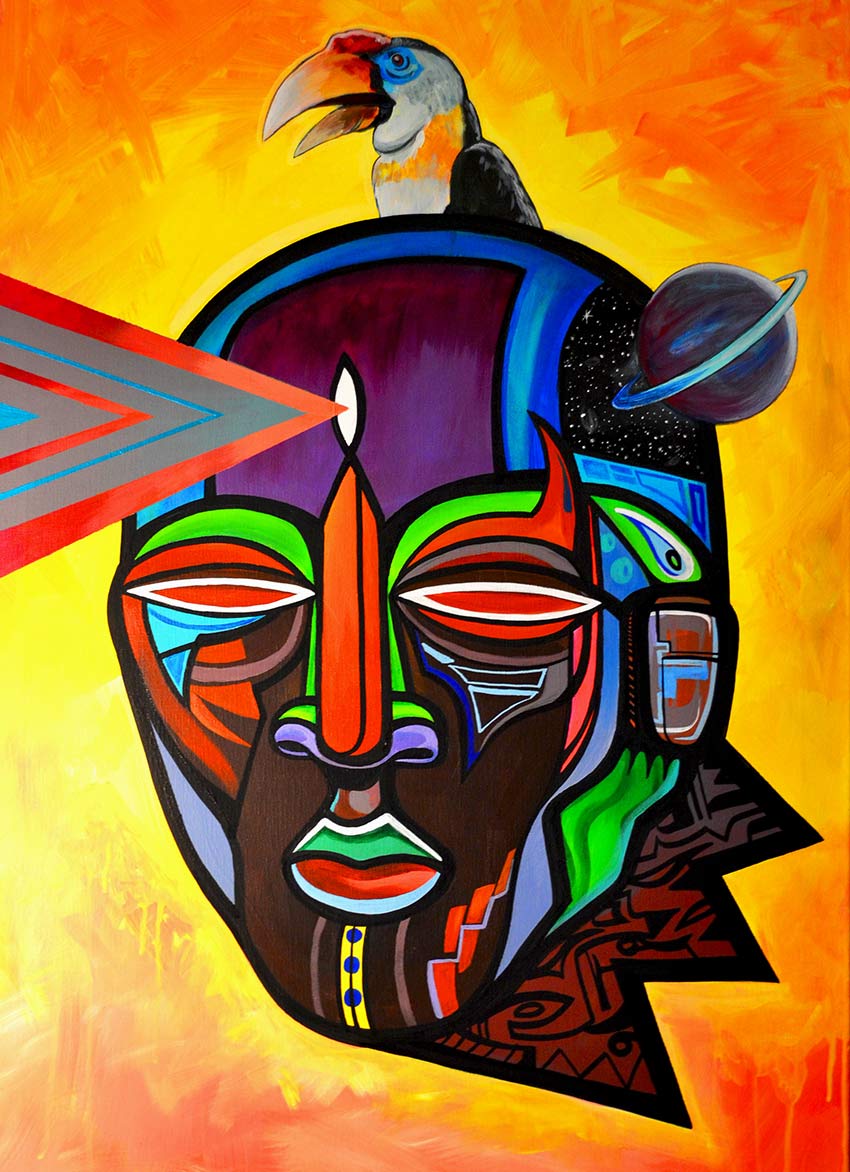 While there’s no denying that Afrofuturism is incredibly cool, behind all the gold and neon are some important messages. Born in the early 1990s, Afrofuturism is as much a critique of today as it is a vision of tomorrow. By painting a picture of a future populated with people of colour who have technologically enhanced bodies and superhuman strength, who drive opulent spacecrafts and live in worlds where power is not a struggle, Afrofuturism artists imagine a future that has left a problematic world of Euro-centrism, oppression and injustice in the past. 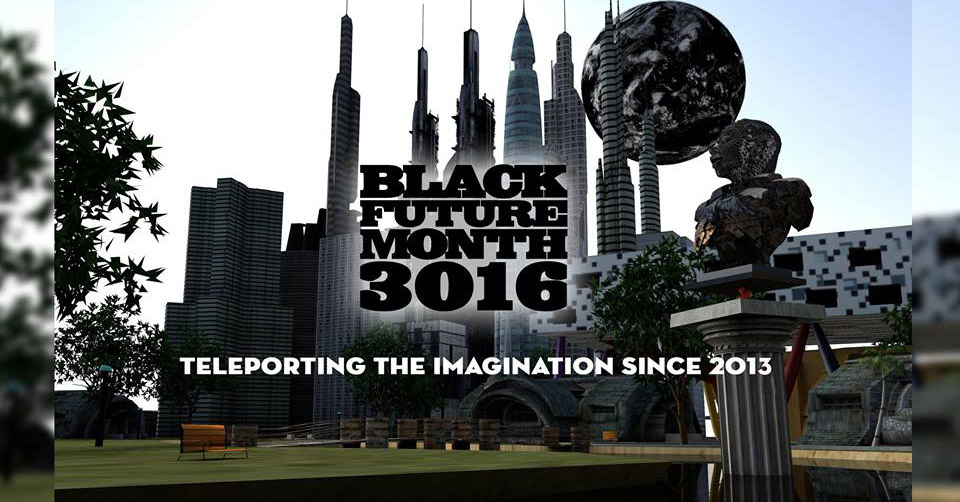 Afrofuturism’s fantastical futures are thriving at OCAD University. The exhibition Black Future Month 3016 opened on February 3 with a vibrant vernissage. Art by OCAD U’s own students and alumni, as well as international participants, are gathered together to present an energizing vision of the31st century.

The works in this exhibition are colourful, powerful and exciting. Though collectively the exhibition presents a rich visual tapestry of Afrofuturism, each piece is inspired by the lived experience of an individual and thus demands close looking and thoughtful reflection.

So, if this is the first you’ve heard of Afrofuturism, it surely will not be the last. Do yourself a favour and check out Black Future Month 3016 and the other exhilarating Afrofuturist happenings in your city. 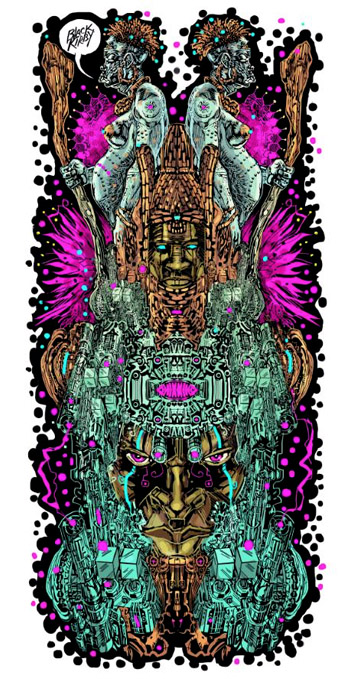 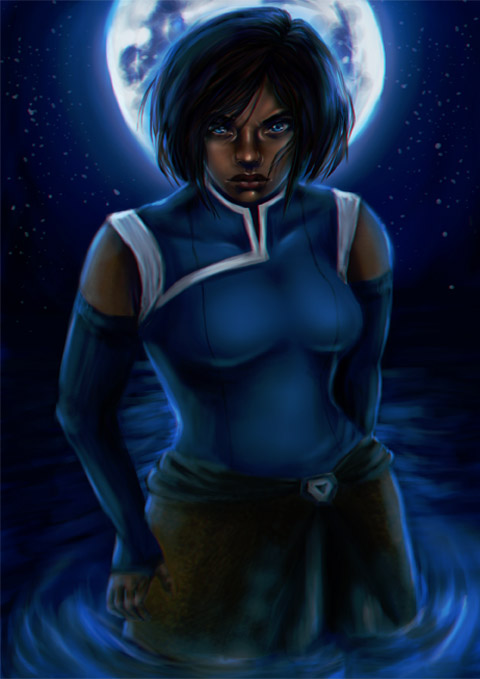 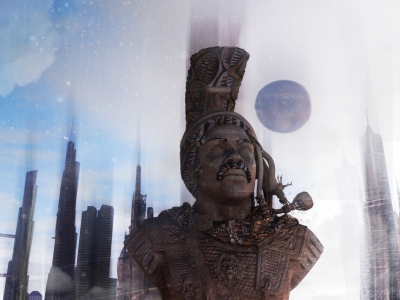 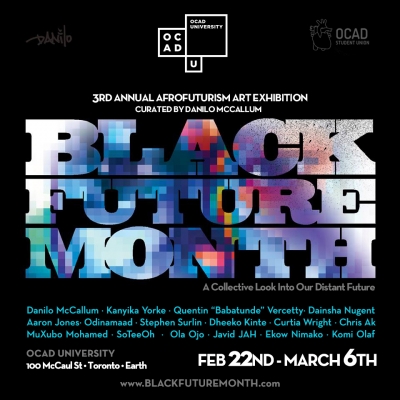 An Afrofuturism art exhibition hosted by OCAD U, Black Future Month 3015 provides a platform for artists who identify as black. Mediums span the spectrum and include painting, photography, 3D rendering, architecture, graphic design, a LEGO sculpture, video and sound.

Initiated and curated by OCAD U alumnus Danilo McCallum (Design and Visual Communications, 2005), the 16 artists showing in the exhibit, many of them OCAD U students and alumni, explore the Afrofuturism movement.

Afrofuturism, a term coined in 1993, is both a cultural aesthetic and a social movement.  Says McCallum, “It is the mothership of alternate forms of consciousness that black artists continually reference,” and includes literary and visual works of fantasy, magic realism and science-fiction, all of which interrogate the past, critique the present and imagine possible futures for the African diaspora.

Why 3015? McCallum explains: “It’s so far into the future that the intention is to disconnect from the social barriers we have today. What’s possible? What are the possible utopias?” McCallum says he got the idea for the exhibit, which also includes a free panel discussion on February 27th (“Orbiting Around Women in Afrofuturism,” moderated by OCAD U Professor Camille Isaacs), by taking a look at the trajectory of his own work in the realm of black sci-fi: “The idea came to me as a result of an ongoing internal conversation. I wanted to bring more interest back into Black History Month and extend that conversation outside of just the month of February.”

The title Black Future Month is not McCallum’s own but he says he is “committed to the long term vision of what [the initiative] could be. Looking into the future, the concept behind BFM is that every month is black future month. We hope the vision of Afrofuturism continues to grow and we’ve been encouraged by a larger public interest.”

McCallum worked closely with poet and artist Quentin VerCetty to organize the exhibit, and he credits Professor Lillian Allen of the Faculty of Liberal Arts & Sciences for helping to bring the Black Future Month initiative to OCAD U. Professor Allen says, "There are so many in the creative community out there who developed wings from their educational roots OCAD U. I think the Afrofuturism show is a great way to bring some of that dynamism and vitality back to our doorsteps."

This is the first time OCAD U has sponsored and hosted the third annual Black Future Month 3015. 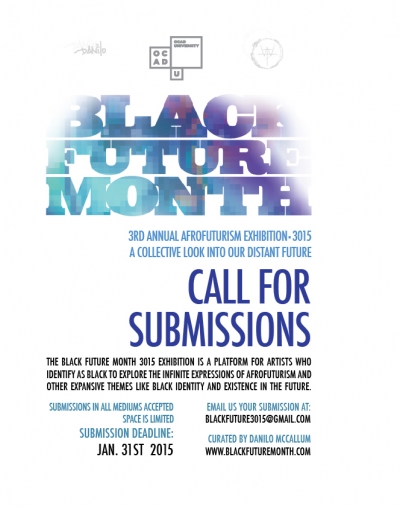 CALL for SUBMISSIONS
The Black Future Month 3015 exhibition is a platform for artists who identify as black to explore the infinite expressions of afrofuturism and other expansive themes like black identify and existence in the future.

Email us your submission at blackfuture3015@gmail.com

Curated by Danilo McCallum as part of Black History Month at OCAD U.