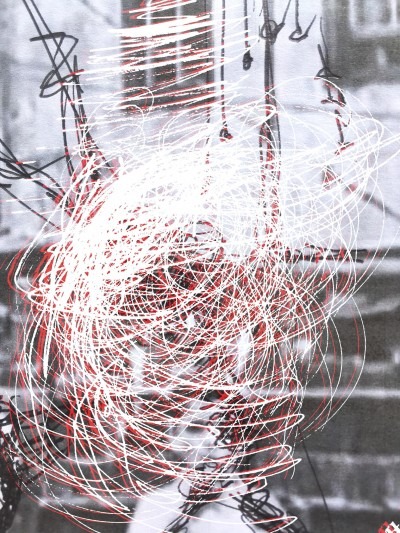 How might we explore the political and cultural implications of histories and stories, both personal and collective, around the intersection of land and cultural disruption and change? Often this historical and contemporary crisis is as a result of an inherited colonial legacy. The construction is about power. Many who were able to flee and/or were lured to Canada bear the trappings of the rewards they reaped from this place to which they migrated. But didn’t the acquisition of privilege and power have something to do with why they/we left in the first place?

Troubled by this complex relationship of land, loss and potential acquisition, undergraduate student Angie Ma (Faculty of Art), Assistant Professor Pam Patterson (Faculty of Art), graduate student Vicky Talwar and OCAD staff member Leila Talei (Officer, Research Projects, Office of Research & Innovation), as settler/immigrants, in exhibition and conversation, occupy a problematic liminal space, a space adrift. At a moment at OCAD U when we are embracing a holistic indigenous curriculum, such conversations are key to examining complex and often troubling relationships. This multi-media exhibit invites the community to explore their own histories and stories within this context in exhibition, conversation and workshop.

The OCAD University Graduate Gallery is open from 12pm to 5pm daily. 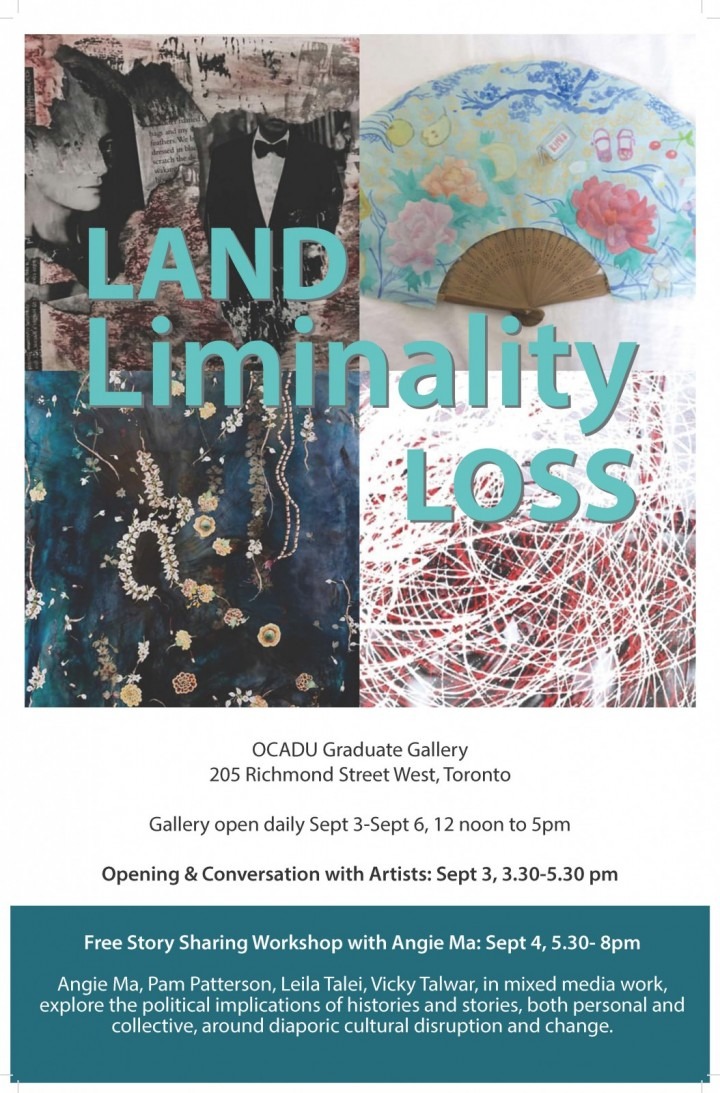 THIS IS RESEARCH, V2 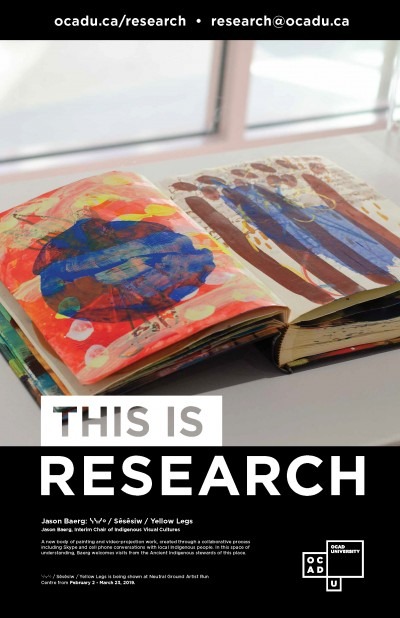 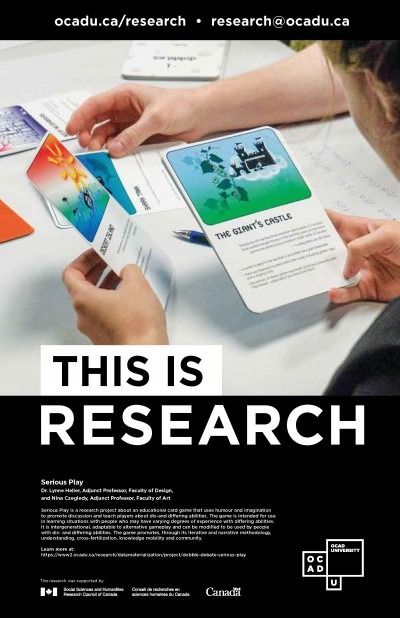 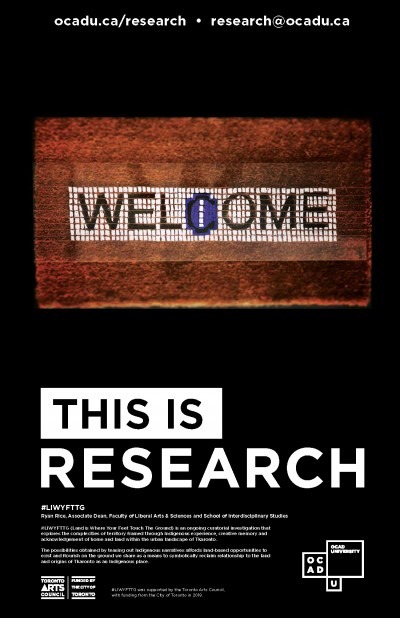 The Office of Research & Innovation is excited to announce the launch of the second iteration of the "THIS IS RESEARCH" campaign.

OCAD University faculty are engaged in inclusive, interdisciplinary and transdisciplinary research that audaciously and responsibly pursues the questions of our time.

THIS IS RESEARCH features posters and media showcasing the many forms of research at the University. You can see the first set of these on the many screens across campus and our website.

In concert with provincial efforts being coordinated through the Council of Ontario Universities, “THIS IS RESEARCH” will help to raise the profile of research performed across faculties by the creative professionals, scholars, and strategic thinkers that make up our research community.

If you would like your research to be profiled through “THIS IS RESEARCH” please contact our office at research@ocadu.ca.

ThisIsResearch - Sitting in a circle with Tahltan Ancestors on Tahltan Land.pdf
Poster: 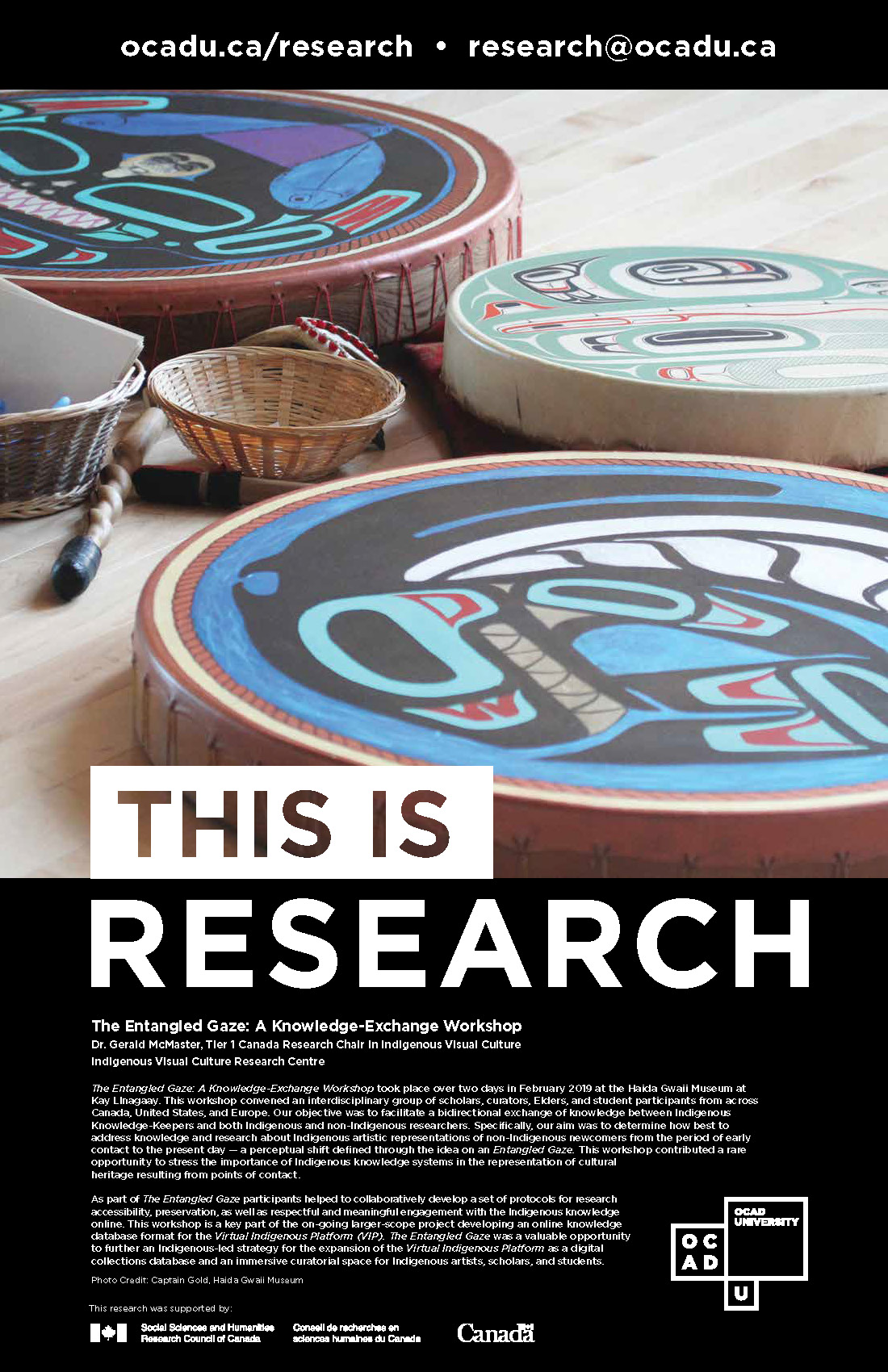 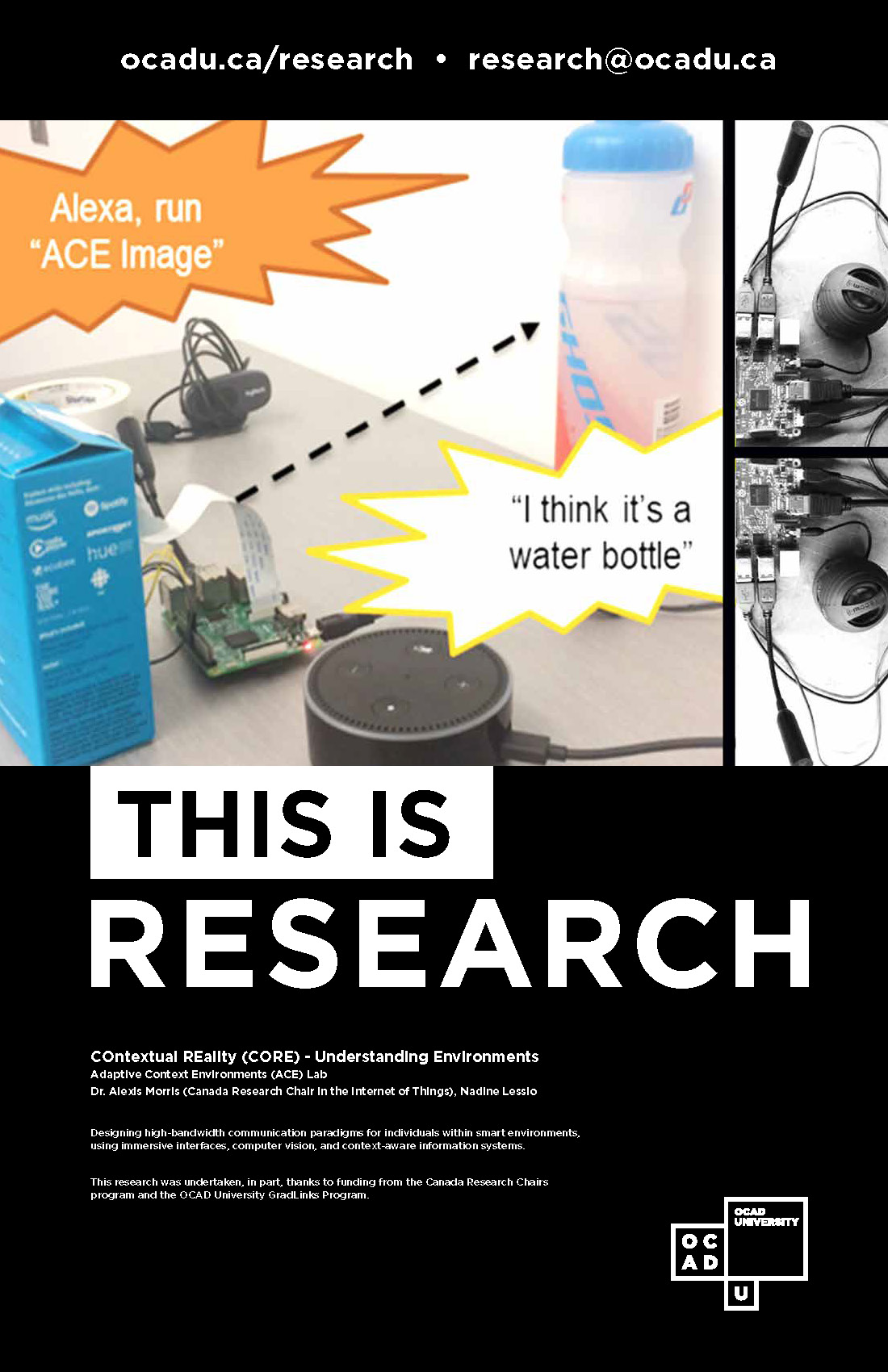 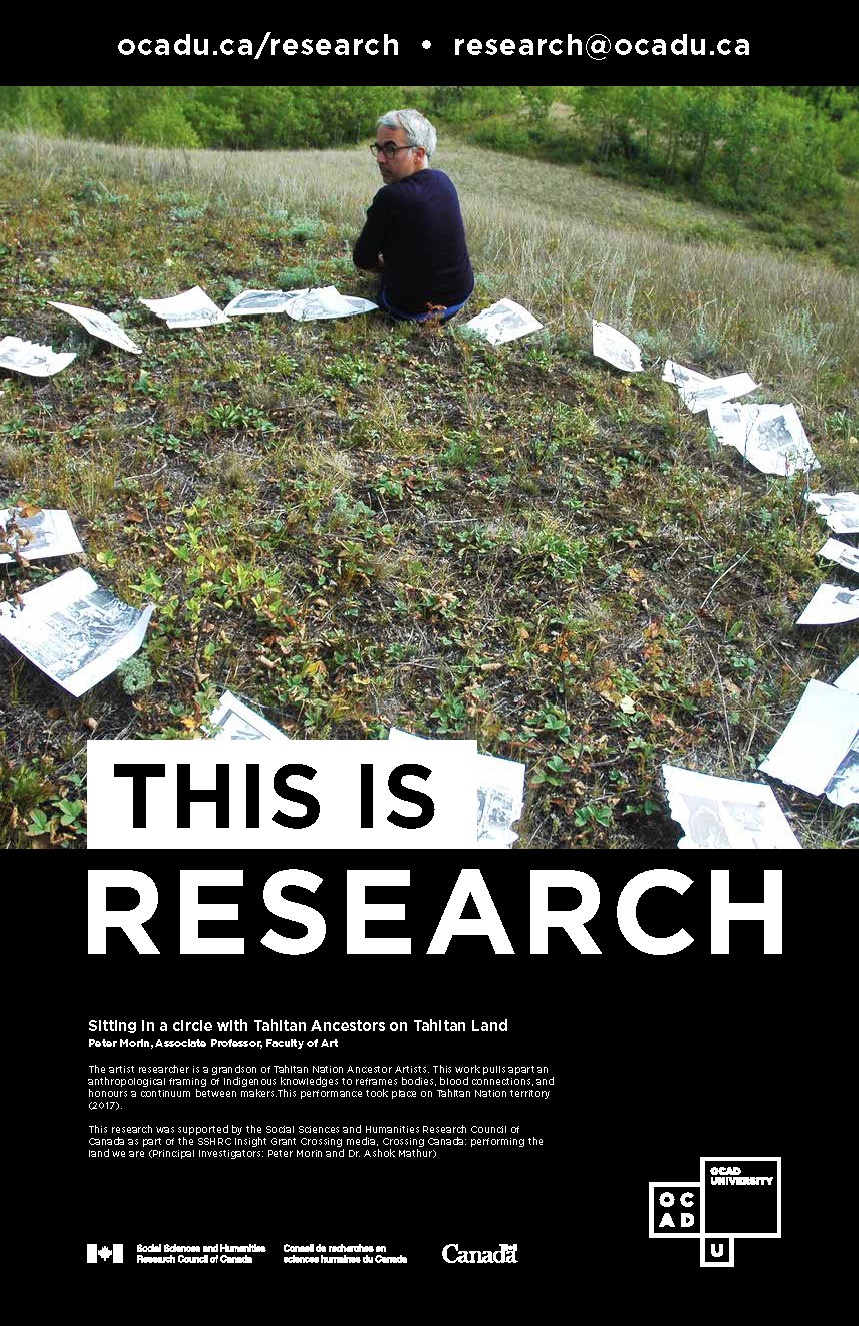 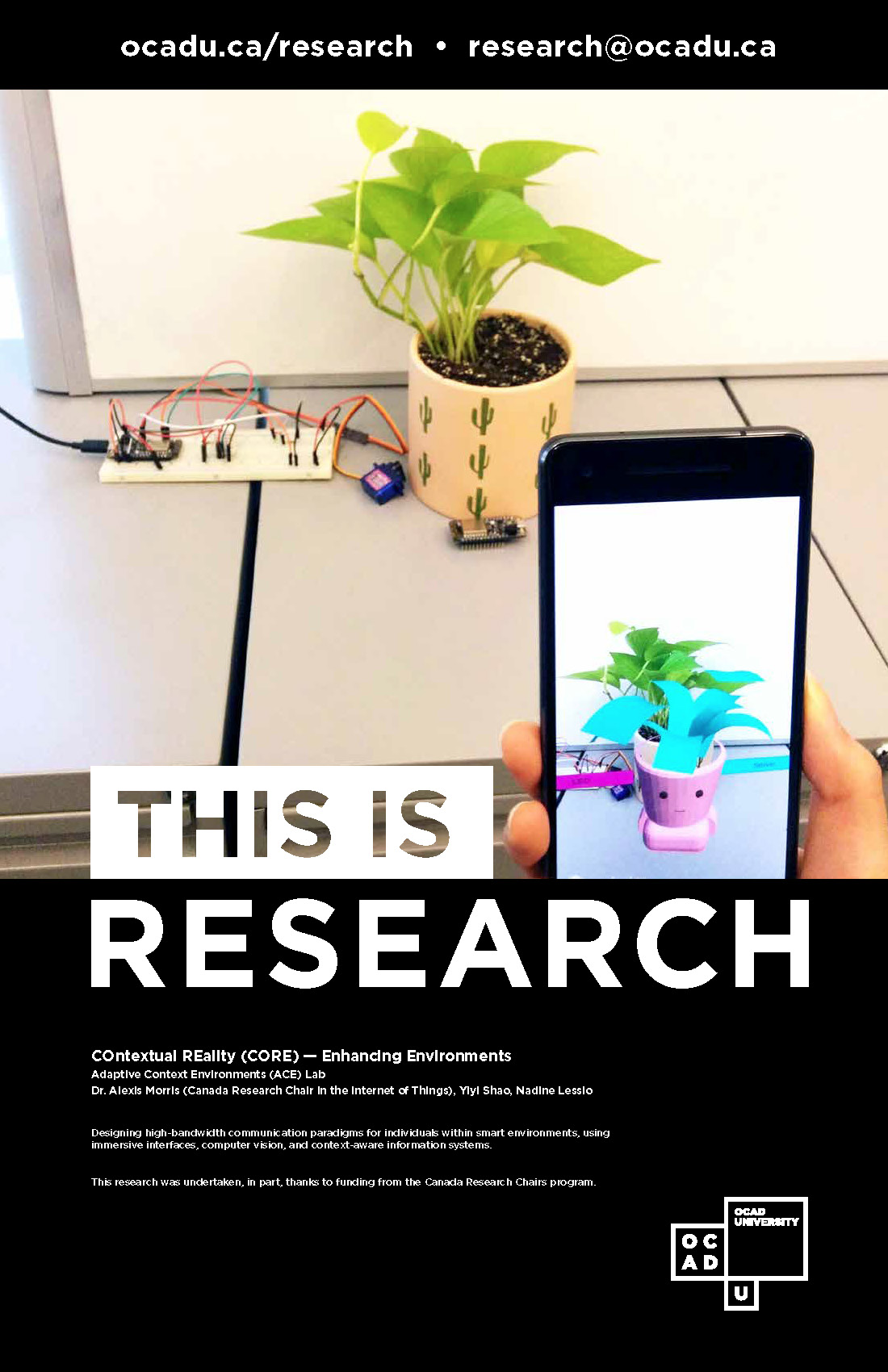 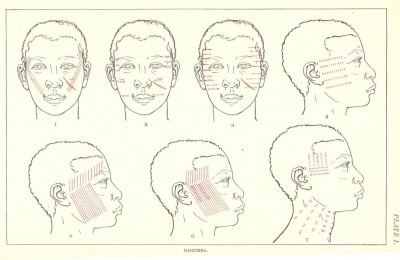 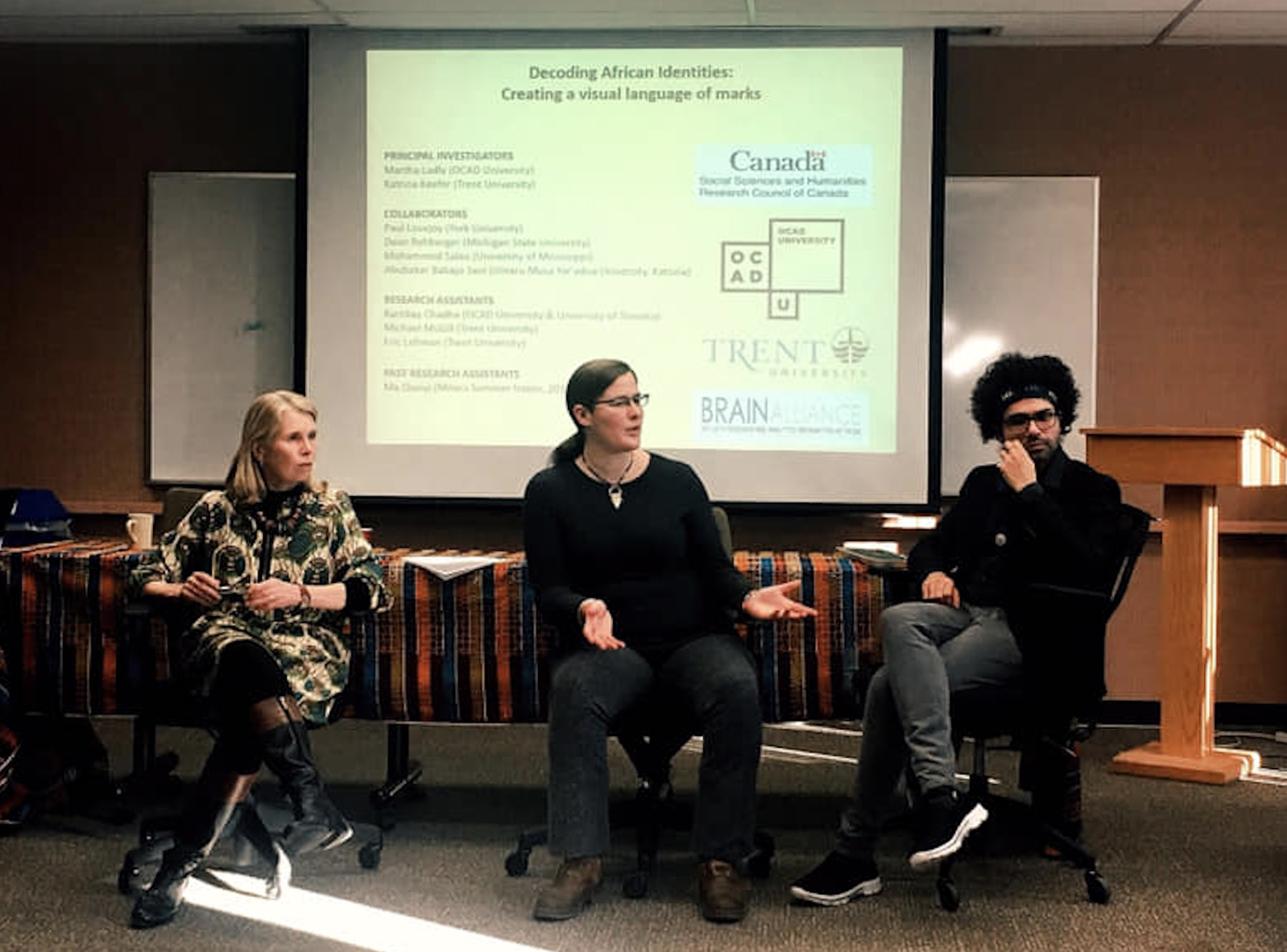 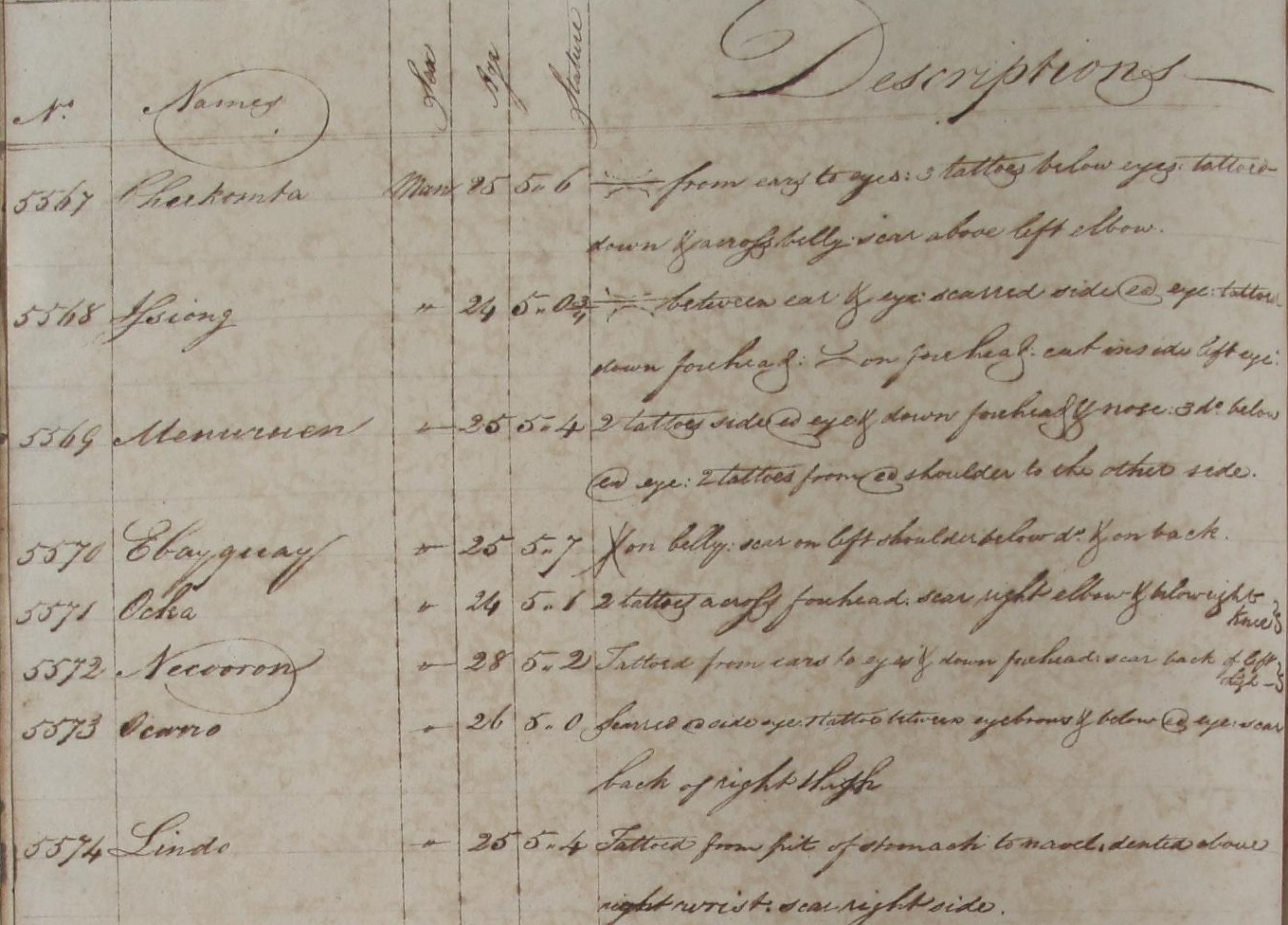 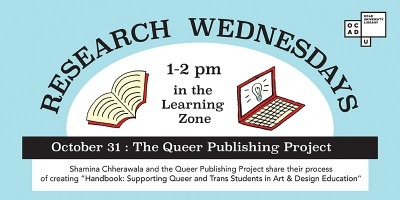 Join Shamina Chherawala and members of the Queer Publishing Project to learn about their process of creating Handbook: Supporting Queer and Trans Students in Art & Design Education, the first student-authored resource book of its kind. The guide draws from anti-oppressive education models to enable faculty to unlearn and critically address oppression on the basis of race, gender, and sexuality, and transform their understanding of how to support queer and transgender students in the studio, classroom, and beyond.

Handbook is a creation of the Queer Publishing Project, a research group of over 100 students, alumni, staff and faculty at OCAD University.

Research Wednesdays is a speaker series presented by the OCAD U Library. It's a forum for anyone (undergrad or graduate students, staff or faculty) to present in a supportive environment. Take a break over lunch to learn about new opportunities for Toronto creative researchers!

Interested in presenting at Research Wednesdays? We are currently programming our 2019 winter schedule (January to April). Send an email to Daniel Payne (dpayne@ocadu.ca) and include: 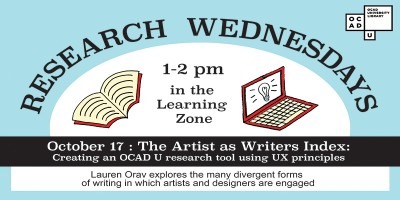 Celebrate the recent revisions of the Artists as Writer Index at the OCAD University Library. This resource is designed to explore the many divergent forms of writing artists and designers are engaged in, especially those that are affiliated with OCAD University.

Hear about the production of the database in 2015 with a taped intervew with the creator Farah Friesen, then hear how Reference Intern Lauren Orav revised the research portal using UX principles.

Research Wednesdays is a speaker series presented by the OCAD U Library. It's a forum for anyone (undergrad or graduate students, staff or faculty) to present in a supportive environment. Take a break over lunch to learn about new opportunities for Toronto creative researchers!

Interested in presenting at Research Wednesdays? We are currently programming our 2019 winter schedule (January to April). Send an email To Daniel Payne (dpayne@ocadu.ca) and include:

One of the most important aspects of university life is the sharing and discussion of ideas. The colloquium — or academic conference or seminar — represents an invaluable opportunity for graduate students to present their work. Each graduate program at OCAD University hosts such an event with the goal of having students discuss their thesis or MRP work. Open to the university and wider community, these colloquia are defined by intellectual rigor, the presentation of original ideas and work and critical discussions. 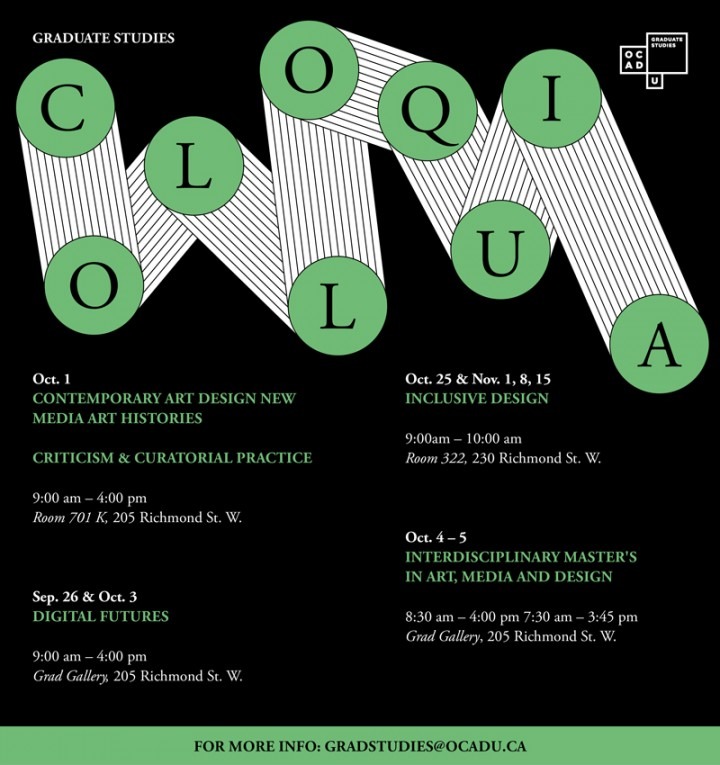 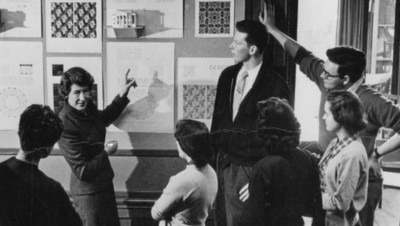 Librarian Adrienne Connelly will profile the many creative possibilities of the AGO's library collections, services, and programming. 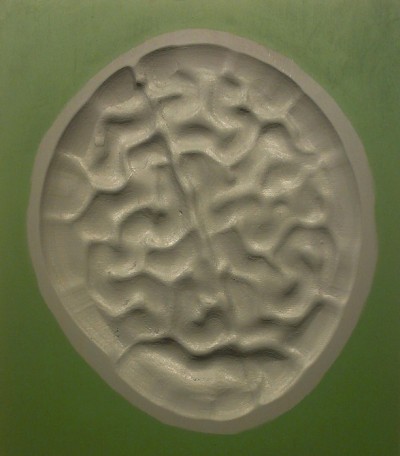 "I want to tell you a story about ideas and challenges. Ideas are the currency of creative people and only by acting on these Ideas can we create something of value."

Hear Matt talk about the power of art as a process of creation and healing.