This talk by Dr. Alexis Morris will introduce the need for a more human-centered focus in the development of smart, ubiquitous systems and highlights the opportunity to improve the bandwidth between system software and the people that it supports every day.

Dr. Alexis Morris is an assistant professor in the Digital Futures program at OCAD University, and the Canada Research Chair (Tier II) in the Internet of Things. He is the director of the Adaptive Context Environments (ACE) Lab, where his team spearheads core research in adaptive interfaces and collaborative approaches to smart context-aware environments, for a host of domains, advancing the Internet of Things. He is a computer scientist, specializing in the overlapping research domain of software engineering for adaptive systems based on the incorporation of fuzzy human-factors in socio-technical systems, bridging a cross-section of approaches in artificial intelligence (i.e., soft-computing via neural networks and fuzzy logic), virtual and augmented reality, passive brain-computer interfaces, adaptive risk management, multi-agent systems modelling, organizational culture simulations, and pervasive technologies.

What is the Internet of Things (IoT)?

Simply put, the “things” in Internet of Things are the everyday objects in your house, only hooked up to the internet. It’s really that simple. So think a thermostat that can be controlled from an app on your smartphone (handy on those cold winter mornings) or a coffee maker that switches itself on when it can tell you’ve gotten out of bed (Source: Cloudwards.net).

Human-Centered IoT: Designing for the Human-in-the-Loop is a part of Research Wednesdays speaker series presented by the OCAD U Library. It's a forum for anyone (undergrad, or graduate students, staff, or faculty) to present in a casual, supportive environment about research activities, collections and more. We apply a broad definition of research which includes a variety of activities within the domains of art, design, libraries and archives. This event is open to all members of the OCAD U community as well as the general public.

Do you have a research experience that you would love to share with us? Contact Daniel Payne at (dpayne@ocadu.ca)

Caroline Seck Langill is a Peterborough-based writer and curator whose academic scholarship and curatorial work looks at the intersections between art and science, as well as the related fields of new media art history, criticism and preservation. She is known for the way her writing considers machine aesthetics and scientific approaches to cultural production and histories. Her website Shifting Polarities, produced while researcher in residence at The Daniel Langlois Foundation, tracks the history of electronic media in Canada and includes interviews with pioneers of media art. With Dr. 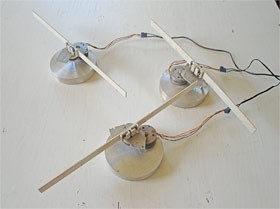 For this years biennial we have chosen works that in a unique way are complex in their own small universes – and makes us think about what we often takes as given.

The biennial holds a common theme about time and ongoing processes. In the exhibition, the viewer is invited to experience works that are independent machines slowly working in a methodic way, alongside objects that are animated with, for example, motors and light. Yet others are controlled with mathematical rules. A number of the works play on a change in our perception of time or of our physical existence. 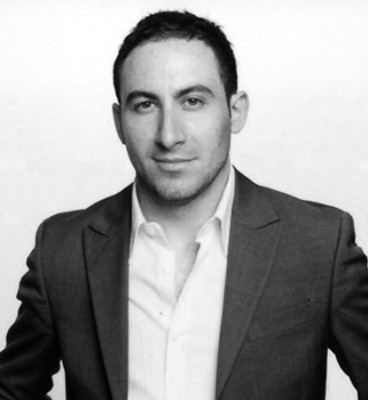 Sara Diamond, President of the Ontario College of Art & Design invites you to attend a free lecture by Adam Bly, founder and Editor-in-Chief of Seed Media Group. Bly is the first of three keynote speakers in the 2008–2009 President’s Speaker Series.
At the age of 16, Adam Bly became the youngest researcher at the National Research Council Canada (NRC), where he spent three years studying cell adhesion and cancer. While at the NRC, Bly identified a cultural shift in the making: Science is transforming business, politics, the arts and current affairs unlike ever before; today, science affects every single person on the planet and science literacy is essential to modern society.
“We are on the cusp of a 21st century scientific renaissance marked by accelerated advancement in neuroscience, theoretical physics and genetics, a culture war between science and religion, and the application of science as a tool for social change and economic development,” says Bly. “What is catalyzing this cultural shift, who is leading it, and where are we going from here?”
The President’s Speaker Series continues on February 5 with Lisa Jevbratt, new media artist and Associate Professor, University of California at Santa Barbara, and on March 5 with Marie Battiste, Professor and Director of the Aboriginal Education Research Centre (AERC) at the University of Saskatchewan and Co-director of the Aboriginal Learning Knowledge Centre.

Luke moved to Toronto from Montreal when he was 16 to study at the National Ballet School. After graduating, he worked in Europe and spent five years working at the Toronto Dance Theatre. Luke has been freelancing since then in modern dance, music videos and theatre.

“I’ve always been interested in technology,” says Luke. “The dance world and its ephemeral quality has its limitations — it exists only while it’s being performed. With digital tech becoming more immersive, this can change.”

Luke’s ideas about how digital media can help dancers 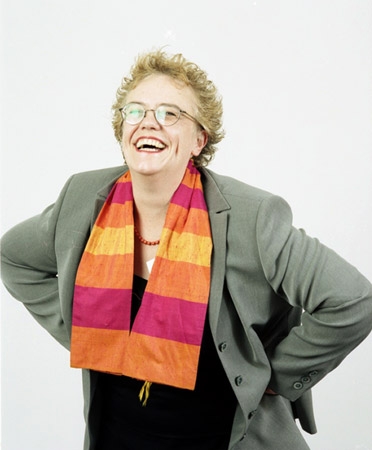 Dr. Jefferies presentation will focus on current practice and research projects across arts and technology, focusing on international partnerships and collaboration that have been developed over time and trust with a broad range of constituents.

Janis Jefferies is an artist, writer and curator, Professor of Visual Arts and Research, Research Fellow at the Constance Howard Resource and Research Centre in Textiles, associate pro warden for culture and creative industries at Goldsmiths, University of London, UK. She trained as a painter (Sheffield School of Art, Maidstone College of Art and Camberwell College of Arts and Crafts) and in woven construction (Poznan Academy of Fine Arts, Poland) under Magdalena Abakanowicz. On return to the UK in 1978 she pioneered the field of contemporary textiles within visual and material culture and has exhibited and published widely. Her areas of expertise lie at the intersection of arts and technology (textiles, performance, sound, publishing). She was one of the founding editors for Berg (now Bloomsbury) publishers of Textile: The Journal of Cloth and Culture and most recently was co-curator of the first Hangzhou Triennial in China in 2013. She was a Creative Thinking Fellow, University of Auckland.
See http://www.gold.ac.uk./computing/staff/j-jefferies/ 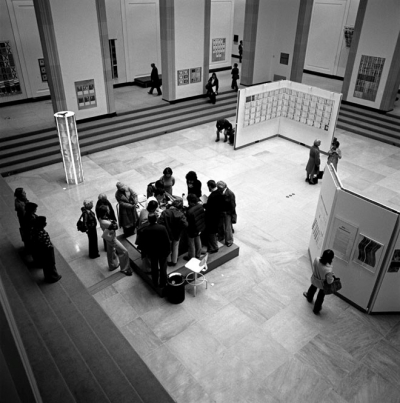 The work of Barbara Astman will be exhibited as part of the Art Gallery of Ontario's new installation "Look Again: Colour Xerography - Art Meets Technology at the AGO".

In the mid-1970s several young Canadian artists embraced the cutting-edge technology of the colour Xerox machine. Six of them - Robert Arn, Barbara Astman, Flavio Belli, Michael Bidner, Michael Hayden and Jaan Poldaas - joined forces with curator Karyn Allen during an exciting two-week exhibition at the AGO in the fall of 1976. As an art medium, xerography made it possible to produce inexpensive copies of virtually any image or object. It allowed artists to play with images from the mass media, recombining or altering them for their own use. Visitors today will recognize this art form as a precursor to the pervasive circulation of digital images today.

This installation draws upon our rich archival holdings of Astman and Bidner from the 1976 exhibition.

The Experience of Climate Change at the Intersection of Art & Neuroscience

How do we experience climate change? How does the nature of our experience influence our ability to take action? How might insights from art & neuroscience inform our leadership on the issue?

Join us for March's DwD  with hosts Ross Curtner and Scott Baker of Adjacent Possibilities. Set to the back drop of international climate negotiations, we will explore the physiological and civic experiences of climate change. From here, we deploy insights at the intersection of art and neuroscience to imagine alternatives. Drawing inspiration from systems thinking and game design methodology, the session will provide participants the opportunity to prototype the mechanics, dynamics and aesthetics of renewed relationship with this complex issue.

Insights generated from this workshop will be used to inform the design of Adjacent Possibilities' next exhibition at the Cop21 climate negotiations in Paris, November 2015.

About The Hosts
At heart, Ross Curtner is a facilitator, curator and purveyor of purposeful play. Putting these passions to work he’s lead strategic planning retreats for cleantech investment and business development groups, designed leadership experiences for arts foundations, consulted for government and recently, co-founded Adjacent Possibilities, an agency which connects artists and entrepreneurs to enable new approaches to complex challenges. An alumni of MaRS’ Studio Y Fellowship, he previously worked at The Stop and Community Food Centres Canada. When he’s not scheming of creative ways to address big issues, you can find Ross exploring Toronto’s forests with the PINE Project. @RossCurtner

Scott Baker was raised on wind-licked west-coast of Vancouver Island and has since been working at the intersection of climate policy and civic engagement with the Canadian and European Green Parties, Leadnow, and Tides Canada. Currently Scott is a StudioY Fellow at MaRS Discovery District and the co-founder of Adjacent Possibilities. 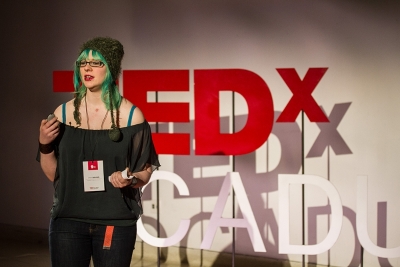 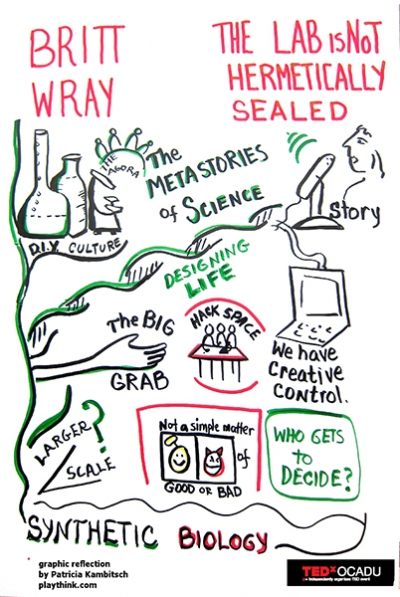 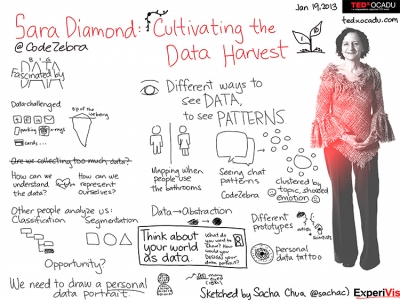 Miss the inaugural TEDxOCADU? The sold-out event, held January 19 in the auditorium at 100 McCaul, can be viewed as a series of visual recaps on theTEDxOCADU website. Sketchnote artist Sacha Chua summarized each speaker’s talk in hand-drawn synopses, while Patricia Kambitsch captured the talks as graphic recordings. Videos of the talks will be added soon.

In the spirit of ideas worth spreading, the independently organized TED (Technology, Entertainment, Design) event was curated by Medina Abdelkader, an OCAD U MDes candidate in Strategic Foresight and Innovation, together with a hard-working team of 25 other coordinators.

“It was phenomenal to see everything come together the way it did,” says Abdelkader. “I’m so inspired by this group of people – the speakers, performers, emcees, visual recorders, organizers – who dedicated hours and hours of their time to put this together."

This year’s theme was “simplexity,” the delicate tango between simplicity and complexity representing the vulnerabilities and strengths born from increasingly diverse circumstances. Speakers were selected for proposals of big ideas with the potential to change the world. According to Abdelkader, these ideas reflect a shared human experience and resonate with audiences.

Delegates also had to prove themselves by applying to attend. To choose, Abdelkader’s team blacked out names and based decisions on thoughtful, meaningful answers. It came down to what each person said, not who they were, or their position in the university.

Along with the talks, the event featured performances by Melanon (musicians Lodewijk Vos and Joseph Murray together with singer Little Scream) and spoken word artist Quentin Vercetty.

TED is an international non-profit organization that started as a four-day conference in California 25 years ago. It invites the world’s leading thinkers to speak for 18 minutes and broadcasts the talks free at TED.com.

The TEDxOCADU team is already discussing how to build on their successes (and lessons learned) in coordinating another event for next year.