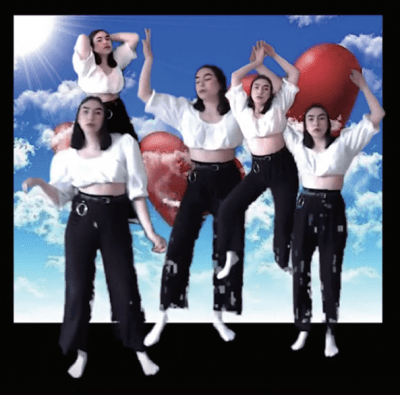 Exhibition Description:
connection_found is an online group exhibition organized by feelSpace featuring works by Ronnie Clarke, Taylor Jolin, Leia Kook-Chun, Madeleine Lychek and Paula Tovar, Noelle Wharton-Ayer, and Becca Wijshijer. At times humorous, and other times tender, these meditations illustrate the quirks of navigating intimacy in the digital realm as it inadvertently relates back to the body in the physical world. As the name connection_found implies, the works within this exhibition understand connection and intimacy in broad subsets: a found connection between an individual and their complicated cultural history (Wharton-Ayer), between lovers separated by an ocean (Lychek and Tovar), between strangers online (Kook-Chun), between the corporeal and the digital (Clarke), between where we are and where we’ve never been (Jolin), and with alternate versions of ourselves (Wijshijer). Together, these works trace and re-trace digital intimacy, touch, and the body as it moves and navigates towards the virtual realm.

More literally, connection_found also suggests the curatorial alignment of these works in a digital context which, in and of itself, requires finding connection. At the core of the exhibition, connection_found simultaneously expands, individuates, and links the collective experience of existing on the internet.

feelSpace:
feelSpace is an ad hoc interdisciplinary curatorial collective based in Tkaronto at OCAD University. The collective is interested in the implications and potential of curatorial practice within, through, and around digital spaces.

This exhibition is a project related to CRCP-6004, Intro. to Curatorial Practice 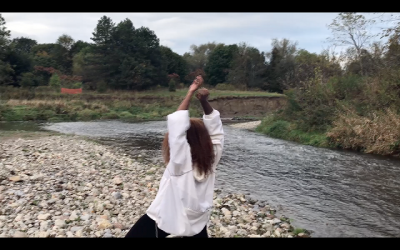 Undercurrents is a billboard exhibition created for The Bentway’s Community Incubation Program as part of the 2019 Fall Season, titled Second Nature. Looking to the influence from nearby Niigaani-gichigami/Lake Ontario as a lifebody, Undercurrents asks: what memories does this land and water hold? Whose histories are well documented, and whose are submerged?

Featuring a series of three double-sided billboards, the exhibition presents the work of four artists based in the Greater Toronto Area: Susan Blight, Erika DeFreitas, Melissa General and Jessica Karuhanga. Situating their physical bodies and cultural narratives in relation to water around Tkarón:to/Toronto, the artists re-assert ancestral histories, examine current contexts, and imagine future relations with water. Each billboard can be interpreted as simultaneous moments in time: the past, the present, and the future; demonstrating that histories continually resurface. Looking to the moon, the muse to water’s rhythms, time can be thought as a cycle—emerging and re-emerging, telling and re-telling—rather than points in a linear narrative.

Niigaani-gichigami/Lake Ontario is a confluence of rivers—a meeting place for Indigenous societies for over 11,000 years. While settler histories of the lake and surrounding area are widely known, Indigenous and Black histories in relation to this body of water have been submerged. Many Torontonians are disconnected with the lake’s various histories, and Undercurrents aims to revive their importance. The exhibition challenges colonial narratives of Tkarón:to/Toronto by highlighting artists who re-map understandings of this region by unearthing the past to imagine the future. Undercurrents re-aligns concepts of duration with natural cycles, scheduling the exhibition around the scope of September’s full moon to new moon lunar cycle (September 10 - 30).

About the curators:
Undercurrents is curated by Courtney Miller and Valérie Frappier, second-year graduate students in the Criticism and Curatorial Practice program at OCAD University. As a curatorial duo of both a recent newcomer to Tkarón:to/Toronto and someone who grew up in its northern suburbs, they cultivated a shared interest in uncovering histories of the land on which they currently live and work. Citing re-mapping strategies as a collaborative practice, their curatorial work aims to challenge colonial narratives while centering embodied knowledges and realigning with natural cycles. 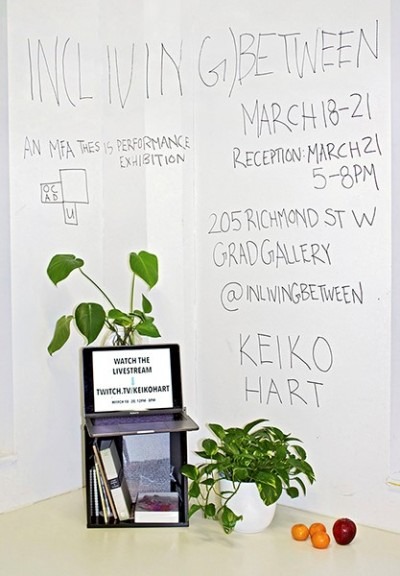 The multiracial individual occupies the space of the in(-)between—a frontier of perennial opportunities for progressive resistance. It is neither here nor there, not the occident or the other, but both: the hyphen. Expectations exist that if a visible indicator of someone's identity is not immediately present, it should manifest conspicuously. When the hyphen performs, it does so from an in(-)between space that is observable when written out, yet invisible when spoken aloud. But that does not mean it does not exist. in(Living)between is a stream-of-consciousness writing-on-the-walls performance live-streamed from a contained room that seeks to enact hyphenated identity through lived experiences of (mis)interpretations, (mis)pronunciations and (mis)identifications.

While the Graduate Gallery where the show is taking place will be closed off during the performance, the adjacent media room will project a live-stream of what is taking place inside that may be viewed there or accessed from anywhere in the world. The performance room will be revealed at the catered reception on March 21 in collaboration with Common Room where refreshments and snacks will be provided. The room will be left open for display with a recorded projection of the performance in the media room over the following weekend.

Keiko Hart is a graduate candidate in criticism and curation at OCAD University where they were awarded the President’s Scholarship. They work in artistic direction and program management at various non-profits that promote collaborative practices between dynamic arts innovators.