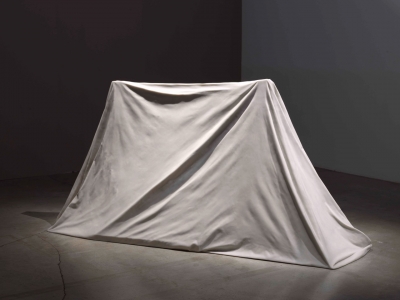 During the residency, Ryan will be working on a collaborative project with students exploring the idea of enforcing a methodology to art making ‘Auto-Abstraction And Happenstance In Art Making’ is about finding systems and devices that exist in the everyday world that create art through happenstance.

About Ryan Gander – Ryan Gander’s complex and unfettered conceptual practice is stimulated by queries, investigations or what-ifs, rather than strict rules or limits. For example, what if a child’s den of sheets were remade in memorialising marble (Tell My Mother not to Worry (ii), 2012)? What if all the pieces in a chess set were remade in Zebra Wood, so that neither side was entirely black nor white (Bauhaus Revisited, 2003)? Gander is a cultural magpie in the widest sense, polymathically taking popular notions apart only to rebuild them in new ways – perhaps by refilming the same ten-second clip 50 times over, as in Man on a Bridge (A study of David Lange), 2008. Language and storytelling play an overarching role in his work, not least in his series of Loose Association lectures or in his attempt to slip a nonsensical, palindromic new word, ‘mitim’, into the English language. Born in Chester in 1976, Ryan lives and works in London. Ryan Gander is represented by Lisson Gallery, London. 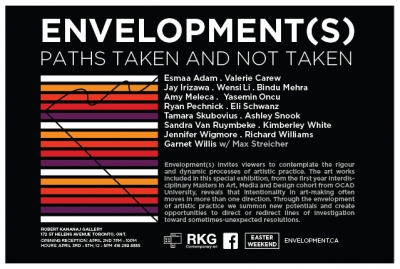 Envelopment(s) invites viewers to contemplate the rigor and dynamic processes of artistic practice. The artworks included in this special exhibition, from the 1st year Interdisciplinary Master's in Art, Media and Design cohort at OCAD University, reveal that intentionality in art-making often moves in more than one direction. Through the envelopment of artistic practice we summon new potentials and create opportunities to direct or redirect lines of investigation towards sometimes-unexpected resolutions.