Please join us for a wide-ranging discussion between artist Santiago Sierra and curator Paco Barragan.

Known for antagonistic actions with controversial ethical complications, Sierra strategically intervenes into the everyday operations of power. His unnerving spectacles expose systems of marginalization and exploitation that are, for the most part, implicit and underacknowledged. Many of his works deliberately test the tolerance of institutional authority, to the point that adversity – including shut-downs and refusals – is integral to their critique and effectiveness.

Santiago Sierra's performances, installations and interventions have been featured internationally at venues such as Ikon Gallery, P.S.1/MoMA, Museo Rufino Tamayo, the Irish Museum of Modern Art, the Museo Nacional Centro de Arte Reina Sofia, the ICA (London), and the Sharjah and Moscow biennials. At the 2003 Venice Biennale, he exhibited at the Spanish pavilion. Sierra's installation, "100 Plastic Containers for Human Corpses" (2016), will be featured in this year's Nuit Blanche.

Paco Barragan is a curator at Matucana 100, Santiago de Chile and Contributing Editor for ARTPULSE magazine. His recent exhibitions include "Intimate Strangers: Politics as Celebrity, Celebrity as Politics" (Matucana 100), "Guided Tour: Artist, Museum, Spectator" (MUSAC Leon), and "Erwin Olaf: The Empire of Illusion" (Museo Castagnino-MACRO Rosario). Barragan is the author of The Art to Come (2002), and The Art Fair Age (2008), and is curating "Militant Nostalgia" for Nuit Blanche.

Seating for this event is limited. 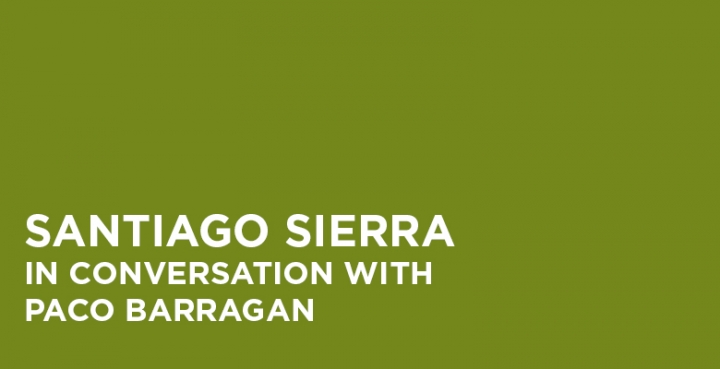 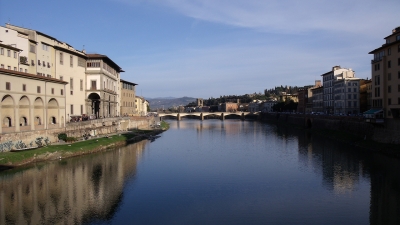 Please join us as we connect with our Florence Off-Campus Studies group for 2015-2016 via live video conference to discover the wonderful work that is being created in our Florence Studio this year.  Coffee and treats will be available!

Come celebrate art for social change at OCAD University! Join us for this exhibition/performance/conversation to experience how OCAD U students and Toronto’s creative thinkers use the arts to spur positive change in our communities.

CBC TV’s weekly program, Exhibitionists, features Canadian artists, both emerging and established, as they reshape our country's artistic landscape. The show explores the most exciting cultural happenings across Canada through a passionate lens.

Event is FREE, all are welcome.
Light refreshments will be served.

Reelworld Film Festival
www.reelworld.ca
Reelworld Film Festival celebrates films from around the world that explore pressing issues and stories with social impact. The festival features a convergence of film, art, music, technology and conversation - bringing together an inclusive community of storytellers, educators, non-profits, social entrepreneurs, artists and philanthropists, to catalyze social impact through film and storytelling.

Onsite Gallery
www.ocadu.ca/onsite
Onsite Gallery exhibits professional artists, designers and digital media makers, serving the OCAD University community and the general public. In preparation for the launch of Onsite Gallery’s new location in May 2017, our 2016 ONSITE/ programming imagines and creates what a public gallery can be.

OCAD University's Art & Social Change Program
www.ocadu.ca/academics/minors/art-social-change.htm
A minor in Art & Social Change offers students the opportunity to explore some of the most pressing social, political and ethical issues of our time. With the tenets of equality, diversity and social and environmental justice at the heart of this minor, and an investigation of the role that art and artists have and can play as catalysts of change, students pursuing this minor stand to expand the liberating powers of dialogue, dissent and collaboration as cultural practitioners engaged in local, national and global contexts.

CBC Inclusion & Diversity
www.cbc.ca
We are committed to reflecting Canada’s diversity through our people, our programming content and our community relationships. 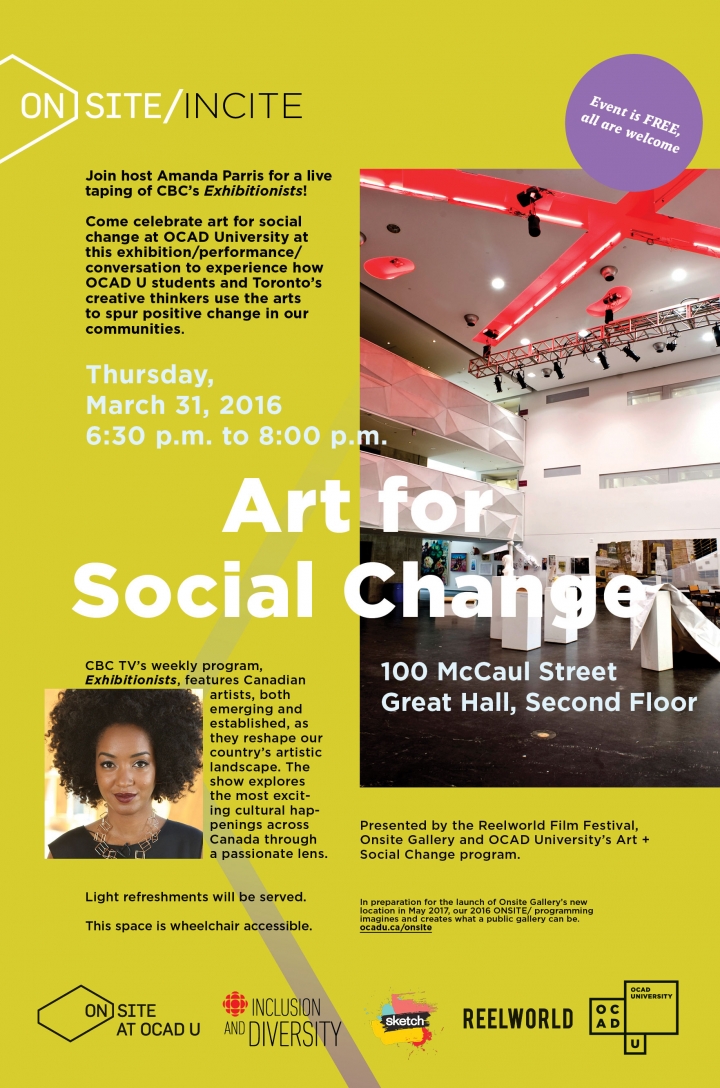 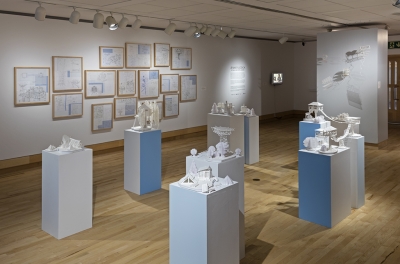 Join Artist Jennie Suddick with Curator Anik Glaude for the final event of a three-part series addressing our permanent and seasonal exhibitions. This program focuses on Jennie Suddick's 'Of nails and rope laders' exhibition currently on view at the Varley Art Gallery (FREE)
For more information about this exhibition click here: http://bit.ly/1VExSSh

(Toronto — September 27, 2010) The Faculty of Art at OCAD University (OCADU) launches Art Creates Change: The Kym Pruesse Speaker Series with a talk by filmmakers Ambarien Alqadar and Samina Mishra, in conversation with Richard Fung, on Wednesday, October 13 at 7 p.m.

Ambarien Alqadar and Samina Mishra’s presentation “Documentaries from Jamia Nagar” asks the question, “What are the dilemmas faced in making documentaries about one’s own neighbourhood when that community is a loaded site of refuge, stereotyping and police repression?”

Alqadar and Mishra both graduated from the prestigious AJK Mass Communication Research Centre (MCRC), which houses India’s only MA program in film and television. The MCRC and its host university Jamia Millia Islamia are located in the neighbourhood of Jamia Nagar, increasingly referred to as Delhi’s Muslim ghetto. As filmmakers with roots in Jamia Nagar, their complex and probing documentaries address both “insiders” and “outsiders” in raising difficult questions about gender, sexuality, class, religion and nation.

Alqadar will screen excerpts from Who Can Speak of Men, about women who cross dress, and Between Leaving and Arriving, which probes the infamous “Batla House encounter,” in which neighbourhood youth were killed by police. Mishra will screen from A House on Gulmohar Avenue, which uses her own story as the great granddaughter of Dr. Zakir Hussain, India’s first Muslim president and a founder of Jamia Millia Islamia university, to explore what it means to be a Muslim in India today, and Come, Walk Through Our Streets, produced with children from Jamia Nagar.

These screenings will be followed by a conversation on the ethics and politics of neighbourhood autoethnography with Richard Fung, Associate Professor in OCADU’s Integrated Media program, and Visiting Professor at the MCRC in 2009.

All are welcome and admission is free.

Art Creates Change: The Kym Pruesse Speaker Series will continue in 2011 with the following presentations:

Susan Buck-Morss
Thursday, February 3, 2011, 7 p.m.
Susan Buck-Morss is Professor of Political Philosophy and Social Theory in the Department of Government, and a member of the graduate fields of German Studies and History of Art at Cornell University. Her training is in Continental Theory, specifically, German Critical Philosophy and the Frankfurt School. She is currently researching and lecturing on politics and religion, theories of sovereignty, legitimacy and faith, and economies of political vision.

Wafaa Bilal
Thursday, February 10, 7 p.m.
The Chicago Tribune named Iraqi born Wafaa Bilal Artist of the Year in 2008 and called his dynamic installation, Domestic Tension, “one of the sharpest works of political art to be seen in a long time.” Through his varied art practices of installation, photography and performance, and utilizing the interactivity of the Internet, “re-skinned” video games, or body tattoos, Wafaa Bilal provokes and challenges audiences to consider the absences that result from war and contemporary violence. His works are incisive and chilling, conceptually driven, and at the same time playful and full of mourning. Wafaa Bilal is Assistant Professor of Art at New York University's Tisch School of the Arts.

All events are free and open to the public, and take place in OCADU’s Auditorium.

An artist, educator, writer and theorist, Kym Pruesse is celebrated as an expert in popular culture, art and design history, visual activism, art criticism and curatorial practice. A part of the OCADU community since 1994, Kym taught courses in media and cultural studies, contemporary theory, women in art, art criticism, popular culture and studio. She believed in a cross-disciplinary perspective and taught in both the Faculty of Art and the Faculty of Liberal Studies at OCADU. She passed away suddenly in June, 2009. The Art Creates Change series commemorates Kym’s work at OCADU, as well as her contribution to the Toronto art community.

The Kym Pruesse Memorial Scholarship is awarded to a student in excellent standing who shows a demonstrated interest in curatorial practice, art and design activism and/or popular culture. If you would like to make a donation in support of the scholarship, please contact Julie Frahar, Manager, Individual Giving & Alumni Relations, at 416.977.6000 Ext. 485. 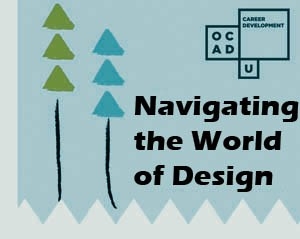 Join designer and OCAD U faculty member Zahra Ebrahim for an intimate conversation as we discuss the strategies which can enable a fulfilling, successful professional life.

A couple of old friends talk about art

Presented by the DRPT Thesis and Advanced Painting

OCAD U Community and invited guests

Dan Solomon is a painter and professor in the Drawing and Painting program at OCAD University. He worked full time at the David Mirvish Gallery from 1968 to 1970, and exhibited there in 1977 and 1978.

David Mirvish opened his gallery in 1963 and focused on exhibitions of Color Field artists. Since closing the gallery in 1978 he has worked primarily in the theatre and has continued to collect, building on the foundation of artists shown in the gallery. He is currently planning the creation of a museum to exhibit the collection in the Mirvish/Gehry project on King Street West. The project includes the Princess of Wales entre for Visual Arts at OCAD U.

David Mirvish and Dan Solomon have been friends since 1968; soon after, Dan moved to Toronto from Portland, Oregon.

Free - Limited to OCAD U students

The Canadian Radio-television Telecommunications Commission (CRTC) recently launched A Conversation with Canadians about the future of television in Canada. Join us for a frank, open, no holds barred conversation about what, where, when and on what platforms you choose for your television viewing.

Your views and opinions will help shape the Canadian television system in the next few years.

This conversation is being moderated by Rita Cugini, the former CRTC Commissioner for Ontario.

Refreshments will be served.

Please register your participation at letstalktv2013@gmail.com.