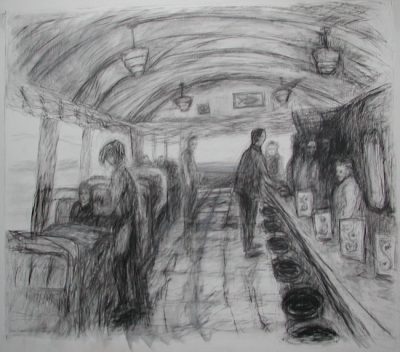 I'm looking at an anonymous daguerreotype from 1858 of a carefully composed picture of the city of Paris - except for that horse's head intruding from frame left.  In classical painting the use of composition normally eliminates such distractions by directing our gaze and how we read the image, without our knowing we're being led.  That is the “art” in visual art. Photography was different from the start, photographs at first being a rare magic. As with all novelty the unexpected was often awesome rather than quizzical, like this horse photobombing your landscape. Encroaching means the personal made public, which is what Rae Johnson does in her work by injecting what appears to be our personal remembrances into her paintings, her work hinting at secrets and hushed memories. The personal is unexpected and the impersonal is political.

At first glance these paintings don't seem unexpected, more like sophisticated drawing writ large. You wonder if Rae Johnson is just whipping that dead horse. Isn't beauty passé, so five minutes ago?  Duchamp did say good taste is the enemy of art so logically bad taste should be our friend.  Duchamp also said he wanted to kill art, discard the ocular, make it intellectual.  Art is senseless if lacking sensation, tasteless for lack of taste. But in the 1970s Abraham Moles and Frieder Nake analyzed links between beauty, information processing, and information theory. (1)  Physicist Paul Dirac is quoted saying “if one is working from the point of view of getting beauty in one's equations, and if one has really a sound insight, one is on a sure line of progress”.(2)  Denis Dutton was a philosophy professor and the editor of Arts & Letters Daily. In his book The Art Instinct, he suggested that humans are hard-wired to seek beauty. “There is evidence that perceptions of beauty are evolutionarily determined, that things, aspects of people and landscapes considered beautiful are typically found in situations likely to give enhanced survival of the perceiving human's genes.” (3)

In Against Interpretation, a collection of essays by Susan Sontag published in 1961, we’re informed that sensations and perceptions retain their primacy.  Sontag writes that we live "in a culture whose already classical dilemma is the hypertrophy of the intellect at the expense of energy and sensual capability…” (4)  that she called the revenge of the intellectual on the creative artist.  Thirty years later Robert Storr, then curator of MOMA, spoke of how, during the 1960s, art moved from the Cedar Tavern to the seminar room. Storr said it was a transformation that created a class of critics and artists, a class that lost all sight of the viewer and created a cult of difficulty based on jargon -– the words used like pieces in an erector set to reference their own theories to other theories, - with art works to illustrate those theories alongside.(5) Art shifted to the intellectual sphere because we find it so much more satisfying to struggle with something real, something we already understand, rather than face the unknown and create new understanding.  To stick with an intellectual approach is but procrastination, it is uninspired and therefore Johnson  plunges in, she paints.

In an interview discussing her work Johnson said, "we better get used to the fact that painting occupies a position all by itself, you can't get rid of it or deprecate it, it's unique." For 130 years we’ve heard of painting’s demise but currently we’re witnessing such a profusion of figurative painting including this exhibition as to put a “death of painting” argument back in the grave. Johnson has always turned the world into a narrative. She paints it like she’s drawing, in a handful of brush strokes. This current body of work includes powerful large paintings in colour but I'm fascinated with the monochromes. These are square black- and -white graphite on canvas, like large charcoal drawings, youthful sketches by a sophisticated painter.  Scenes of local bars, nightlife, dancing, with an itch of haunting memories.  The work promotes self-identification by mirroring our lives and the people we know, presented as chess pieces on a stage of memories.  Johnson tells us she smudges people’s features.  “I blurred when faces appeared, made them generic. So they will be more real to the viewer. If I gave them features it would detract”.  The impersonality of locale and the blurred figures are occasions for projection, for reading our own stories in the general pattern.  The impersonal is political.

Johnson’s recent paintings are like notations in a journal.… A memory of how going for a drink, waiting for a friend, at the Cameron or the Gladstone or your local oasis. Even as we think these are familiar clubs and bars Johnson said the sources are autonomous, pictures found on Google. Yet these images look both familiar and documentary, which tells us something about painting as a medium and Rae Johnson as artist. They always said Johnson had a Munchian vibe.  Rae’s paintings are not blatantly political.  They will not feed hungry Syrians nor do they berate Monsanto and capitalism, her images are neither didactic nor subscribe to overt social change. Yet these images are beautiful and haunting and certainly needed.  Long after conceptual works lose their train of thought the paintings will grow on you.  Rae Johnson’s canvasses are full of visual gestures and they are lovely, the brushstrokes embed a body language directed by the subconscious mind into a set of compressed codes. These brushstrokes aesthetics can be compared to algorithms that are decoded deep within the viewer while consciously we feel a sense of fascination. In the fine art aesthetic elements may be seen as compressed information we decode subliminally or on a semiconscious level. Aesthetics contain shades of meaning experienced as feelings and sensations, which have as much content as any intellectual statement.  Beauty is then a depth of complexity harmonized to simplicity… surely not something to ignore.

2- Paul Dirac, The Evolution of the Physicist's Picture of Nature (May 1963), Scientific

4- Susan Sontag, Against Interpretation and Other Essays, (New York: Farrar, Straus and

Get lost inside these drawings

Matthew Chapman is a fourth-year drawing and painting student at OCAD University.

Among Matthew’s creations is a murder mystery game inspired by the popular board game Clue.

“The Black Manor is a plan for an ultimate dollhouse murder mystery game. It’s based on the board game Clue, which I've been an immense fan of since childhood. This game, as you can see, is intended to have a multi-roomed mansion.”

There was a deleted chapter from Roald Dahl’s Charlie and the Chocolate Factory that was first published last year, and Matthew has illustrated a scene.

“There were extra children in the deleted chapter, including Miranda Mary Piker, a bratty teacher’s pet with a school headmaster as a father. I decided to illustrate in pen and Photoshop the cut chapter detailing Miranda and her father falling into the Spotty Powder Mixer; a machine that grinds powder to make children sick to evade exams. The Oompa Loompas' sing:

such a nasty, disobedient kid.

So we said, we shall fix her,

inside the Spotty Powder Mixer

and we'll like her even more than we did.

Matthew doesn’t just focus on ink drawings — check out the incredible detail in this Titanic image.

“This is an accurate cross section is of the RMS Titanic back when I did a theme exhibition on the ship in 2012. Made this entirely on SnagIt 8.0.” 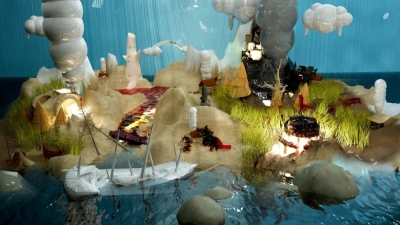 CBC’s new weekly series Exhibitionists launched this fall, examining creative and cultural events across the country. In the third episode, themed “Landscapes,” the work of OCAD U alumnus Alex McLeod (BFA, Drawing & Painting, 2007) is featured. Artists Kent Monkman and JR are also profiled in the 30-minute episode. An interview with McLeod alongside some of his images of fantastical landscapes can be found on the new CBC.ca/Arts website.

Painting upon the surfaces of everyday construction materials as well as directly upon the walls of the gallery itself, these two prominent visual artists and art educators explore the materiality of paint through an abstraction that takes as its starting point the built environment. Interests in light as contained and spilling forth; as material and immaterial within a space inform both artist's work. Investigations into the temporal and spatial characteristics we encounter within an architectural environment manifest in works that are at once complex and minimal. Come to the Latcham Gallery and experience these works that contain multiple perspectives simultaneously yet at the same time remain super flat.

Colette Laliberte is an artist and Associate Professor at the Ontario College of Art and Design University, Toronto (OCADU) where she teaches drawing, painting, installation and site-specific art interventions. Her work has been exhibited nationally and internationally. Exhibitions include Galeria de Arte Universal, Santiago de Cuba, Cuba (2007); Triangle Artists' Workshop 2004, Brooklyn, New York (2004); Durham Art Gallery, Durham, Ontario (2003); Musee des beaux-arts de Sherbrooke, Sherbrooke, Quebec (2003); ARCO Madrid, Spain (1996) among others. She is the recipient of visual grants from the Canada Council for the Arts, the Ontario Art Council and, Toronto Arts Council. Her work can be found in private collection in Canada, France and, Spain as well as in the public collection of Le Musee national des beaux-arts du Quebec, le Musee des beaux-arts de Sherbrooke and, the Canada Council for the Arts, Art Bank.

Nicholas Wade has taught at, Queen's University, Kingston, David Thompson University Centre in Nelson, Brock University in St. Catharines, Tyler School of Art in Philadelphia and The Nova Scotia College of Art in Halifax before moving to Lethbridge in 1994 where he taught from 1994 to 2011. In 2005 Wade installed his first permanent public art work entitled "the illumination" in the Millennium Library in the heart of Winnipeg. In that year he also was one of a number of Alberta Artists representing the province at Alberta Scene in Ottawa during Alberta's Centennial Year. In 2014 his work was represented in the Art Gallery of Alberta's 90th anniversary exhibition. Nicholas Wade has exhibited in most major Canadian Cities and has work in the Canada Council Art Bank, Nova Scotia Art Bank and in the collection of The Alberta Foundation for the Arts. He now splits his time
between Lethbridge AB and The Bruce Peninsula on Georgian Bay.

Please join Colette on Saturday March 7, between 1:00-3:00 pm at The Latchman Gallery, for a last chance to view the wall paintings she produced for the exhibition. 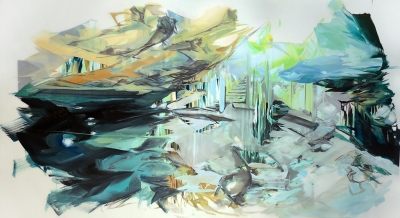 A new body of drawings and paintings by Linda Martinello.

This new work continues my research into the links between history and geography, and its political involvement with space, place and landscape. My focus is to expand the horizon between known territories of the real and our capacity to imagine other worlds, a further investigation into collecting fragments of history and reshaping identity.

Linda Martinello holds an MFA at the University of Waterloo, completed Advanced Visual Studies postgraduate program at OCAD University’s Off-Campus Florence Program in Italy and has an Honours BA at the University of Toronto. She is the recipient of several awards and research grants including Ontario Arts Council Grant, Toronto Arts Council Grant, SSHRC Joseph-Armand Bombardier Canada Graduate Scholarship, University of Waterloo President’s Graduate Scholarship, and the Shantz Fellowship Award. Martinello lives and works in Toronto.