Followed by a reception at Room 187

ERASING A COUNTRY: AN ON-GOING SERIES OF RESEARCH

Julius' work and research address eternal displacement through themes of colonialism, sexual identity, diasporic bodies, global identity construction, and the Eurocentric Western hegemony. It focuses on the hybrid nature of Filipino culture after colonialism and the gaze of queer identities as taxonomy. Hybrid images question the problematic side of queer communities that uphold homonormativity through whitewashing and internalized racism, which challenge forms of oppression.

Excavating their experience of immigration and assimilation through cultural erasure, their research looks at the narratives for many diasporic queer bodies that create an unattainable imagined space of lost countries and domestic belongings through colonial pedagogy of knowledge and globalized imperial power.

A migrant Filipino artist from the Ilocano Tribe descendant, with Spanish heritage and Native American ancestry of the Cherokee Indigenous tribe from the US. Julius is a descendant relative of Maria Josefa Gabriela Carino de Siang, known as an anti-colonial fighter during the 18th-century Spanish rule over the Philippines, the first female leader of a Filipino movement for independence from Spain.

Julius Poncelet Manapul received a Masters of Visual Studies from the University of Toronto (UofT), along with a certificate from the Collaborative Program in Sexual Diversity Studies, also from the UofT. His varying experience in project coordination andmanagement includes mentorship and facilitation for the Kapisanan Philippine Centre for Arts & Culture, coordination of both the Toronto-Berlin (1982-2012) exhibition and resulting publication, event planning, and organizing community collaboration projects.Manapul’s innovative research excavates the complexity of Philippinx colonizations and cultures, mapped with queer identity, through an interdisciplinary practice rooted in contemporary figuration. His work has been shown in exhibitions nationally andinternationally, including The Vortex (Austin, Texas), John B. Aird Gallery (Toronto), A Space Gallery (Toronto), University of Waterloo Gallery, Koffler (Toronto), and Butterbrot Projects (Berlin). Extensive bibliographies have been written about his work, including, Queering Urban Justice (U of T Press), Diasporic Intimacies: Queer Filipinosand Canadian Imaginaries (Northwestern University Press) and in the journal, Asian Diasporic Visual Cultures and the Americas (Brill).Manapul has taught art courses at OCAD University, the University of Toronto, and Cardinal  Newman High School. 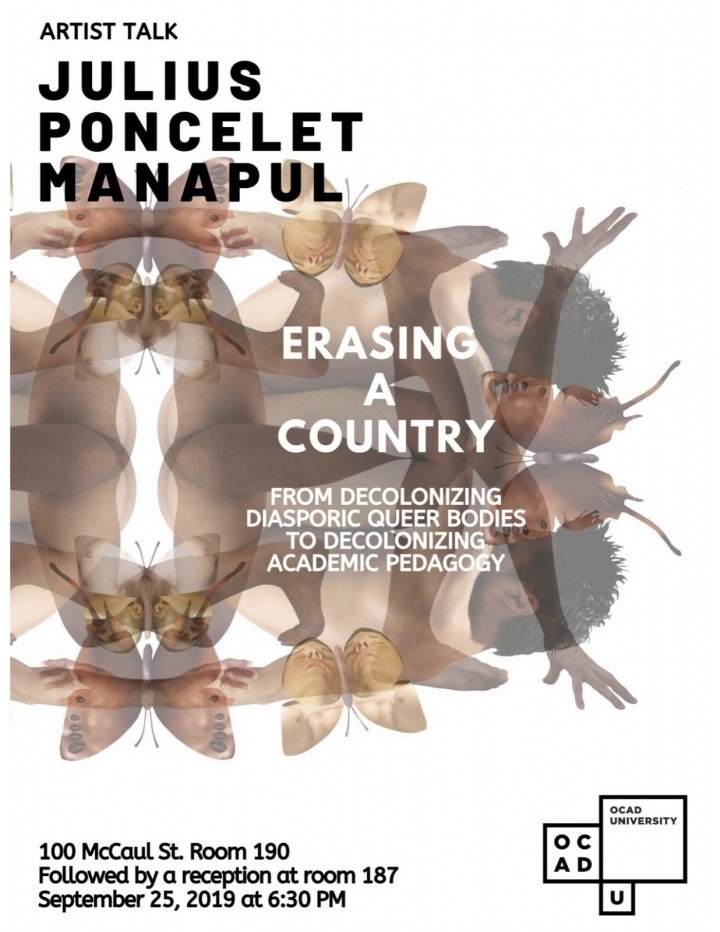