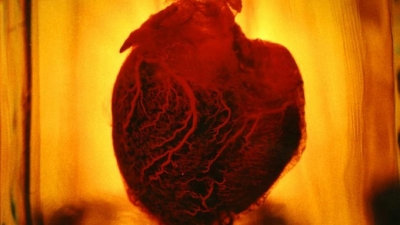 Among the hundreds of artists exhibiting throughout the streets for Nuit Blanche Toronto on October 1, 2016 from 7pm to 7am, are a collection of current and recent graduates of the Interdisciplinary Master’s in Art, Media and Design program.

Valerie Carew, Anna Kovler, and Garnet Willis (alumni) have work included in the Fly By Night exhibition at the Gladstone Hotel (1214 Queen St.). This exhibition “will showcase temporary installations with a particular focus on adaptive and ephemeral performance and installation.”

Current IAMD student Julian Majewski’s #TeeterTotter will be installed on the front lawn at Artscape Youngplace (180 Shaw St). Majewski’s “main interest in this project is how the #teetertotter encourages interaction while spreading a subtle yet powerful message towards celebrating DIY culture and aesthetic realization through recycling, repurposing, and scavenging.”

In addition, Michael Prokopow, Interim Dean, Graduate Studies is co-curator alongside Janine Marchessault of OBLIVION, one of the four city-produced exhibitions. Located in Nathan Phillips Square and City Hall there are three featured projects by Philip Beesley, Director X, and Floria Sigismondi (also an OCAD U alumni).

For more on Nuit Blanche Toronto @ OCAD U: http://www2.ocadu.ca/event/16321/nuit-blanche-toronto-at-ocad-university

For more on the IAMD program: http://www.ocadu.ca/academics/graduate-studies/interdisciplinary-masters-in-art-media-and-design.htm

Other Worlds on display at Lieutenant Governor’s suite 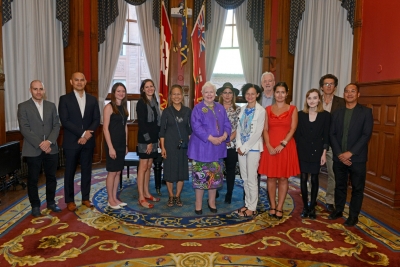 An exhibition of works by OCAD University faculty and recent graduates has opened at Queen’s Park. Other Worlds includes media froom photographs and paintings to sculpture and fibre art. It features the work of 19 artists:

“The placement of this exhibition of contemporary artworks within the Lieutenant Governor’s suite at Queen’s Park embodies a rare and unusual meeting between these two worlds. Highly experimental contemporary works brush up against an important ceremonial location of historical significance.”

Members of the public are able to view the exhibition in person on selected days (Monday to Friday) during tours of the Legislative Building at Queen’s Park. To enquire about visiting, please call the Parliamentary Protocol and Public Relations Branch at 416-325-0061 or visit the website of the Legislative Assembly of Ontario.

Ilene Sova, Faculty of Art, will be on the jury as an artist for the Samara Everyday Political Citizen Award 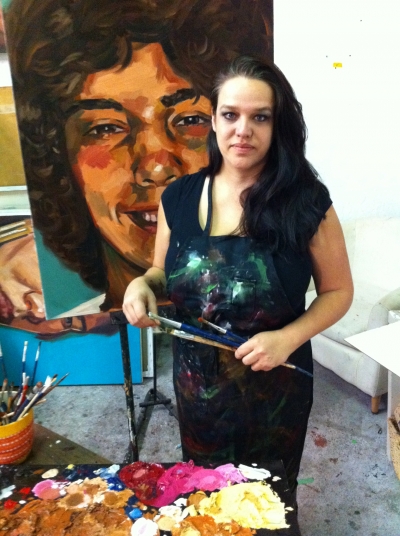 Ilene Sova, Artist and Educator/Faculty of Art OCAD University, will be on the jury as an artist for the Samara Everyday Political Citizen Award.  The jury includes Margaret Atwood and Ricker Mercer.  "Everyday Political Citizen is an annual contest that profiles ordinary people working to strengthen their communities. In a year where many around the world are questioning the merits of democracy, we celebrate Canada’s strength: the advocates, educators, organizers, and politicos whose tireless dedication strengthens our democracy."

Ilene Sova:  "While researching for the Missing Women Project, I poured over newspapers, for personality details like, “she loved to write poetry” or “her laugh was contagious”. I would meditate on these insights while I painted. Through the research, it became painfully clear that violence and lack of action were based on outdated notions of “good women’ and “bad women." At that realization, I made a commitment to use the artwork as a vehicle to provoke discussion about gendered violence and to build a network around art and social justice issues that could enact change. Through my projects, I wish to move people with art towards new gender paradigms are healthy and help to heal our communities."

Sessional Instructor, James Maxwell is an artist who works primarily in metal.

"This show presents a body of work that attempts to mediate the confrontation between object and representation. Objects flattened, and drawings expanded, as governed by the application of systems, are executed in steel and corrugated cardboard. I employ systems as a way to lose my self during the creative process in order to allow another self to surface and work unimpeded" - James Maxwell 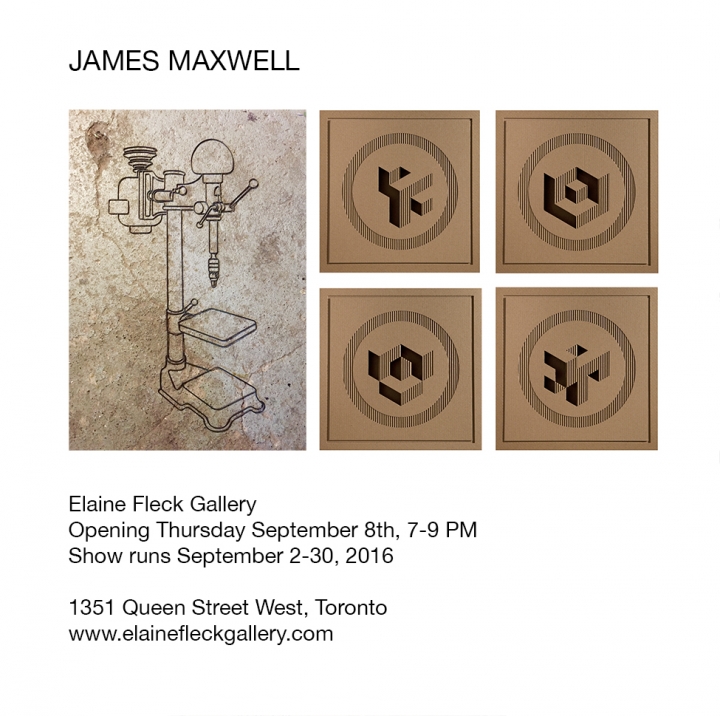 All faculty are welcome to attend these events, which will be held in 100 McCaul St. No registration is required. Please see website for location information.

9:00am-9:40am Welcome Address from the President

4:00pm-5:30pm Welcome Back Social: Remarks from the President and Vice-President, Academic and Provost

Creative Quarterly Journal is a publication that features some of the best work in art, photography, design and artists in all media from all countries.

For the Winter 2016 Edition (Creative Quarterly 45) the work of OCAD U Illustration's Sessional Instructor Doug Panton has been awarded winner in the categoy of Fine Art: Professional and the work of OCAD U Graphic Design's Sessional Instructor Anson Liaw has been selected as Runner-Up in the category of Illustration: Professional.

The complete list of winners can be found here.

Join the O-TEAM! Volunteer for O-DAYS!

Positions open to students, staff/faculty and alumni.
To sign up, please visit www.ocadu.ca/oteam 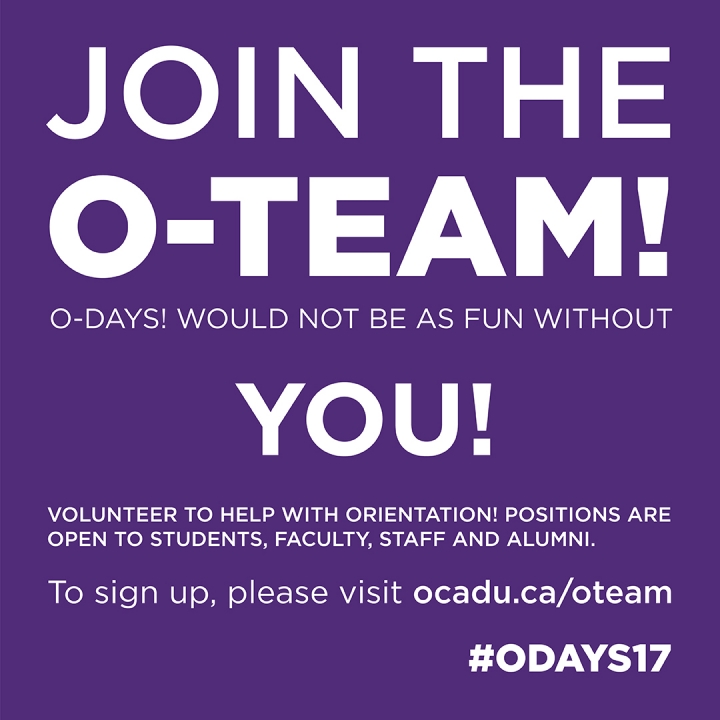 Coffee and light snacks will be provided.

Please invite your colleagues and join us for this exciting opportunity to hear about Professor Kara’s research. See the poster attached for more details.

In this talk, Selmin Kara will provide a brief overview of her research on the emerging aesthetic and thematic threads related to the Anthropocene imaginary in contemporary cinema, with special attention to films that project the impact of ecological exploitation onto human bodies. In films like Todd Haynes’s Safe (1995), Kelly Reichardt’s Night Moves (2013), Shane Carruth’s Upstream Colour (2013), and Elinor Svoboda’s Merus Breach (2013), one finds characters that suffer from an eco-sensory breach that compromises their immune system and makes them oversensitive to certain stimuli such as pathogens, sounds, odours, or touch, due to environmental factors. Depictions of immune system collapse immediately configures the impact of the Anthropocene on the body as a metabolic rift: a tearing apart of the body’s resources and preventing the body from defending itself.  According to immune theory (under the guise of a wide array of philosophers, ranging from Niels Bohr and Fransisco Varela to Donna Haraway), the immune system is closely linked to the formation of identity, since it is predicated upon a distinction between self-and nonself, self and the environment. Varela even goes as far as suggesting that the immune system is one of the constituents of the notion of “self,” since it is a closed network that self-determines the body’s stability and capacities of interaction with its environment. From a cinematic point of view, the four films’ foregrounding of the senses in depicting narratives of bodily vulnerability entangle humans in a sensual ecology, which create an aesthetic that unsettles and resists anthropocentric imaginings. Taking the tension between these films’ narratives of eco-sensory breach and eco-sensuous aesthetic, the talk will explore what they might suggest in terms of transcorporeality and affect in the Anthropocene. 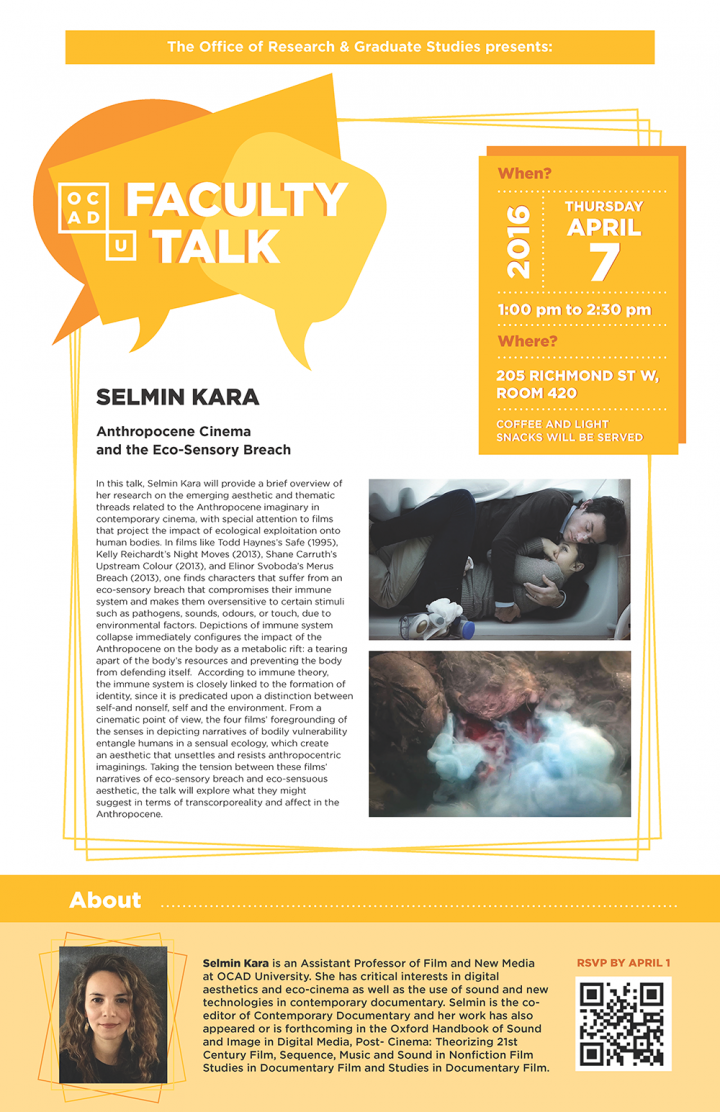