The OCAD U Christian Fellowship invites you to bring Taco stuffings and friends and partake in Taco Night!

ABOUT OCAD U CHRISTIAN FELLOWSHIP:
Affiliated with InterVarsity Christian Fellowship, the OCF cultivates spiritual growth and fosters community through prayer meetings, community meals, and art discussion groups. An affiliation with the Inter-Varsity Christian Fellowship of Canada allows members to participate in events such as retreats, seminars and conferences. Christian and non-Christian students, faculty and staff interested in participating amongst an OCAD U community of believers are welcome.

FIND OUT MORE ABOUT THIS STUDENT GROUP AND OTHERS: www.ocadu.ca/studentgroups 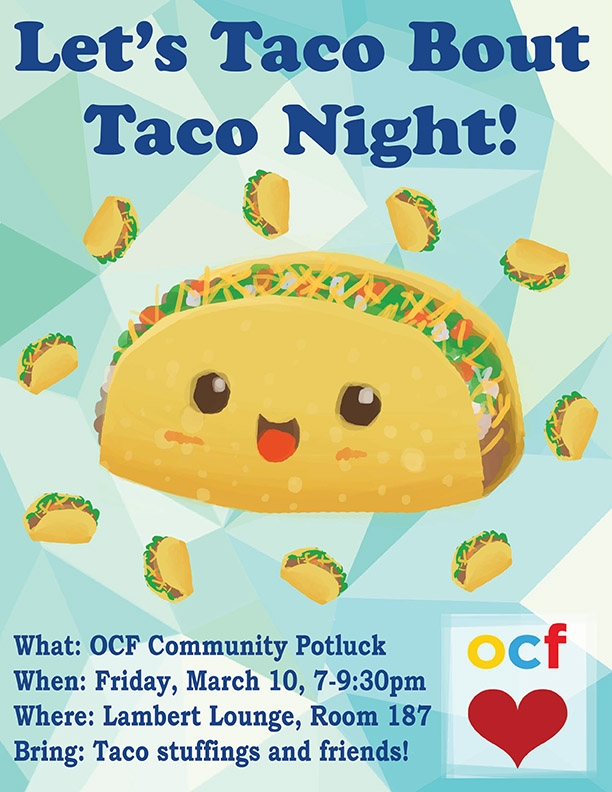 OCAD U Writing in the Disciplines Fellows announced

A university-wide Writing Across the Curriculum (WAC) Initiative was launched this year at OCAD U following a year-long needs assessment and consultation process aimed at developing a comprehensive strategy to improve student writing outcomes. The initiative, which was approved by Senate in May 2013, facilitates the integration of writing throughout all undergraduate programs at OCAD U to support student academic success and foster a writing culture at the university that values and enriches the studio and professional practice of both students and faculty.

The role of the Fellows is to guide WAC implementation, inform resource and curriculum development to integrate writing into disciplinary contexts and build support for the WAC initiative within their Faculties. In addition to doing Faculty-specific work, they are excited about the cross-Faculty engagement that the initiative is fostering.

“Teaching critical and creative writing in this academic context, I constantly see the natural connections between writing practice and the work students do in studio,” said Black. “I’m very enthusiastic about nurturing the development of a writing culture at OCAD U, and I feel this is an opportunity to reinforce for our students the value of writing in an art and design education.”

“Writing, which is an integral part of a professional studio practice, can be intimidating for visual thinkers and makers,” said Collins. “Journaling, note-taking, reading responses, titles, statements, proposals, CV and website maintenance, press releases, curatorial essays, reviews of other artists work: ALL of these contribute to the development and dissemination of my visual art practice. I want my students to have the same fluency and ability to communicate in as many ways as possible.”

“I am excited to represent the Design faculty in this initiative,” said van Kampen. “For me writing is a way to bridge the gap between theory and practice. Writing becomes a means for research that informs what I make. I hope to instill this practice in my students in order to help them articulate their intent and give words to their practice.”

In a recent message sent to their respective Faculties, the Fellows noted the Writing & Learning Centre’s work in preparing an instructors’ toolkit to share writing ideas and experiences, and asked their colleagues to consider the many ways of incorporating low- and no-stakes writing activities into courses. Some examples include freewriting, creative responses, reflection exercises, descriptive writing, research, brainstorming, lists, and generative wordplay.

The OCAD University community is saddened by the passing of Canadian craft advocate and OCAD U Honorary Fellow Jean Johnson, CM, who passed away on May 27 at the age of 90. Her professional and volunteer career spanned 65 years.

Johnson’s interest in the arts was rooted in her childhood. She graduated from the art program at Northern Secondary School at the age of 18, and had her first “art job” re-drawing the American comic-book superhero Captain Marvel for Canadian audiences. She lived in Venezuela from 1951 to 1961; during her time there, in addition to learning Spanish, she painted the landscape and drew botanical images.

Johnson returned to Toronto in 1961 and became curator at Merton Gallery. While there, she represented and supported the careers of several notable Canadian craftspeople; among them OCAD U alumni Kai Chan (AOCA, Interior Design,1970), David H. Kaye (AOCA, Textiles, 1972), Viktor Tinkl (AOCA, Fine Arts, 1959) and Joanna Staniszkis. When she left Merton Gallery in 1971, she was hired by the OCAD University (then known as the Ontario College of Art) to manage a retail shop, and prepare studies and reports for fundraising campaigns.

In 1979, she began what she later called “the crowning achievement” of her career, running Harbourfront’s Craft Studio. Johnson saw rich potential in the Craft Studio’s artist-in-residence program and was the driving force behind its development into a prime destination for young Canadian craftspeople. She introduced a resource library and a volunteer advisory committee to the site, as well as encouraging international exchanges and inviting leading figures to lecture and give master classes.

In 1991, Johnson became Craft Projects Manager at Harbourfront Centre. She presented a conference, Exploring Contemporary Craft History, Theory and Critical Writing, bringing curators, critics and craftspeople together and produced a book by the same name with Coach House Books. She ended her career at Harbourfront as Manager of Special Craft Initiatives. In that role, she produced the Crafting New Traditions: Canadian Innovators and Influences symposium and publication, which celebrates Canadian craft pioneers.

Johnson also contributed to the arts as a volunteer. In 1975, as a member of the Steering Committee for International Women’s Year, Johnson helped facilitate Women and the Arts, an exhibition at the Art Gallery of Harbourfront. She volunteered for the Association of Registered Interior Designers of Ontario (ARIDO) from 1975-1979, coordinating the production and installation of commissions in hospitals and city halls. She was deeply involved with the Canadian Society for the Decorative Arts since its creation 30 years ago. Later in her career, she served as President of the William Morris Society of Canada.

Johnson was a passionate supporter of Craft Ontario, loyally attending our exhibition openings and fundraising events, serving on numerous committees and as a board member from 1982 to 1983. She was a well-respected and sought after juror and board member. “I rarely say no to an experience, a job, or project, and have never worried too much about salary, the cafeteria or other amenities,” said Johnson in a 2008 interview about her career. “My participation is based on the potential to make something exciting, new and important happen.”

Recognized with many awards and honours, Johnson received was inducted as a Member of the Order of Canada in 1993, and received an honorary doctorate from NSCAD University in 1999. In 2000, she was named as an OCAD University Honorary Fellow.

Donations in Johnson’s memory can be made to Craft Ontario via the online donation platform, over the phone by calling 416-925-4222 x227 or via cheque made out to Craft Ontario, noting "In Memory of Jean Johnson" in the memo line.  Please mail cheques to Craft Ontario, 990 Queen St. W., Toronto, ON, M6J 1H1.

Edited and republished with permission from Craft Ontario. Information taken from the article "The Undeniable Grande Dame of Craft" written by Melanie Egan for the Spring/Summer 2008 edition of Studio Magazine.