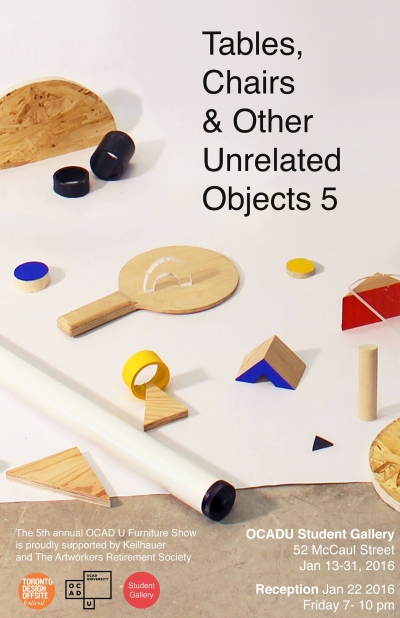 For those of us who make furniture it is not always the object alone, that we pursue. As students within the furniture program at OCAD University, we are encouraged to explore and develop our thinking around the role of furniture -- as a medium for personal expression, as a reflection of social and cultural norms, and as an influence upon human behaviour. This exhibition presents a brief glimpse into to that discussion.

We’re thrilled to be presenting this exhibition as a part of Toronto Design Offsite:
http://todesignoffsite.com/event/tables-chairs-other-unrelated-objects-5-2/ 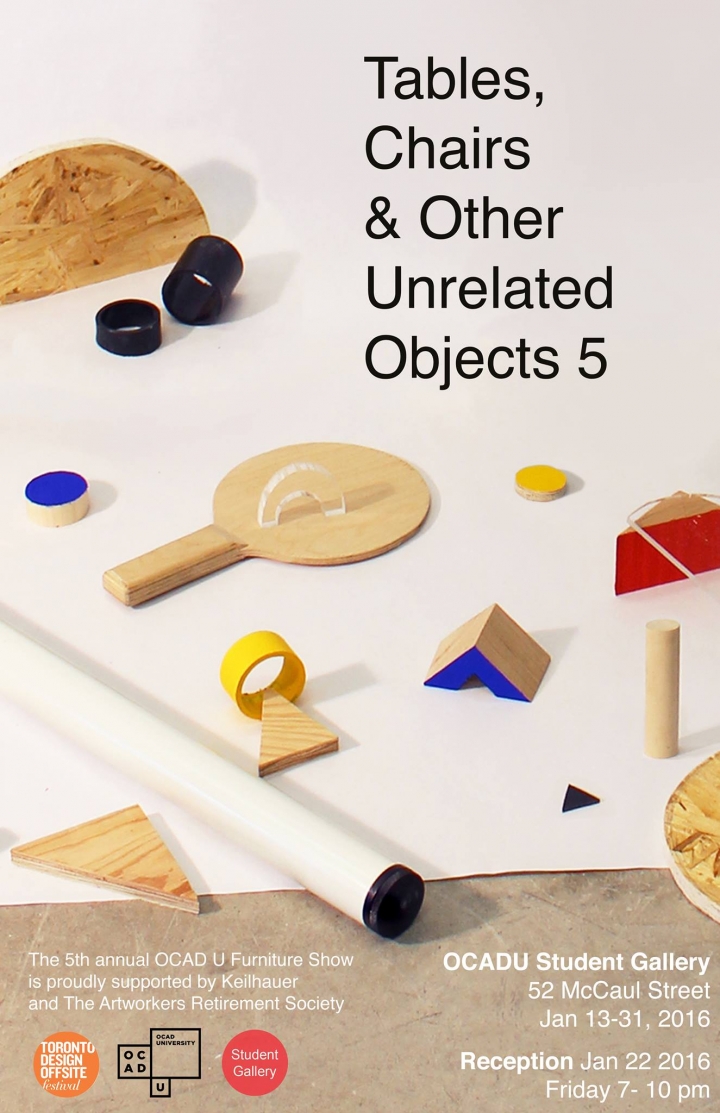 Beverly has extensive international experience working with cultural institutions such as art galleries and museums. Her company Design in Three Dimensions has provided experience and exhibit design, as well as strategic planning work for museums in Canada, the United States, and Hong Kong.

Katrina Tompkins specializes in custom furniture design and fabrication for residential and commercial use. She maintains her studio, Tinsel & Sawdust, in Toronto where she collaborates with various artists and designers to create installations, one-off commissions and designed interiors. Katrina was featured in 'Junk Raiders' (The Discovery Channel) for her work with sustainable and repurposed materials.

For those who make furniture it is not always the object alone that is pursued.

Students of OCAD University are encouraged to explore and develop their thinking around the role of furniture as a medium for personal expression, as a reflection of social and cultural norms, and as an influence upon human behavior.

Presented by the OCAD U Student Gallery, this exhibition showcases furniture for much more than its aesthetic and functional existence, but for the messages it can convey.

Now in its sixth year, ‘Tables, Chairs & Other Unrelated Objects’ is exhibiting as part of ‘Come Up To My Room’ (CUTMR) at the Gladstone Hotel, curated by recent graduate Alisa Maria Wronski.

Special thanks to Monarch Custom Ply, Eventscape, Keilhauer and the Artworkers Retirement Society for their generous support.

More info & hours on “Come Up to My Room” event: http://todesignoffsite.com/event/come-up-to-my-room-2017/

We’re thrilled to be presenting this exhibition as a part of Toronto Design Offsite: 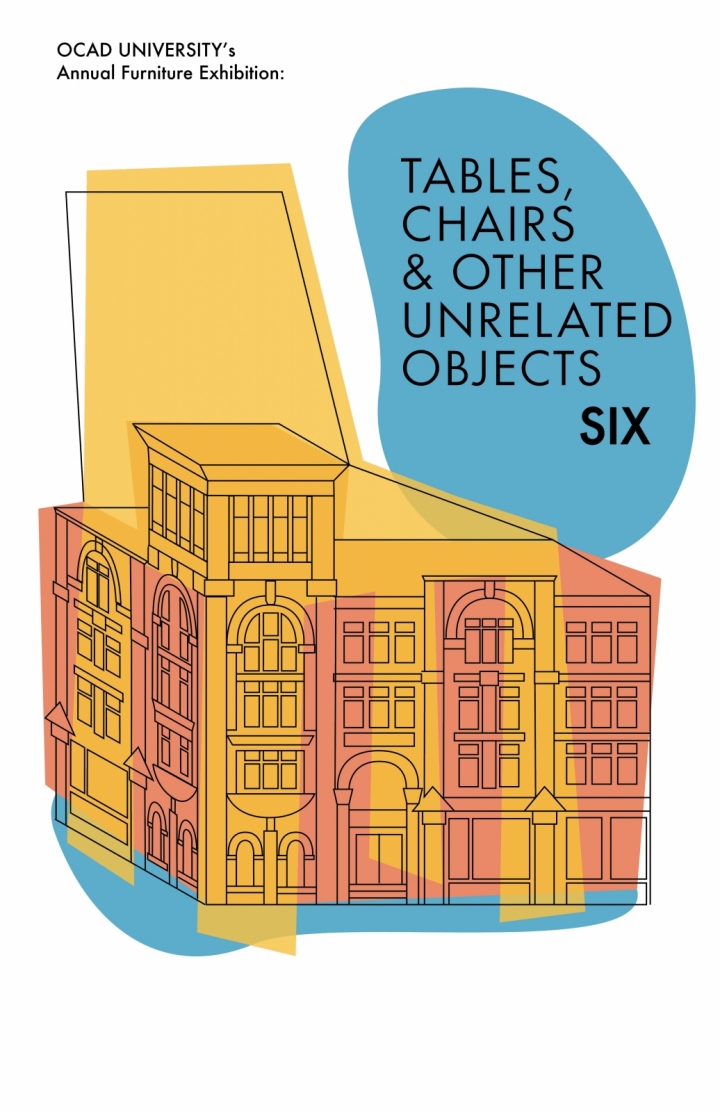 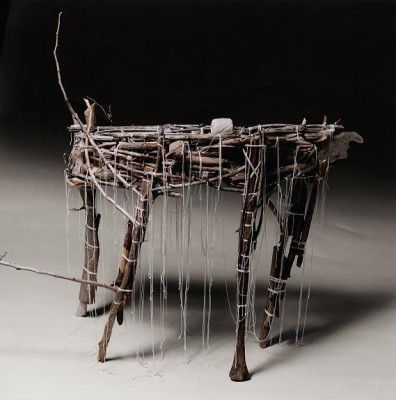 Adjectives not normally used when describing furniture. But these are exactly the words one could use to describe the works of Canadian furniture maker, Gord Peteran, Professor at OCAD, whose works are on view at the Long Beach Museum of Art from April 11 through September 7, 2008.

Gord Peteran: Furniture Meets Its Maker, is a thoughtprovoking exhibition of 34 psychologically compelling pieces of, you guessed it, furniture.

It is furniture unlike any other. A table that doesn't hold objects, chairs not made for sitting, objects that appear to function as torture devices or for the sexually experimental. Despite the dubious functionality of many of the pieces in the exhibition, one can recognize, using Peteran’s word, the “furnitural” quality of the object. The accompanying exhibition catalog expresses it this way, “at Peteran’s
hands furniture dies a fascinating death, without ever quite going away.”

Death is a common, if subtle, undercurrent in many of his works. 100 is a pair of precisely machined tables, one of which disassembles into a carrying case like that used for a rifle. Ark has the qualities of both a confessional booth and an electric
chair. Untitled So Far appears as a shrouded or mummified corpse.
As if to balance the seriousness that permeates so much of his work, other pieces display an disarming sense of playfulness or whimsy, like A Little Table, a single joint that is, as Peteran puts it, “just approaching” being a table, or Musical Box (Glen
Gould Prize) a contraption that according to Peteran, “makes seven stupid sounds, all different.”

In all cases, Peteran's work pays homage to the traditional role of furniture while at the same time standing it on its head. 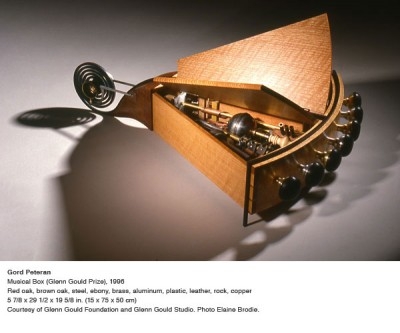 One of the most innovative artists working in North America today happens to be a woodworker. Toronto's Gord Peteran has launched a boundary-crossing career, opening up the category of furniture to an unprecedented range of psychological and conceptual content. Sometimes his means are disarmingly simple: his work 'A Table Made of Wood' is cobbled together, seemingly at random, from scraps lying on his workshop floor. At other times, he employs craftsmanship of the highest order, as in '100', a precisely machined occasional table that disassembles into a carrying case like that used for a rifle. Other works suggest specimen cabinets, seesaws and game tables, all twisted into new relevance through subtle manipulation. In all cases, Peteran's work addresses the specific conditions of furniture even as it subverts those conditions.

Gord Peteran: Furniture Meets its Maker is organized by the Milwaukee Art Museum and the Chipstone Foundation with generous support from the Windgate Charitable Foundation. It includes a national tour and is guest curated by Glenn Adamson, head of Graduate Studies, Victoria and Albert Museum. 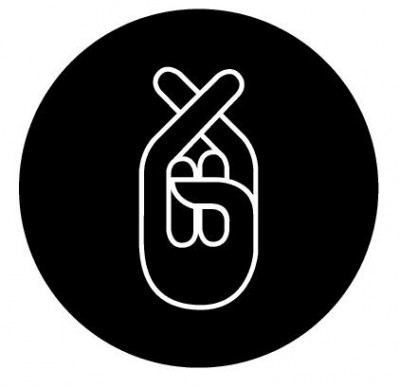 FEATURING: Andrea Chin, Andrew Morton, Amrita Takhar, Gina Yu, Joel Pollock, Grace Park, Erin McCutcheon, Marijan Zelic, Mike Kicul and Willie Tsang.
Artist, designer and educator Gord Peteran gives ten emerging designers the same brief: Go find a chair on the street, analyze the reasons behind its disposal and reconstruct the chair in any way desired'the outcome does necessarily need to be a chair. Through this restoration both history and newfound potential within the chair are exposed. Using this reconstruction as source material the designers make new chairs to highlight the discarded chairs strongest points.
Found and Crafted showcases the result of this innovative design
initiative: each new chair is displayed along side a photo of the discarded, restored chair.
The designers featured in this exhibition are students in their final year of the Ontario College of Art and Design 's prestigious Industrial Design program. This program investigates customer and commercial projects, furniture, interaction and experience design, strategic creativity and applied innovation. Engaging in extensive research and analysis, these emerging designers develop new products and experiences while addressing current and emerging human needs.
The work featured in Found and Crafted exemplifies innovative and rigorous design practice. Walking the blurry line between art and design, Found and Crafted examines the cyclical nature of objects, creating a discourse around what a chair as furniture is, and what it can be through investigation and manipulation. 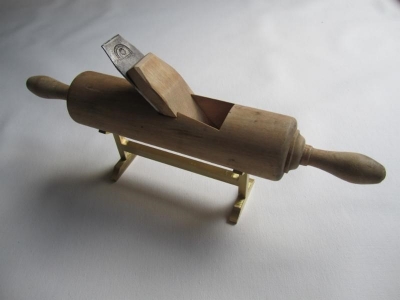 OCAD U Graduate Gord Peteran is an artist that operates on, in, or often near the territory of furniture.

His work will be presented in the exhibit "re-assembled history" at the Agnes Jamieson Gallery from August 9 to October 1, with an opening reception and artist talk on August 13 from 1 PM to 3 PM.

"I suspect that our built environment is patterned after the subconscious. My work relies on excavating some of these "symptoms of life" from the kinds of space and objects we place between us and our architecture. The intimate domain of the home is a fertile landscape to draw from when assembling my ideas.  Furniture is often my subject, due to its close proximity to the body.

Not being a fan of "new" I target the very old vices and virtues we harbour.

This exhibition will dig into the historically familiar, . . .to produce even more familiar things, sometimes difficult things we've seen many times but refuse to recognized.

Through a combination of overt re-pairs or subtle re-inventions my goal is to coax them back into the present visible."