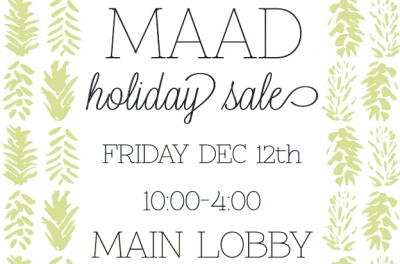 The Material Art & Design program presents a selection of handmade gifts perfect for your loved ones! A portion of the funds raised goes towards the MAAS thesis show!

Passages: First Peoples at OCAD is presented in On Site at OCAD, and showcases the work of OCAD’s Indigenous alumni, faculty, students and staff. An opening ceremony and reception will take place in the Great Hall on National Aboriginal Day, Monday, June 21, from 7:30 to 9:30 p.m. The exhibition continues until July 2.

On June 22 from 2 to 4:30 p.m., Portage: A symposium on Aboriginal Visual Culture offers guests an opportunity to hear the first-hand accounts of artists and scholars who contributed to the reawakening of Aboriginal people and their culture in Canada. Portage speakers’ stories extend from the 1960s to the present and recount, from their unique perspectives, the key events in recent Aboriginal history — events that contributed to the emergence of a vibrant Aboriginal presence in the contemporary cultural scene. Speakers are Duke Redbird, poet, artist, actor, educator; Robert Houle, artist, curator, writer, educator; and Susan Dion, writer, educator. Portage takes place in the OCAD University Auditorium.

The exhibition Endaian (or “home” in Ojibwa) runs from June 19 to September 6, with an opening reception on Tuesday, June 22 from 7:30 to 9:30 p.m. The exhibit includes work by OCAD Aboriginal students Violet Chum, Erika A. Iserhoff, Meryl McMaster, Antoine Mountain and Lisa Myers, all of whom are responding to the work of the Group of Seven.

Duke Redbird, poet, broadcaster, artist
During the sixties and seventies Duke Redbird was in the forefront of Aboriginal political organizations and was a prominent public speaker on Native issues, providing First Nations people in Canada with new, young and aggressive leadership. He was president of the Ontario Métis and Non-status Indian Association and director of their land claims research, as well as vice-president of the Native Council of Canada. A prominent broadcaster and poet, Duke has appeared in numerous film and video productions and spoken on Native issues both nationally and internationally. Duke Redbird received his M.A. in interdisciplinary studies at York University, Toronto in 1978. He currently serves as mentor/advisor in the Aboriginal Visual Culture Program at OCAD University.

Robert Houle, artist, curator, writer, educator
Robert Houle has exhibited his work internationally since the 1970s, at the Museum of Contemporary Art (Sydney), the Canadian Cultural Centre (Paris), the Stedelijk Museum (Amsterdam), and many others. In Canada, he has shown work at the National Gallery, the Art Gallery of Ontario, the Winnipeg Art Gallery, the Museum of Contemporary Canadian Art, Carleton University Art Gallery, and many more. His work is included in most major Canadian collections. Houle was the first Aboriginal curator of Indian Art at the National Museum of Man (now the Museum of Civilization) in Ottawa from 1977 to 1980 and co-curated the landmark exhibition Land, Spirit, Power at the National Gallery of Canada in 1992. Houle was the first Aboriginal faculty member at OCAD University, a position he held for fifteen years until 2005.

Susan Dion, scholar, educator
Susan Dion is an Aboriginal scholar who has been working in the field of education for 25 years. Her teaching and research focuses on understanding the relationship between Aboriginal and non-Aboriginal people in Canada. Dion’s research interests include the social and political contexts of education; disrupting memories of post-invasion First Nations - Canadian Relations; resistance strategies of Aboriginal adolescent girls; Aboriginal Women and the policy of forced assimilation and violence prevention in Aboriginal communities. Dion’s recently published book Braiding Histories: Learning from Aboriginal Peoples' Experiences and Perspectives proposes a new pedagogy for addressing Aboriginal subject material, shifting the focus from an essentializing or "othering" exploration of the attributes of Aboriginal peoples to a focus on historical experiences that inform our understanding of contemporary relationships between Aboriginal and non-Aboriginal peoples. Dr. Dion is a professor in the Faculty of Education at York University.

About OCAD University (OCADU)
OCAD University (www.ocad.ca) is Canada’s “University of the Imagination.” The University is dedicated to art and design education, practice and research and to knowledge and invention across a wide range of disciplines. OCAD University is building on its traditional, studio-based strengths, adding new approaches to learning that champion cross-disciplinary practice, collaboration and the integration of emerging technologies. In the Age of Imagination, OCAD University community members will be uniquely qualified to act as catalysts for the next advances in culture, technology and quality of life for all Canadians. 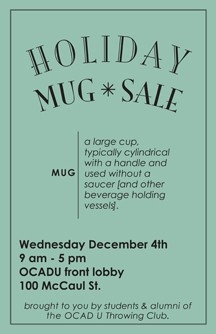 Unique handcrafted ceramic wares for sale as a fundraiser for Throwing Club.

ABOUT THROWING CLUB:
Want to learn how to make ceramic pots on a wheel? This is your chance! Throwing Club will be doing weekly sessions where we teach anyone with Ceramic studio access how to throw—just because we think throwing is fabulous and everyone should give it a try! Students from all departments welcome. 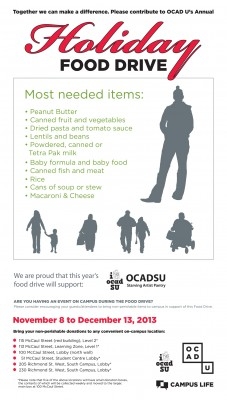 If you can, please contribute and help us fill a box in support of our students in need!

(*Please note that five of the above locations will have small donation boxes, the contents of which will be collected weekly and moved to the larger, main box at 100 McCaul Street.

ARE YOU HAVING AN EVENT ON CAMPUS DURING THE FOOD DRIVE? Please consider encouraging your guests/attendees to bring non-perishable items to campus in support of this Food Drive!