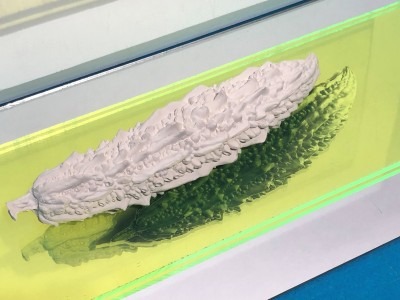 In a 1965 radio interview, Belgian Surrealist René Magritte provided the following, somewhat abstruse, description of his decision to paint a bright green apple over the face of his now iconic self-portrait The Son of Man:

This tension between what is hidden and what is revealed was a key element in the work of the original Surrealists and continues to motivate the artists featured in Everything we see hides another thing. The works combine material play, abstraction and an oscillation between control and chance with a strong sense of the personal. They use gesture, in all its forms, as a tool for experimentation. They fetishize the things that hide, are hidden and hold. They take what they see and reconfigure it, drawing attention to the physical and psychic consequences of the everyday and contributing to the sovereignty of questions over answers.

The exhibition continues until March 9. 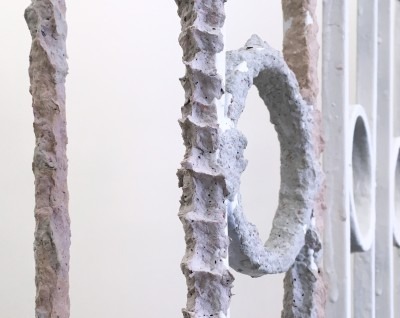 Kotama Bouabane: We'll Get There Fast and then We'll Take It Slow 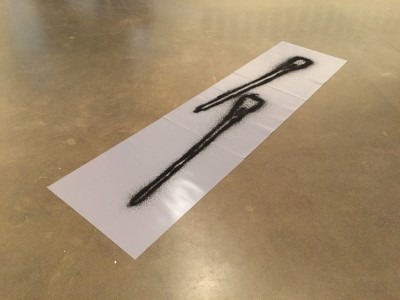 Opening reception on Friday, February 23 at 8PM. Admission is free and all are welcome.

We’ll get there fast and then we’ll take it slow examines the relationship between object and image through an experimental ethnographic approach. Taking its title from the Beach Boys 1988 song “Kokomo”, which describes a lush fictional island off of the Florida Keys, the exhibition similarly explores the construction of tropical non-places – ones that exist only in the North American middle-class imaginary – through numerous familiar tropes in travel photography. Just as Kokomo becomes a stand in for all island locals, images featuring palm trees, coconuts or dewy cocktails conjure ideas of exotic escapes, leisure and luxury. The accumulation of coconut imagery destabilizes an easy or unified reading of the coconut as symbol. The coconut appears again, humorously out of context mounted to the end of a selfie stick as Bouabane poses with tourists at a lookout on a mountain hike in Banff. The wide-open and pristine mountain expanse captured in the background of these images is often used to depict Canada in postcards and travel brochures, and potently portrays the landscape as a sight for leisure. The absurdity of recreating the familiar gesture with the coconut camera underscores the seemingly bottomless human desire to document and locate ourselves in relation to place, and foregrounds the complacent roll of photography in fostering economies of leisure and travel.
-Leila Timmins

The most common injury in Banff National Park is caused by tourists feeding ground squirrels and subsequently requiring stitches from bites sustained to their fingers—one of the many bad tourist behaviours witnessed in the Rocky Mountains. Banff is a place so beautiful it seems fictitious ; elk crossing residential streets and fuschia sunrises over mountain peaks. Its landscapes are reduced to postcard images, simplifying the town as an idyllic community. Banff acts as an intersection between desire, fantasy and reality; although its reality is a parallel with conflicting versions of nature, frontierism, nation-building and conservation. Within this confluence of Banff, Toronto-based artist Kotama Bouabane undertook the making of this body of work for the exhibition We’ll get there fast and then we’ll take it slow— although, examining these same issues toward other fictitious elsewheres.

The exhibition takes its impetus from an instructive image on colour correction from a 1970s Kodak manual; the artist questioned the positioning of coconuts deliciously cracked opened, ready to be consumed and its inclusion in a mundane technical manual. The dramatization of the photo, exemplifies photography’s historic complacency with its subject. Bouabane, used this as a starting point to further investigate stereotypes of Western ideals and ideologies of island life and leisure. The materials used in the exhibition—coconuts, tiki torches and bamboo—embody notions of escapism and commodification of culture, that perhaps symbolize a supposed better elsewhere, however fraught with a colonial gaze.

In the work, the coconuts are transformed from the subject of the photographs to becoming the photographic tools themselves. First, the coconuts are positioned into a series of photograms with anthropomorphized bewildered expressions in Faces #1-#50 (2015). The coconuts are also made into pinhole cameras, their guestural landscapes are shown in the Mountains series. Through a sense of play and humour, Bouabane manipulates and exhausts the materials, investigating the idealizations imposed on them. Further, the coconuts become new objects; the mural in the back of the space shows the artist at the summit of Sulphur Mountain in Banff, Bouabane, poses with his futile coconut selfie-stick, amongst the other tourists, and against the “awe-inspiring” backdrop of the Rocky Mountains. The artist humorously performs the tourist, further exploring these notions of commodification of place and material.

In Prop Down (2017), the artist examines the tiki torch’s contrived history and the unfixed nature of how images linger or as a potential residue of memory, through the gestural imprint of the tiki torch on the paper. The slippage of meaning, object and symbolism comes together in this work. Questioning ideas of representation, versus what is actually represented.

The title of the exhibition, We’ll get there fast and then we’ll take it slow adopts its name from a lyric in The Beach Boys 1988 hit Kokomo , describing an exotic but fictitious island off the coast of the Florida Keys. This glorification of a place, has a likeness to that of Banff, with the dichotomy of idealization and reality. However, in Banff it’s at the very moment the ground squirrel bites the tourist, that these illusions are shattered and unmasked .

Katarina Veljovic is an arts worker and occasional curator based in Toronto. She is a candidate for the MA Art History and Curatorial Studies degree at York University.

Kotama Bouabane has an MFA in Studio Arts, Photography from Concordia University, Montreal and an AOCAD from OCAD. His work has been exhibited in many galleries including Centre A (Vancouver), VU Photo (Quebec City) & Gallery 44 Centre For Contemporary Photography (Toronto). He has received many awards and grants from the Toronto Arts Council, Ontario Arts Council & the Canada Council for the Arts. He currently holds positions in the Photography Department at OCADU and York University.

Kotama Bouabane: We'll Get There Fast and Then We'll Take It Slow 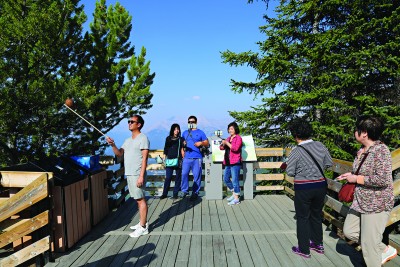 We'll Get There Fast and Then We'll Take It Slow

Putting the construction of the image to the test, Kotama Bouabane undertakes a satirical investigation of the colonialist meaning attached to the photograph of a coconut.

These exhibitions are part of the Inventing Risk programming, which invites us to reconsider the way we make art and the way we think the image.

Kotama Bouabane has an MFA in Studio Arts, Photography from Concordia University, Montreal and a AOCAD from OCAD. His work has been exhibited in many galleries including Centre A (Vancouver), Contemporary Calgary (Calgary) & Gallery 44 Centre For Contemporary Photography (Toronto). He has received many awards and grants from the Toronto Arts Council, Ontario Arts Council & the Canada Council for the Arts. He currently holds positions in the Photography Department at OCADU and York University. Upcoming exhibitions include The New Gallery in 2018. 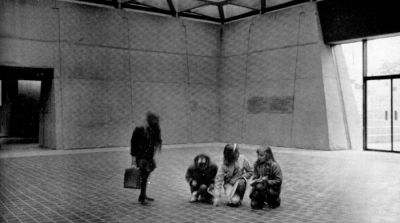 "When Form Becomes Attitude" curated by Noa Bronstein with the following artists:

Join Guest Curator, Noa Bronstein, and artists Kotama Bouabane, Maria Litwin, and Babak Golkar while they discuss the role of monuments and concepts around monumentality in constructing cities, nations and ideologies.

UTOPIA FACTORY is a research and exhibition project that engages in larger discourses about the conceptualization of communities and their landmarks from a historic ...

CONTACT Primary Exhibition by Kotama Bouabane: WE'LL GET THERE FAST AND THEN WE'LL TAKE IT SLOW 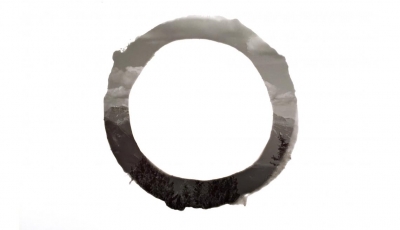 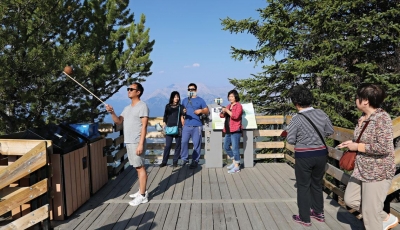 To keep (something) in position: props in contemporary photography
Gabrielle Moser in Conversation with Sameer Farooq, Bojana Stancic and Kotama Bouabane

What role do props play in contemporary photographic practice? Neither costuming nor part of a set, the prop is an inanimate but moveable object that must be activated by a human agent: a “thing” that gains meaning through the context of its use. By bringing together artists, curators, historians and performance studies scholars to consider the use of props in photographs (both historical and contemporary), this panel discussion examines the ways objects help us to write and rewrite histories.

We’ll get there fast and then we’ll take it slow is a new body of work by Kotama Bouabane that explores how images are constructed, deconstructed and materialized through an experimental ethnographic approach. The exhibition builds from an image of artfully arranged coconuts from a 1970’s Kodak manual on colour correcting, which suggestively pictures the coconuts cracked open as drinking vessels. For Bouabane the dramatic presentation of the image within the banal technical manual demonstrates photography’s complacency in the exoticisation and commodification of its subject, with the coconut becoming shorthand for exotic travel locals, leisure and luxury.

Taking its title from the Beach Boys song “Kokomo”, another shorthand for tropical destinations and a common misinterpretation of the artist’s first name, the series obsessively takes coconuts as form, medium and content. Images created from a pinhole camera made out of a coconut were processed with coconut water in the chemistry, while a cast coconut formed from coconut oil is presented atop a mound of black sand. It is in this slip between object and image that Bouabane humorously and self-reflexively attempts to recon the object within its field of representation and reengages the image as a mutable site for contemplation.

Supported in part by the Post-Residency Award presented by Visual + Digital Arts at The Banff Centre, presented in partnership with Scotiabank CONTACT Photography Festival

Kotama Bouabane has an MFA in Studio Arts, Photography from Concordia University, Montreal and a AOCAD from OCAD. His work has been exhibited in many galleries including Centre A (Vancouver), Parisian Laundry (Montreal), Gallery 44 (Toronto). He has received many awards and grants from the Toronto Arts Council, Ontario Arts Council & the Canada Council for the Arts. He lives and works in Toronto and is represented by Erin Stump Projects.