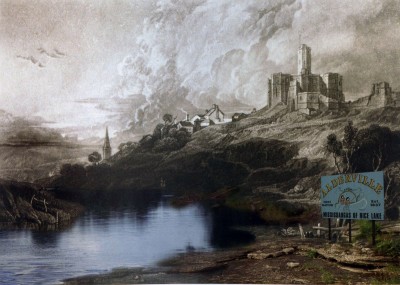 Listen and look at multisensory art representing the land beyond landscape.

Paintings and picturesque photographs of Canada’s rugged wilderness and untouched nature continue to permeate our media and underwrite our national identity. Yet the Canadian landscape has rarely ever been untouched. The land has long been inhabited. There have been many centuries of cultural production by Indigenous Peoples that represent the land and the connection between nature and human experience in very different ways from the traditions encompassed within Western landscape art. During recent decades, new generations of artists working in Canada have drawn from a wealth of other non-Western practices and developed new forms of media to represent the land beyond the romantic, expressionistic styles and pictorial forms that have become so familiar. These artists invite us to consider our own presumptions and relationship to the places around us—beyond seeing them as scenic or banal, as sources of investment and industry, or as sites of recreation.

Gathering works by over a dozen artists from across Canada, Ground Signals features immersive, multisensory art that engages with land and water. The exhibition includes ceramic bowls that emit environmental audio recordings and Indigenous songs from northern Quebec; a towering sculpture of woven copper wire that broadcasts shortwave marine radio reports from a proposed pipeline terminus on British Columbia’s coast; a time-travelling shadow machine made of wax, paint, and human hair that transports visitors to the deep past of Tahltan territory; a gigantic mural of found blankets and building materials framed in words and writing about waterways impacted by industrial accidents; composite videos of Southern Ontario vistas morphing into English Romantic landscape paintings; and a solar-powered culture station collects stories in exchange for energy.

Building on several recent Surrey Art Gallery exhibitions that have addressed landscape, ecology, territory, and mapping, Ground Signals challenges viewers to listen and experience the land in fresh  and compelling ways through a combination of sounds and images.

Join us for the opening party on September 23.

Passed in the Stuck 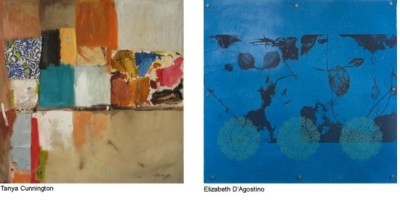 While in Europe, OCAD alumna Tanya Cunnington began to examine the roles of the artist, both past and present, and realized that she felt extremely drawn to the past. She began to paint cityscapes as a means to express her strong interest in certain cities as they related to art history.

Passed in the Stuck is comprised of mixed media collages which the artist sees as symbolic of these pasts. They are urban landscapes broken down into pure visual abstraction. 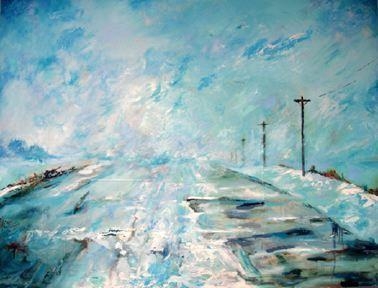 Waters of life and art

North America’s Great Lakes hold 21 per cent of the planet’s fresh water. These five massive bodies of water are vital to the health and wellbeing of 33 million people in Canada and the United States. It’s little wonder the Anishinaabe call them the “lifeblood of Mother Earth.”

Presented by the Office of the Lieutenant Governor of Ontario, the exhibition Identity: Art Inspired by the Great Lakes offers glimpses of the lakes and their landscapes through painting, photography, sculpture and social media. Among the sundry artists gathered for this show are three with deep OCAD University roots:

In this InStudio feature, we are re-presenting the works by Reid, Devine and McMaster on display in Identity. And we shot a video that will give you a virtual tour of the exhibition, which is mounted in the Lieutenant Governor’s magnificent nineteenth-century suite at Queen’s Park.

INSTUDIO: What was the genesis of this exhibition?

Debi Perna: Lieutenant Governor Elizabeth Dowdeswell’s key objective was to bring emphasis to the Great Lakes as a source of pride and identity for all Ontarians.

Lani Wilson: In order to accomplish that goal, Her Honour sought to showcase contemporary artworks, while at the same time acknowledging the traditional inspirations of historical paintings.

INSTUDIO: What is the significance of the title “Identity”?

Perna: Identity functions as the exhibition’s title on many levels. At its deepest, personal identification with these lakes was a sentiment expressed by almost all the participating artists, however diverse their approaches and experiences. Wanda Koop’s painting, for instance, reveals the powerful impression made on her by a voyage down the St. Lawrence Seaway. Tom Campbell says the shores of Georgian Bay hold a central place in his psyche, while Charles Meanwell returned to the region around Lake Superior where, as a young man, he had spent time planting trees.

Wilson: As we developed the show, we found that artists wanted to tell us about their own connections to the Great Lakes. They spoke of the lakes with awe at their vastness and of their importance to the province and its history. The sense of connection to and identification with the lakes is vivid, for example, in Laura Pedersen’s The Leuty Project, which combines photographs of the same Lake Ontario view she took each day for a year and shared on social media.

INSTUDIO: How do you explain artists’ ongoing engagement with landscape art?

Perna: Identity also speaks to the perennial fascination of landscape art, which itself, I believe, stems from the natural environment’s undeniable presence in our lives.

Wilson: Artists are forever pursuing new ways to depict their surroundings. They seek to re-experience the landscape through new and various media, and to use these outlets to create memories, moods and emotions at the same time as the landscape continues to change around us.

INSTUDIO: How do you interpret the works of George Reid, Bonnie Devine and Meryl McMaster within the context of the exhibition?

Wilson: The eight George Reid paintings that greet visitors as they step into Her Honour’s suite are part of a donation of over 400 paintings Reid made to the Government of Ontario in 1944. They are superb examples of traditional landscape art, and their specific connection to locations across southern and northern Ontario make them easy to relate to and enjoy.

But Reid’s canvases are more than historical illustrations of Ontario’s landscape in the early 20th century. They are high-quality examples of technique, line, form and colour. Each one is a deeply thoughtful composition. 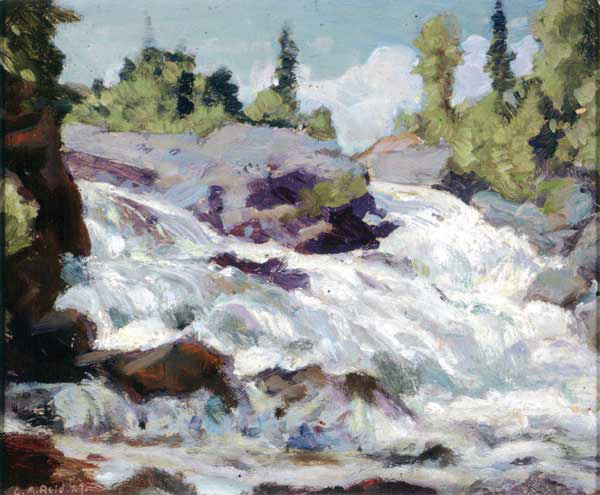 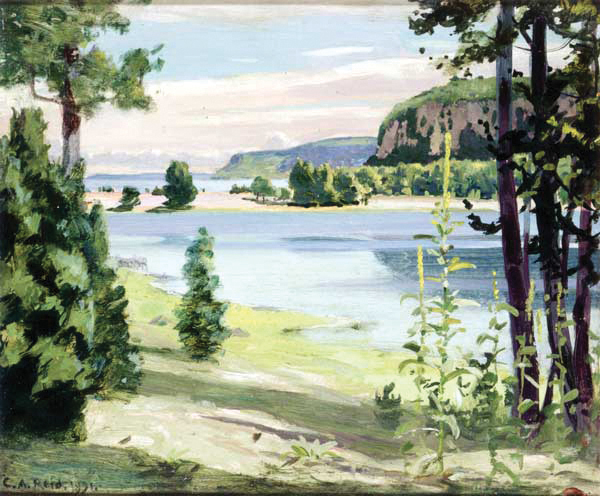 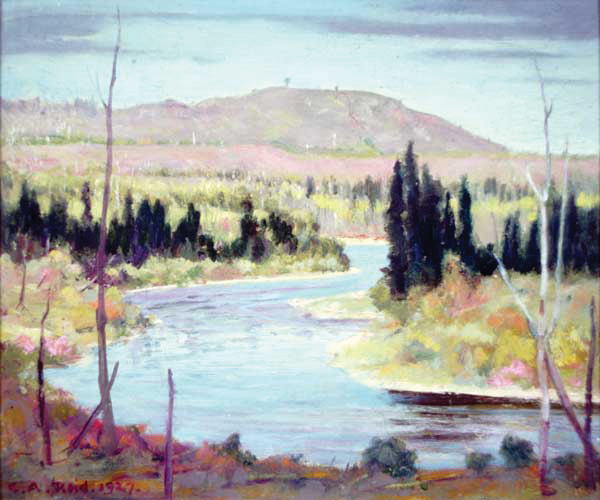 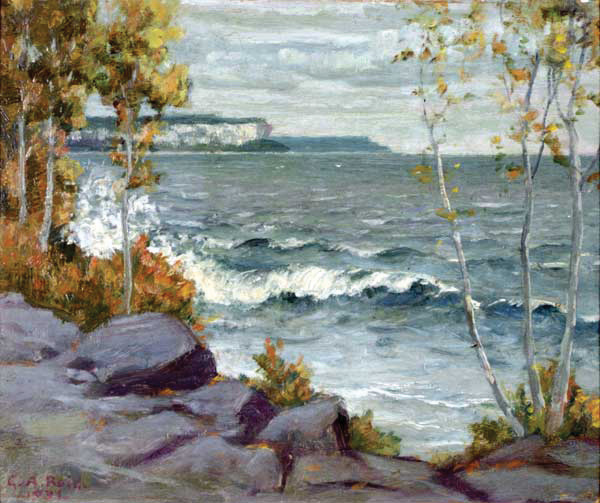 Perna: Meryl McMaster’s series In-Between Worlds explores her bi-cultural heritage and self-identity. Here, McMaster incorporates imagery that I’m not sure can be confined to the landscape genre per se. That said, both landscape and identity factor significantly into her inspired art.

Bonnie Devine’s conceptual mixed media and cast glass sculpture bring a powerful contemporary connection to her Ojibwa heritage. Devine’s visual interpretations of cultural stories from her past and her strong link with the place where she grew up in Northern Ontario express the essence of the theme of landscape and identity this exhibition sought to illuminate.

Meryl McMaster
Letter to Sandy, 2008
Diptych, mixed media and graphite on paper, giclee print of a digital image. Both mounted on canvas
60.9 cm x 182.8 cm
Courtesy of the artist 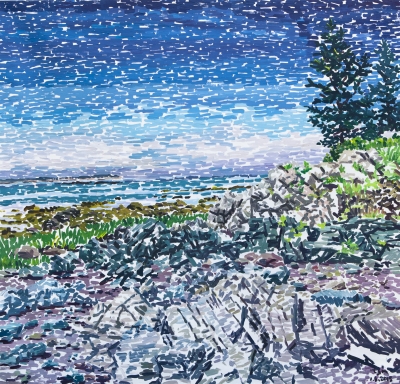 Over the past 40 years, Chinkok Tan has become one of Canada’s most prolific painters. Possessing an innate knowledge of how to capture the essence of light and colour on canvas, Tan’s large scale pieces evoke the quiet, serene beauty of landscapes. What makes his paintings unique is that they are as emotionally powerful at a distance as they are close up; inviting the viewer to experience the meditative feeling of being in the natural world.