ViewerCentric: Visualization engineering towards a tool for media discoverability

A key component of this research is finding ways of combining multiple data sets and presenting the results in an actionable way. The ViewerCentric interface provides its users with the means to develop effective and measurable, online marketing strategies; find and assess audiences, identify opportune channels for reaching these, and evaluate messaging, funding and advertising opportunities and reports that can be submitted to funders, broadcasters, sponsors, and stakeholders.

Researchers will extend the system to other cultural content that has or could have a digital component or tag such as visual art, live entertainment, music and publishing - supporting its discoverability and user analytics. Currently editors and independent producers rely on hunches and creative vision without understanding the varied demographic differences of their audiences into account, while advertising agencies and brands primarily consider data. The objective is to help cultural industries and not-for-profits monetize content and balance personalization, market drivers and editorial direction.

Please send submissions for the next issue of the OCAD Insider to Christine Crosbie by February 9, 2018.

For 2007/08, Graeme is lecturing in the Faculty of Design to Advertising students about agency management and business practices.

For more than 25 years, Ann Urban has worked in the highest levels of Canadian Advertising.

Ann graduated from the OCAD with scholarships in both design and advertising, and quickly moved to senior positions at several major multinational agencies, including McCann and JWT.

100+ Come out to hear panelists debate The State of Martech: AI vs. The Human Touch 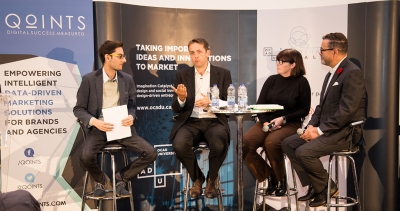 On Tuesday November 1, Qoints and OCAD U’s Imagination Catalyst hosted their first collaborative event together in a series we’re calling the “State of MarTech.” The purpose of this event, and future State of MarTech events, is to discuss and dissect the current Marketing Technology (MarTech) landscape, and how it might change in evolve in the future.

The topic of the day centred around the topic of Artificial Intelligence (AI) and the evolving role it plays in the digital marketing space. Qoints CEO and Co-founder Cory Rosenfield moderated a panel that included Michael Poyser (VP Analytics, Canada @ Aimia), Sandy Kedey (Chair of Advertising @ OCAD U) and Paul Allamby (Chief Marketing Officer @ Mirum Agency). The main question that the panel came to debate was whether or not AI could conceivably become so advanced that humans would no longer be needed to develop, execute and evaluate digital marketing campaigns. With programmatic ad-buying already so entrenched in today’s media planning, are we at the precipice of a dramatic shift in the digital marketing landscape (as we appear to be in so many other industries)? Read more http://bit.ly/2fGxCD3

(Toronto—October 10, 2013) OCAD University is the first Canadian post-secondary institution to partner with Indiegogo, enabling OCAD U start-ups to be featured under a university-sponsored page.

The unique partnership provides OCAD U start-up companies with valuable campaign marketing support, vitally important in distinguishing these entrepreneurs from the sea of campaigns found among such increasingly popular crowd-funding platforms.

“We have seen that university communities have a wealth of ideas and ideals. We are thrilled to work with OCAD U as the first Canadian university Indiegogo partner to bring these innovative and world-changing ideas to the next level via crowd-funding.  We look forward to working with many more,” said Bre DiGiammarino, Education and Social Innovation Director for Indiegogo.

To kick off the new partnership, OCAD U today kicks off Indiegogo campaigns by start-ups Sprout Guerrilla and PUSH, two incubator companies of OCAD U’s centre for entrepreneurship, the Imagination Catalyst.

Sprout Guerrilla’s crowd-funded campaign supports the company’s “I ♥ My City” project, in which participants are encouraged to create public art pieces out of Sprout Guerrilla’s DIY moss graffiti kits in a display of city pride.

“Moss graffiti can transform urban streetscapes,” said Sprout Guerrilla Founder Julie Forand. “It’s a creative and fun way to make a positive environmental impact in cities. Each person can make a difference, and the more people get involved the greater our impact will be.”

Campaign contributors can earn perks for their donations such as one or more of the moss graffiti kits, custom graffiti kits, “Moss my Business” or “Moss my Community” kits, Moss art by internationally acclaimed illustrator and OCAD U assistant professor Gary Taxali, or even a large-scale custom-painted moss graffiti mural.

“The PUSH Band seamlessly connects with your smartphone to allow for customized workouts, performance monitoring and progress review,” said PUSH CEO and co-founder Rami Alhamad. “It streamlines your progress so your routine constantly adapts to you in real time and over time while reducing the risk of injury.”

Results and achievements can be shared with friends, teammates, personal trainers or coaches for an enhanced social and competitive training experience. Users can compare their performance to others with the PUSH app’s live view where athletes’ data are streamed to a television in real time. PUSH also makes it easy for coaches and trainers to access performance results to visualize trends and compare individual progress to the team as a whole.

The PUSH Indiegogo campaign is already nearly halfway toward meeting its crowd-funded target. The Band will be available for pre-order as of October 10, 2013 for $149 USD, with shipping commencing in May 2014.

Sprout Guerrilla:
Founded on the principles of sustainability and effective environmental design, Toronto-based social purpose business Sprout Guerrilla (www.sproutguerrilla.com) seeks to green the world’s urban centres, one blank wall at a time. Sprout Guerrilla is founded by a SheEO, and is currently being supported by OCAD U’s Imagination Catalyst.

Indiegogo:
Indiegogo (www.indiegogo.com) empowers people around the world to fund what matters to them. As the largest global crowd funding platform, campaigns have launched from every country around the world with millions of dollars being distributed every week due to contributions made by the Indiegogo community. At its core, Indiegogo is the equal opportunity platform dedicated to democratizing the way people raise funds for any project — creative, entrepreneurial or cause-related. The company was launched in 2008 and is headquartered in San Francisco, with offices in Los Angeles and New York.

About OCAD University
OCAD University (www.ocadu.ca) is Canada’s “university of imagination.” The university, founded in 1876, is dedicated to art and design education, practice and research and to knowledge and invention across a wide range of disciplines. OCAD University is building on its traditional, studio-based strengths, adding new approaches to learning that champion cross-disciplinary practice, collaboration and the integration of emerging technologies. In the Age of Imagination, OCAD University community members will be uniquely qualified to act as catalysts for the next advances in culture, technology and quality of life for all Canadians.

Technology and data enable marketers to deliver communications that are much more relevant through effective micro-segmentation, sentiment analysis, behavior prediction and personalization. However, given the excessive volume and extremely diverse nature of the content, companies are sometimes unsure about how to proceed with their data in order to turn it into actionable insight.

DATA MARKETING 2013 will address these challenges with a unique approach.