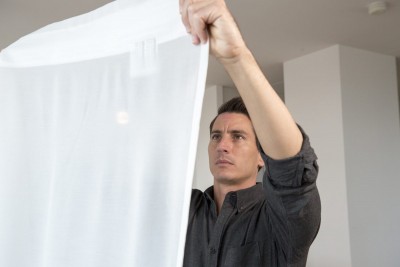 Together with a team of engineers, designers and specialists, OCAD U alumnus Mauricio Affonso, has been working on an affordable solution to clean indoor air. GUNRID – The air cleaning curtain has been developed using a mineral-based surface treatment enabling the curtain to break down air pollutants when it comes into contact with light.

The unique technology was developed by IKEA together with universities in Europe and Asia, IKEA suppliers and innovators. The air purifying curtain, available in IKEA stores next year, breaks down common indoor air pollutants such as odours and formaldehyde. Similar to photosynthesis found in nature, the process is activated by both outdoor and indoor light.

Born and raised in Brazil, Affonso moved to Toronto to pursue his Industrial Design degree at OCAD U. Since graduating in 2007, his career has taken a stellar trajectory. After working as Creative Lead for Umbra, Affonso went on to graduate with a Master of Arts degree from the Design Products program at the Royal College of Art. Since then, Affonso has worked as a designer for LEGO in Denmark and he currently works in Sweden as a Product Developer for IKEA.