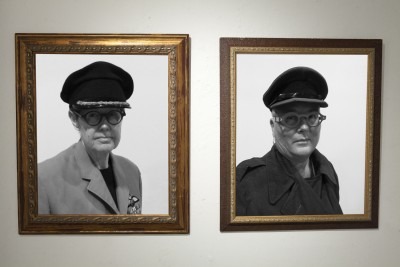 Times being as they are, work is scarce, pensions non-existent, especially for two women Air Force generals. Awarded as fearless revolutionaries in the early 1900s, valiant Air Force pilots in WWII, and heroic leaders in the Canadian forces, they are dropped, through political exigency, to labour in obscurity sweeping floors and cleaning tables in a Toronto cafe.

In General(s) Labour ARTIFACTS conflates the domestic and the larger notion of women’s labour with the “work” of an artist. In process and practice, ARTIFACTS intentionally poses a problem, a question, to stimulate action and reflection.  Dialogue between themselves and among others is their act of creation.

ARTIFACTS, formed in 1983 by Pam Patterson and Leena Raudvee, produces feminist collaborative works which combine the concerns of art and theatre; they have fused these traditions into a unique hybridity. Ever cognizant of gender politics and cultural normalization, ARTIFACTS engages in deconstructing various contemporary societal issues by exploring women’s bodies across speculative edges and in liminal spaces. While concentrating on performance, ARTIFACTS has also created video and visual exhibitions.  Research-in-process and doing-as-action define their practice.