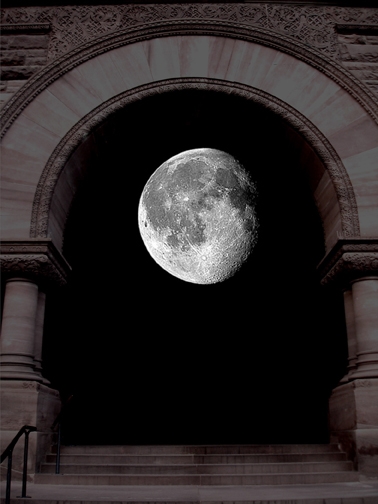 As Earth's closest celestial body and only natural satellite, the moon has engaged our curiosity and imagination over millennia and across cultures. Contemporary artists use the moon as both a source of inspiration and investigation. Lunar Attraction features artworks and interactives that explore our longstanding fascination and connection with the moon, ranging from myths about the connection between werewolves and the full moon to the gravitational pull that controls Earth's tides to the 21st-century international race to build a base on the moon.

Susan and Appy Chandler, the East India Marine Associates and the Art & Nature Committee of the Peabody Essex Museum provided support for this exhibition.

Adam David Brown is a multidisciplinary artist living in Toronto, Canada. His work is guided by the principle of –less is more–, and is frequently generated by his interest in science, language and the passage of time.

A graduate of the Ontario College of Art and Design, he completed his Masters of Fine Art at the University of Guelph in 2007.

Adam David Brown has exhibited work in Canada, Europe, Central America and the United States. His solo exhibition at MKG127 in 2009 was reviewed by Artforum and Canadian Art and brought his work to the attention of the Toronto Friends of the Visual Arts who awarded him their 2009 Artist Prize.

He was recently awarded an Artist Grant by the Ontario Arts Council and a Project Grant by the Canada Council For the Arts. His work is held in various private, public and corporate collections, including The Art Gallery of Ontario.