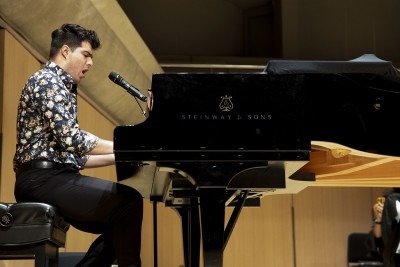 First Nations musician Jeremy Dutcher’s performance was one of the highlights of the 2018 OCAD U convocation ceremonies. Now, the composer, pianist and operatic tenor has made the shortlist for the prestigious Polaris Music Prize, presented by CBC Music.

Dutcher’s debut album, Wolastoqiyik Lintuwakonawa (Our Maliseets Songs), features the rearrangement of early 1900 wax cylinder recordings from his community, Tobique First Nation in New Brunswick. He learned of the recordings from an elder and tracked them down at the Canadian Museum of History in Gatineau. The music on his album meshes voices from the recordings with classical and electronic music, creating a unique genre of its own. Dutcher says fewer than 100 people speak Wolastoq today.

Albums released between June 1, 2017 and May 31, 2018 can be considered for the Polaris prize. An independent jury of music journalists, broadcasters and bloggers from across Canada determine the Long List and Short List. Eleven people from the larger jury pool are chosen to serve on the Grand Jury. This Grand Jury will convene on September 17, the night of the gala, to select the Polaris Music Prize winner. This year it takes place in Toronto at the Carlu.