This event is a collaboration between Canadian Creative Writers and Writing Programs (CCWWP), TIA House (University of Calgary), and OCAD University, Creative Writing, co-sponsored by the Writing and Learning Center and organized in conjunction with the CCWWP board meeting to take place Sunday, October 29th at OCADU.

The October 28th 2017 program is free and open to OCAD University students and faculty, students and faculty from across Turtle Island, CCWWP members, Toronto writers and the general public. Please write cblack@faculty.ocadu.ca to confirm your presence using the subject: Writing in Dangerous Times RSVP.

Please contact 416-977-6000 extension 2205 or accessibility@ocadu.ca for information on the best barrier-free routes on campus, Wheel-Trans pick-up and drop-off points, locations of elevators and accessible washrooms, requests for ASL translators, or information in alternate formats. 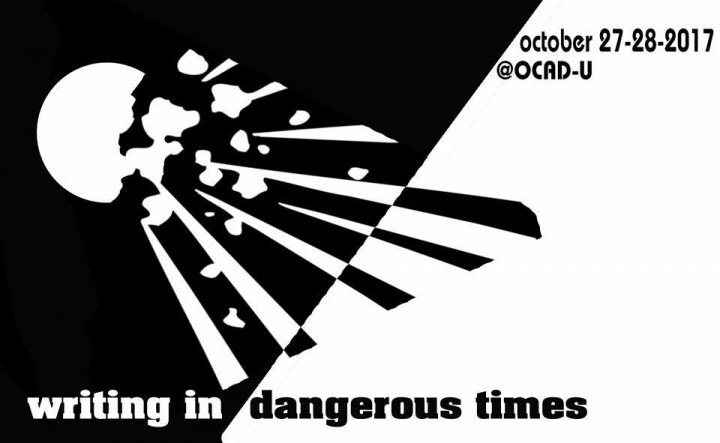 October 14 is a federal election day in Canada. Students (faculty and staff) who have questions about voter eligibility, registration, location of polls, and more can ask questions of Elections Canada.

To establish support for culture at a political level, the arts must first create a greater legitimacy with citizens, and find new ways to build democratic consensus about its importance. John Holden, author of 'Cultural Value and the Crisis of Legitimacy', asserts that establishing a different alignment between culture, politics and the public will require courage, confidence and radicalism. Drawing on his recent publications, John will show how different groups in society value culture in different ways, and he will examine how the changing role of the arts and culture in contemporary society can influence public policy.
You can read more about John Holden and his work at http://www.demos.co.uk/people/johnholden
Sponsored by The Laidlaw Foundation, Ontario College of Art & Design, The Department of Canadian Heritage, The Ontario Arts Council, The Ontario Trillium Foundation, The Metcalf Foundation , The Ontario Ministry of Culture, City of Toronto Culture, The Toronto Arts Council, Toronto Community Foundation and Business For the Arts.
RSVP by January 26, 2008 to sbrand@laidlawfdn.org 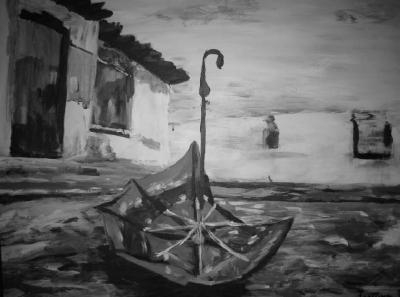 Gosia Komorska, Zlatka Kovac and Charlotte Mikolajewski will address issues of war and peace through painting. The work explores landscapes of war zones, dimensions of dreams, as well as haunting memories and longing. There is a thread of fear and restless anxiety in all the works. The exhibit is titled after a poem by William Wordsworth.

This is a short clip of the upcoming full length documentary film on Asylum Process in the US, entitled "Eyes That Don't See, Hearts That Don't Feel" by Producer/Director Paula Gardner 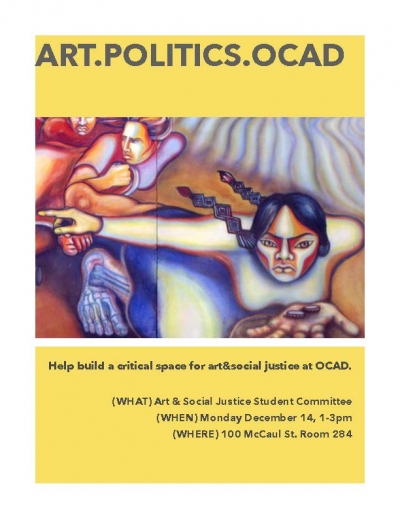 OCAD Illustration alumni Anita Kunz and Barry Blitt, headlining a special talk by the Society of Publication Designers in New York on their portraiture of President Obama. It’s a testament to Canadian’s unique perspective and influence on the US politics and our program’s global contribution to the profession. 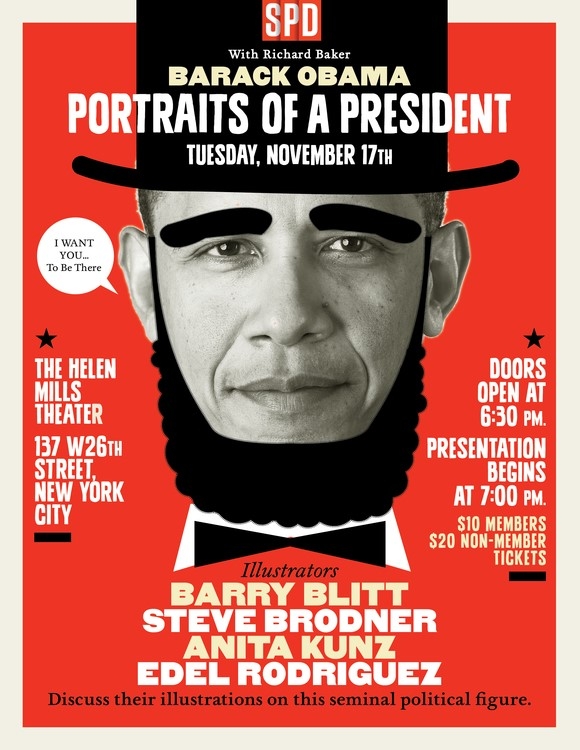 Be heard – Vote in the federal election on Oct. 19

Ontario’s university presidents have signed a pledge to support student participation in the upcoming election. According to the Council of Ontario Universities, in the 2011 federal election voter turnout among youth aged 18 to 24 was 39 per cent – far below the 75 per cent participation rate for citizens aged 65 to 74.

This year OCAD University will be hosting a polling station for the Spadina-Fort York riding only. If you do not live in the riding, you must vote in the riding of your residence.

As a student, you have another option: Elections Canada offices will be open on 39 college and university campuses from October 5 to 8. Any student can vote at these offices, regardless of where their home is located. Nearby locations include University of Toronto and Ryerson University (please note, OCAD U is not among these office sites) 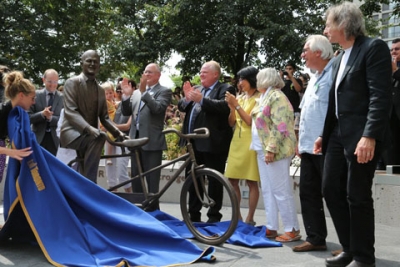 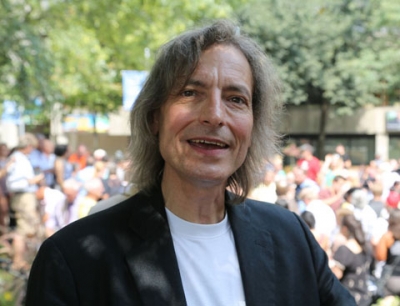 Jack’s Got Your Back. Stronger Together: The Layton Memorial, was unveiled in a special tribute ceremony on August 22, 2013, two years from the day Layton passed away on in 2011. It’s located at the newly named Jack Layton Ferry Terminal, 9 Queens Quay West, at the foot of Bay Street.

The life-sized sculpture depicts Layton on the back of the tandem bicycle he often rode with his wife, Olivia Chow. It’s a fitting memorial to things Layton loved and championed in this city, including cycling, the waterfront, the Toronto Islands and working together. The installation also includes a flower bed, donor wall and Layton’s final message to Canadians: “So let us be loving, hopeful and optimistic. And we’ll change the world.”

Chow, the NDP MP for Trinity-Spadina, the riding OCAD U is located in, is a trained sculptor herself. She studied at OCA during her university years and worked professionally as an artist for years, prior to becoming a politician. After Layton’s death she made her own memorial sculpture of him for his gravesite.

Chow credits Toronto Island residents for the initial idea for the public ferry terminal sculpture. She took the idea and approached MST Bronze Ltd., a well-known foundry in Etobicoke, and worked closely with Pellettier in the process of its creation.

Pellettier, who balances his studio teaching at OCAD U with his own work at his studio in Gibraltar Point Centre for the Arts on Toronto Island, says he appreciated Chow’s input in capturing his expression, and getting his smile right.

“Right from the beginning she’s been a big part of this,” said Pellettier. “She has far more intimate knowledge of Jack as far as getting his presence fully there.”

The sculpture was funded by the Ontario Federation of Labour and the City of Toronto donated the land for it. It’s estimated that two million people will walk by and interact with the sculpture every year—it’s designed so that you can have a seat on the bicycle and have your photo taken.