The OCAD U Zine Library presents the 2nd OCAD U Poster Fair on October 26th, 11am-6pm!

Located in the lobby of 100 McCaul, the poster fair will feature OCAD University students selling their original prints, postcards and posters. The fair will represent a range of prices and media, from screenprinted and letterpress to digitally printed works.

**Event image by Connie Le, who will be one of the vendors at the fair ** 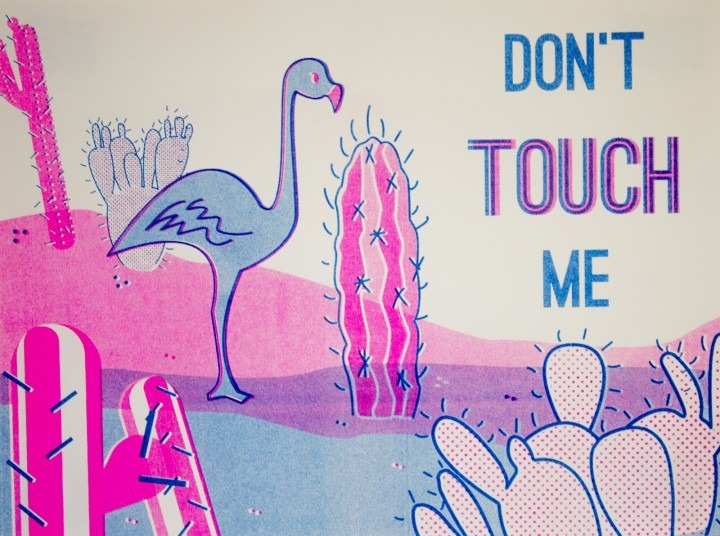 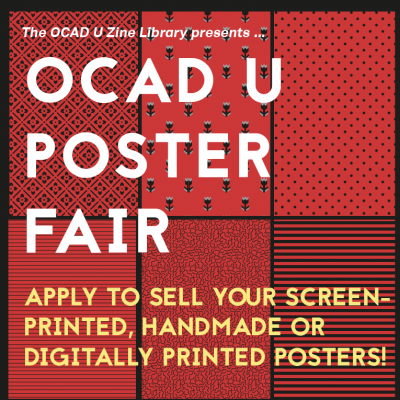 The OCAD U Zine Library presents the 2nd OCAD U Poster Fair on October 26th, 11am-6pm. We are currently looking for student vendors to sell screenprinted, risographed, letterpress, handmade or digitally printed posters of their original art and design.

We will be accepting applications from current OCAD U students until October 12th (please contact us through your student email!). Registration will be open to alumni and local artists & designers after that date. Tables are free.

To apply as a vendor, please email ocadzinelibrary@gmail.com with your name, contact information and 2-3 images of the work you intend to sell at the event. 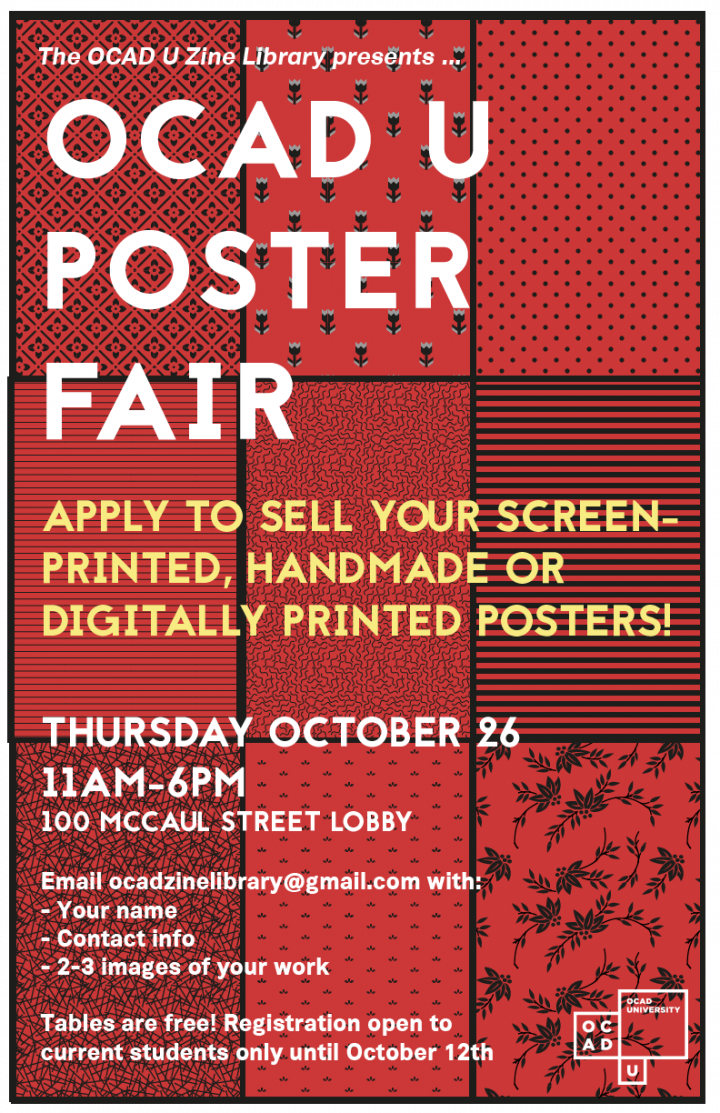 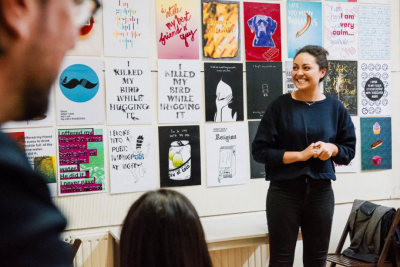 Introducing participants to the expanded field of visual communication and the broad definition of the discipline. This workshop is an exploration in research, concept development, illustration, photography, and typography.

Participants will be given a theme, and are required to research and develop the concept through a series of two or more over-sized posters. The objective is to create a cohesive and unique solution to a given problem. This workshop is meant to challenge design thinking, processes, methods, and to help participants explore typography and composition in an experimental and purposeful way. 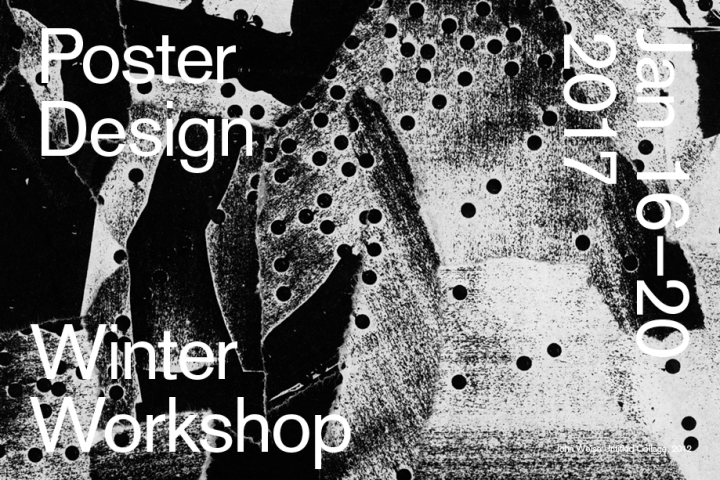 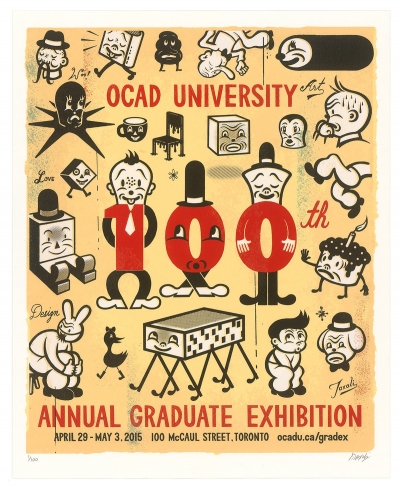 It's the professional illustration annual competition that gets the most entries (as it's international and has the most reach), and so being selected by the jury is a very nice honour.  It will be published in July of this year. For more information: 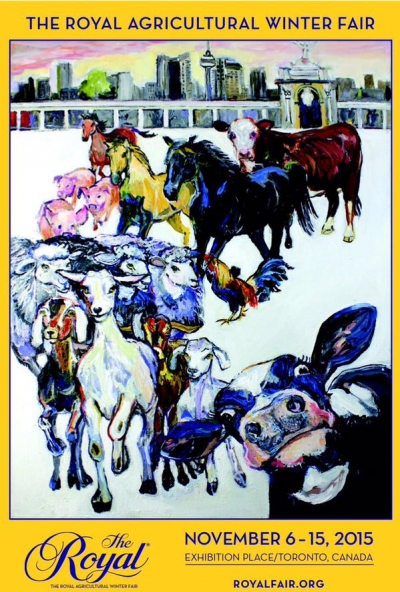 Is the cow photobombing the picture, or taking a selfie? The playful painting We are the Champions by alumna Janice Ykema (BDes Illustration, 2005) has been chosen to represent this year’s Royal Agricultural Winter Fair.

In 2014 Ykema had a commercial booth at the Fair so her work was known to organizers. This year she was one of three artists who was asked to submit a proposal for the 2015 poster.

Ykema enrolled at OCAD U (then OCA) when she was 17 but left her studies to raise a family. Twenty years later she returned to finish her degree. Many of her works feature animals and nature and are done primarily in acrylics.

When asked for words of advice for current students, Ykema responded:

“You are there to learn, so don't be satisfied with a B+, learn more. Practice, take risks, make your mistakes work for you and recycle the rejects!” 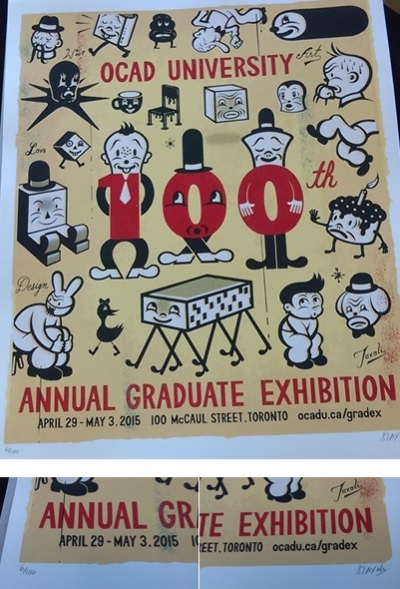 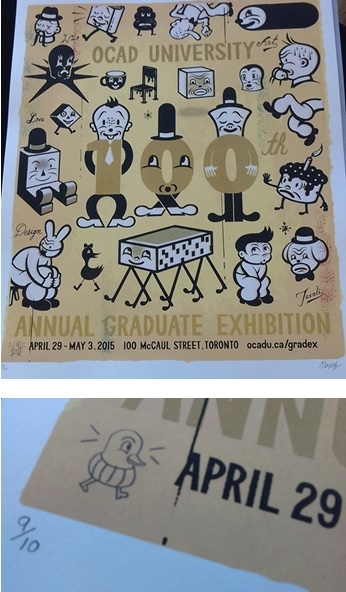 You can purchase a limited edition, signed and numbered silk screen print of Gary Taxali’s GradEx 100 poster starting Tuesday, April 7 at the OCAD University bookstore.  The bookstore is located at 51 McCaul Street in Toronto.

Award-winning illustrator Gary Taxali’s work is featured on the poster for GradEx 100, the centennial edition of OCAD University’s annual exhibition of graduating students’ work. Taxali is an OCAD U alumnus and associate professor of Illustration in the Faculty of Design.

More than 600 promising young artists and designers will be exhibiting at GradEx 100, displaying their final thesis work to more than 25,000 guests from Wednesday, April 29 to Sunday, May 3. The exhibition will fill all six storeys of 100 McCaul St., including the landmark Sharp Centre for Design, and will be open to the public.

Taxali’s signature pop culture imagery is infused with retro/vintage graphic style. His fine artwork has been exhibited in galleries in the United States and Europe as well as museums such as the Whitney Museum of American Art in New York and the Contemporary Art Museum in Rome. In 2011, two books of his work were released:  Mono Taxali, published by 279 Editions, and I Love You, Ok? published by teNeues. In 2012, the Royal Canadian Mint released a special edition of six 25-cent coins, which feature Taxali’s artwork.