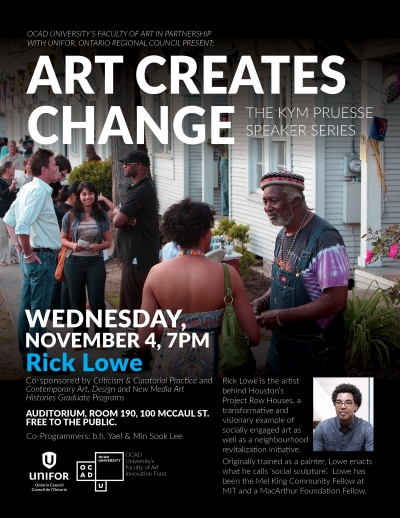 Rick Lowe is the artist behind Houston’s Project Row Houses, a transformative and visionary example of socially engaged art as well as a neighbourhood revitalization initiative. Originally trained as a painter, Lowe enacts what he calls "social sculpture." Lowe has been the Mel King Community Fellow at MIT and a MacArthur Foundation Fellow. 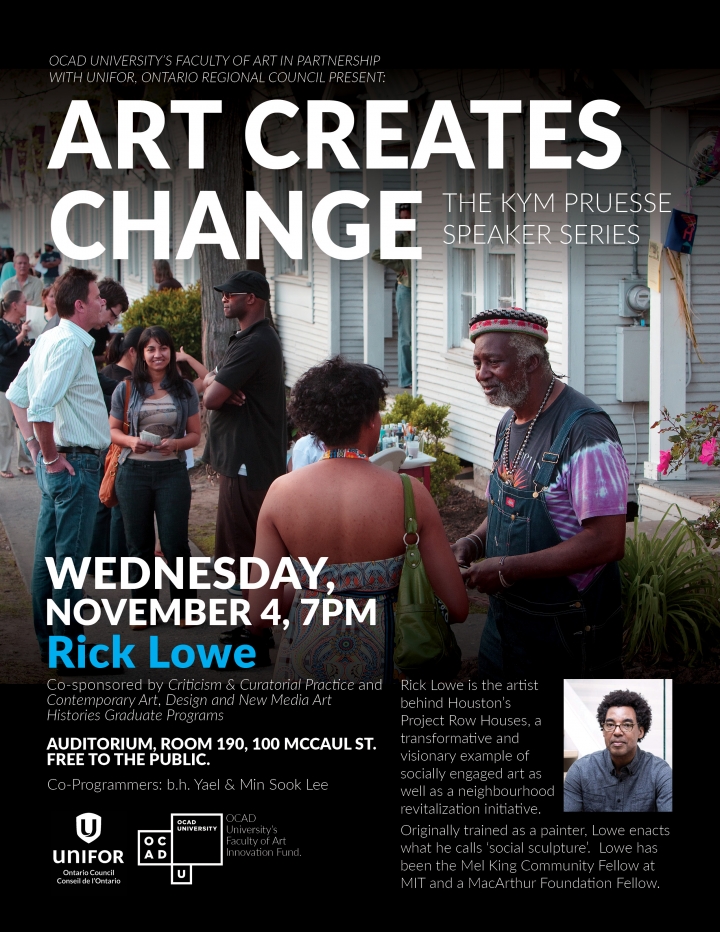 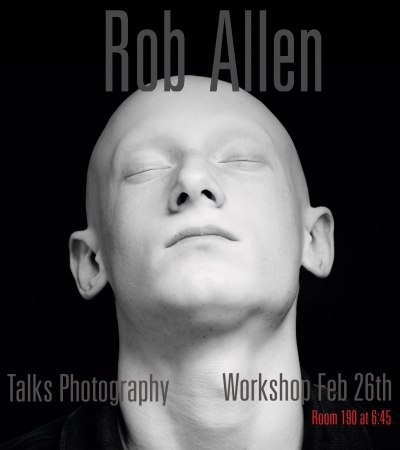 "Rob Allen is a photographic artist and educator working in Toronto. He has been a working as a professional photographer since 1989, pursuing his personal projects in his own time as well as exhibiting in solo and group shows. He holds a BFA and an MFA from the School of Image Arts at Ryerson University. While fully immersed in new technologies, Allen simultaneously explores the disappearing camera crafts of the twentieth century.

Recently, Allen has branched out into motion-picture production, still attentive to the rewards of patient observation. Allen enjoys thinking and working with ideas around the "Extended Portrait". The notion of the “extended portrait” has a long history in photography and implies capturing a multitude of revealing moments as well as the possibility of certain moments lasting longer than others."

Karyn Olivier, who was born in Trinidad and Tobago, received her M.F.A. at Cranbrook Academy of Art and her B.A at Dartmouth College. Philadelphia-based artist Karyn’s practice has interrogated the ways in which we engage with public space. The artist presents viewers with different scenarios that lead us to reflect on the ways in which we move our bodies through environments and respond to different locations.

Through discrete placement, rearrangement, embellishment, and replication of everyday objects in various sites, Olivier tries to shift our experience of the familiar. She explains, “This manipulation reveals the malleable and unfixed nature of objects and spaces — forcing us to reconcile memory(ies) with the present moment, collapsing the past with the present. The hope is to create a sleight of eye, a slit into something else — a conflation suggesting a visual accord that’s not necessarily there.”

Her public talk will include a discussion of her current installation, FREE LIBRARY, a social sculpture project exploring the site of the community grocery store in Toronto as a site of cerebral space engaging cultural identity, nostalgia, Caribbean intellectualism and pedagogy. 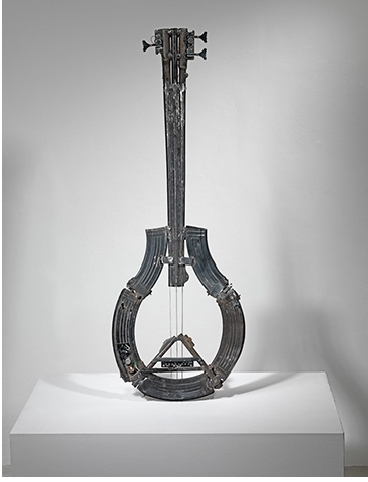 The Faculty of Art of OCAD U is pleased to present a public talk by artist Pedro Reyes, the university’s 2014 Nomadic Resident.

In 2008, Reyes initiated the ongoing Palas por Pistolas where 1,527 guns were collected in Mexico through a voluntary donation campaign to produce the same number of shovels to plant 1,527 trees. This led to Disarm (2012), where 6,700 weapons were transformed into a series of musical instruments. In 2011, Reyes initiated Sanatorium, a transient clinic that provides short unexpected treatments mixing art and psychology. Originally commissioned by the Guggenheim Museum in New York City, Sanatorium has been in operation at Documenta 13, Kassel (2012); Whitechapel Gallery, London (2013); and The Power Plant, Toronto (2014). Reyes lives and works in Mexico City.

A renowned environmental activist, philosopher, eco-feminist and interdisciplinary researcher, Dr. Shiva is celebrated for her work supporting people-centred, participatory processes towards sustainable agriculture and genetic resources. Trained as a physicist at the University of Western Ontario, Shiva is now based in Delhi, India. After leaving Canada, she became a researcher working in the fields of science, technology and environmental policy at the Indian Institute of Science and the Indian Institute of Management in Bangalore, India. In 1982, she formed the Research Foundation for Science, Technology and Natural Resource Policy, an informal network of researchers working to articulate the knowledge and environmental struggles of Indian farmers. Through this foundation, Shiva established Navdanya, India’s largest network of seed keepers and organic producers aiming to conserve indigenous seeds, biodiversity and food sovereignty.

For more than 15 years, Shiva has campaigned on the ethical and ecological impacts of genetic engineering. She has also organized campaigns on bio-safety and helped to formulate a citizens’ response to the introduction of genetically modified organisms (GMOs) in agriculture. Shiva, who started her work on biodiversity with the Chipko Movement in the 1970s, sees biodiversity as intimately linked to cultural diversity and knowledge diversity. To that end, she has campaigned nationally and internationally against “biopiracy” — the patenting of indigenous knowledge. Her book on the subject, Biopiracy, deals with the emerging corporate monopolies on the living resources of the poor.

Shiva has been instrumental in her work to exert pressure on the World Bank. She represented “Nature” at the People's Tribunal on the World Bank and IMF in Berlin in 1988 and was on the steering group of the People's Forum, which coincided with World Bank meetings in 1991. Shiva has also initiated major movements in India on World Trade Organization (WTO) issues, especially those concerning intellectual property and agriculture. She is a founding Board member of the International Forum on Globalization, the citizens' group dedicated to monitoring and intervening on the impact of globalization. She is also currently leading the International Campaign on Food Rights, which represents the collective right to knowledge and food security.

Shiva’s book Staying Alive: Women, Ecology and Survival (Zed, 1989) has had an international impact. She was a co-chair of the 1991 World Congress on Women and Environment, and she edited “Women, Ecology and Health: Rebuilding Connections,” in Development Dialogue (1993), the publication of the Dag Hammarskjold Foundation. Shiva has also launched a global movement called Diverse Women for Diversity, for the defence of biological and cultural diversity.

In 2003, Time magazine called Shiva an environmental hero, and Asia Week described her as one of the five most powerful communicators of Asia. Among her many awards are the Right Livelihood Award, the Order of the Golden Ark, the United Nations Global 500 Award and Earth Day International Award (1993), the Lennon Ono Grant for Peace (2008), and the Save The World Award (2009). She serves on the boards of many organizations, including the World Future Council, the International Forum on Globalization and Slow Food International.

(Toronto — September 17, 2010) The Goethe-Institut Toronto and the Faculty of Art at OCAD University (OCADU) present the 2010 CROSSMEDIAL Artists Residency with Nina Fischer and Maroan el Sani of Berlin from September 26 to October 3, with a free public talk on Thursday, September 30 at 6 p.m.

CROSSMEDIAL is committed to bringing leading-edge multi-media artists from Germany to OCADU and the Canadian arts community. CROSSMEDIAL artists cross different media platforms in their work while synergizing analogue and digital modes of studio production that illuminate interdisciplinarity, hybridity and critical engagement with the contemporary visual world. The residence is designed to bring visiting artists to Canada’s largest and oldest university of art and design, and engage them in dialogue with undergraduate and graduate students and faculty through public lectures, studio critiques, workshops and screenings. In 2008, the residence hosted Berlin-based multimedia artist Lillevan, and in collaboration with Yatra Arts, it sponsored a public talk and performance by Olaf Bender and Carsten Nicolai in 2009.

The Berlin-based art duo Nina Fischer and Maroan el Sani use film, photography, mixed-media installations and architecture to explore failed utopias. Also holding professorships in Japan, Fischer and el Sani have been featured in numerous exhibitions, including the Gwangju Biennale, the International Istanbul Biennale and the Sonar Sound Festival Tokyo. They illuminate urban culture, layers of civilization, life and decay, before turning to something completely different.

“We are very pleased to partner with Goethe-Institute and co-host the residence of Fischer and el Sani in the Faculty of Art,” said Vladimir Spicanovic, Dean for the Faculty of Art. “We look forward to have these two internationally known artist-educators interact with our community, and see their residence as an opportunity to extend cross-cultural dialogue on the meaning of contemporary art practice.”

“The Goethe-Institut is known for initiating and establishing lasting relationships between the Canadian and German arts scenes,” explained Sonja Griegoschewski, Director of the Goethe-Institut Toronto. “Our residency program with OCAD University is a perfect example of how we develop these in-depth connections.”

About the Goethe-Institut Toronto
The Goethe-Institut Toronto (www.goethe.de/toronto) presents important positions, contemporary ideas and arts practices from Germany and Europe to Canadians. Our current focus themes are Culture & Economy, City & Climate, and German film & media art. We organise residencies together with our Canadian partners, offer international liaison work and consulting as well as promote European cultural understanding, e.g. through our cooperation with other European cultural institutes across Canada.