Hogtown: The Politics of Policing (winner of the 2006 Hot Docs Award for Best Canadian Feature Documentary)  is an unblinking look at the Toronto Police Services Board (TPSB), a civilian body that exercises civilian governance of policing.  Historically, appointees to the board have been supporters of traditional policing methods.  This summer, things take a left turn.  A newly elected progressive Mayor appoints left-wing councillors to the TPSB.  Hogtown follows the unfolding friction as a politically divided board stickhandles charges of internal corruption in the force, community concerns of racial profiling and an enormous police budget request during a summer of unprecedented gun deaths in the city. More than a decade after its Hot Docs premiere, we return the film to the big screen to re-examine policing in city politics.  The screening will be followed by a special talk with Min Sook Lee.

Reel Asian has followed Min Sook Lee’s active involvement in the community, as her work focuses on identifying important and social and economic issues in Canada.

Lee is a recipient of numerous awards, including the Cesar E. Chavez Black Eagle Award, and the Alanis Obomsawin Award for Commitment to Community and Resistance. Canada’s oldest labour arts festival, Mayworks, has named the Min Sook Lee Labour Arts Award in her honour.

Currently, Lee is an Assistant Professor at OCAD University, her area of research and practice focuses on the critical intersections of art+social change in labour, border politics, migration and social justice movements.

A Statement from the Artist

I believe in the social function of art. The alienation of the artist from communities is a power blackout that goes both ways. I suggest that to forfeit the power of art to the mystification of ‘individual genius’ in pursuit of art for art’s sake is a strategy of political neutralization. My recent documentary work has been built around the experiences and stories of migrant workers in Canada. These projects have been produced in conversation with migrant justice activists and political allies in the broader social movement that counters border imperialism.  Activating the screen is a focus of my documentary work and creating spaces for my documentary projects to be discussed, expanded upon or used as an organizing tool is paramount to me. I have worked with unions, schools, community organizers, arts groups and faith groups to activate my documentary work. I believe more strongly than ever that genuine social and political change must be accompanied by media re-construction.  As Audre Lorde succinctly observed: “The master’s tools will never dismantle the master’s house.” 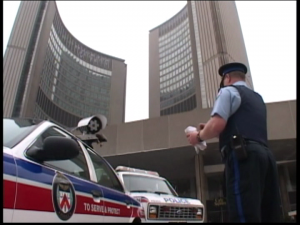