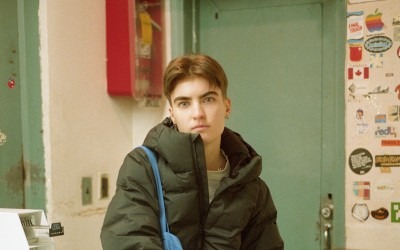 The Centre for Emerging Artists & Designers is excited to announce Dallas Fellini as the recipient of the inaugural Rosalie Sharp Pavilion Career Launcher.

Refurbished in 2018, the Rosalie Sharp Pavilion reimagines the use of the space to encompass many forms of experiential learning. Located on the 3rd floor of the Pavilion, the CEAD connects school, work, creativity and professional development to establish a dynamic community and environment. Recent OCAD U graduates were invited to apply for this opportunity for a private office/studio space in the Centre from November 2019 to April 2020.

Dallas is an arts facilitator, writer, and artist working interdisciplinarily in Tkaronto/Toronto. Their research and writing as of late centres on topics spanning anonymity, graffiti, popular culture, queer identities, and dance. Dallas holds a Bachelor of Arts (Honours) from OCAD University and is the 2019 recipient of the Medal in Visual and Critical Studies. They have published or forthcoming work in the Journal of Curatorial Studies, the Journal of Visual & Critical Studies, Acta Victoriana, and Canadian Art.

Over the course of their time here, Dallas will be incubating a new contemporary art magazine for emerging art writers and artists in Toronto.

I hope to create meaningful connections and interactions between artists and art writers in Toronto, and to lay the foundations for further collaborations.

As part of the Centre for Emerging Artists & Designers, the Career Development office supports the professional development of emerging OCAD U creative talent. The Career Launchers program offers unique, high-profile opportunities developed in partnership with industry leaders in order to help senior students and new graduates start their professional practice after school.

Temporary closures during the lift of sections of the scrim onto the Experiential Learning Centre on February 2 and/or 3. 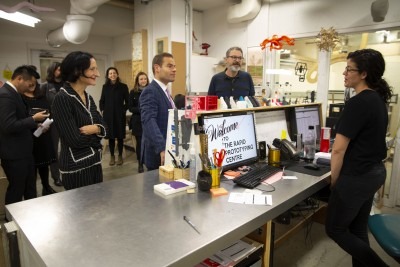 David Piccini, Parliamentary Assistant to the Minister of Training, Colleges and Universities and MPP for Northumberland-Peterborough South, toured OCAD University’s campus on October 30 for his first official visit.

Mr. Piccini was greeted at 100 McCaul St. by OCAD University President Dr. Sara Diamond before a guided tour of the main building. Tour stops included visits to the fabrication studios, drawing and painting studios, the newly refurbished George Reid House, and the iconic Sharp Centre for Design. Mr. Piccini spoke with faculty and staff, and engaged with current students about their experience in Canada’s largest, most comprehensive art and design university.

He toured the building with OCAD U benefactors Rosalie and Isadore Sharp, OCAD U Board Chair Jaime Watt, and members of the Ignite Imagination Campaign Cabinet. Mr. Piccini delivered special remarks on behalf of the Government of Ontario.

The Rosalie Sharp Pavilion’s refurbishment is part of the Creative City Campus renewal and expansion project. The Ontario Government provided $27 million in support through the Ministry of Training, Colleges and Universities. 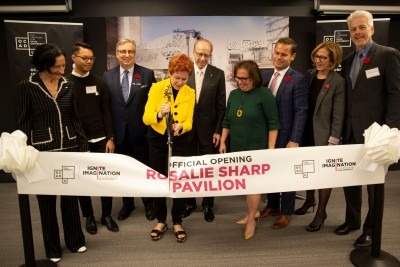 OCAD University officially celebrated the re-opening of the Rosalie Sharp Pavilion, at 115 McCaul St.  ̶  home of the Experiential Learning Centre. The building’s refurbishment is a milestone in the Creative City Campus project, boldly re-imagining the use of space to expand studio, digital and work-integrated-learning learning.

The Sharps bought the building in 1998 and generously donated it to OCAD U, followed by a $5 million commitment to the Ideas Need Space campaign in 2001. This led to the creation of the famed Sharp Centre for Design, designed by the late architect Will Alsop. In addition, the Sharps donated $4 million towards OCAD U’s current campaign, Ignite Imagination.

During the event, Leslie Gales, Chair of the Ignite Imagination campaign, announced the launch of Phase Two of Ignite Imagination: a target of $30 million to achieve a goal of $100 million dollars to complete the Creative City Campus project.

The renewal of the building was supported by the Government of Ontario through the Ministry of Training, Colleges and Universities, with a grant of $27 million towards the Creative City Campus project and the Government of Canada with $2 million in funding through the Strategic Investment Fund.

Tania Bortolotto of Bortolotto Architects designed the renewal of the building, which includes a stainless steel scrim. The scrim represents a data visualization of downtown Toronto streets overlaid with locations of art and cultural institutions frequented by the university’s students and areas of important public art. With the south portion of the scrim in place, further sections of scrim will be mounted on the west and north sides of the pavilion, in December. 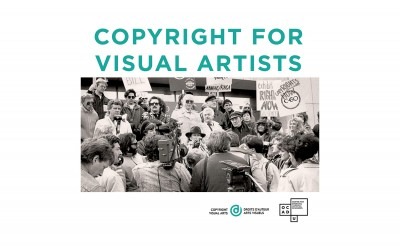 The more artists understand their rights, the better prepared they are in the marketplace. This will be a free and interactive presentation, presented by Copyright Visual Arts’ Licensing Officer, Rose Ekins. Topics include information about copyright royalties and the CARFAC Fee Schedule, the Artist’s Resale Right, Moral Rights, Fair Dealing, the importance of using a contract, and the benefits of joining a copyright collective.

The event will take place at the Experiential Learning Centre on the third floor of the newly opened Rosalie Sharp Pavilion at 115 McCaul Street with the Centre for Emerging Artists and Designers.

This event is open to OCADU students, grads, staff and faculty.

OCAD U is pleased to announce the Centre for Emerging Artists & Designers (CEAD) has moved into its new, expanded offices on Level 3 of the Experiential Learning Centre in the Rosalie Sharp Pavilion at 115 McCaul Street.

Over the summer and early autumn, the CEAD developed an expanded scope of activities to increase opportunities to help students and recent graduates succeed in the world of work. Their new space in the Experiential Learning Centre means they are now ready to facilitate this new programming: finding creative jobs and learning placements, special events and programs, professional mentorship and networking opportunities. The new space also includes presentation areas and workspace for employment partners, students and recent grads, as well as for visiting artists, designers and entrepreneurs who are collaborating with students.

While there remain a few finishing touches to be completed, the OCAD U community is welcome to stop in, say hi, meet the staff, learn about the latest opportunities, and check out the new CEAD facilities!

We’re preparing for another Creative City Campus milestone: the Experiential Learning Centre in the Rosalie Sharp Pavilion at 115 McCaul St. is ready to OFFICIALLY open its doors. In addition to becoming the new home for the Centre for Emerging Artists and Designers, the building will also include thesis space for students in Graphic Design, Advertising, Industrial Design and Integrated Media. An event will take place on Thursday, October 30 to honour donors Rosalie and Isadore Sharp for their continuing support in shaping our campus and programs. The event starts at 5 p.m. with remarks at 5:30 p.m. Light refreshments will be served.

An update on the status of the Experiential Learning Centre, George Reid House construction, Fabrication Studios, and the CCC Site Strategy for the campus expansion.

The latest Sharp donation follows the pledge of the previous commitment of $3 million, in 2014, to support the enhancement of the façade of the Rosalie Sharp Pavilion.

The Rosalie Sharp Pavilion, a separate building at the corner of McCaul and Dundas Streets, will house the OCAD University Experiential Learning Centre, a student-focused centre dedicated to studio-based learning across the university’s program areas, partnerships with community and industry, and training in professional and business skills.

“We are very grateful to Rosalie and Isadore Sharp for supporting our strong tradition of experiential learning that takes place both in the studio and in the community,” says Dr. Sara Diamond, President and Vice-Chancellor of OCAD University. “This flexible, multi-use student complex will provide dedicated, maker-based work areas, as well as spaces for collaboration and engagement with visiting artists and designers.”

The Sharps also donated $5 million in 2004 towards building the internationally acclaimed Sharp Centre for Design, designed by famed British architect Will Alsop. The building has been lauded by architect and arts critics alike and is one of the must-see stops for visitors to Toronto.

“We are inspired by the creation of a centre that will be a hub for student activity and experimentation, and we have great respect for President Sara Diamond’s dedication and imagination,” says Rosalie Sharp.  “With this donation, we are helping mark the Dundas Street gateway to OCAD University’s campus and Toronto’s heart of creativity and innovation.”  Since 1998, Rosalie and Isadore Sharp have donated more than $9.5 million to OCAD U.