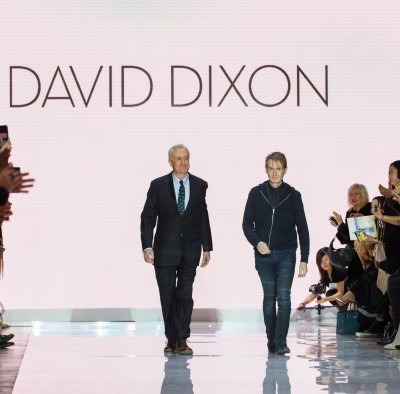 An expansive horizon, vibrant colour and innovative design – it was an exciting artistic collaboration at Toronto Women’s Fashion week in early March. A captivating watercolour of a figure standing on a sun-drenched beach served both as a stunning runway backdrop and as inspiration for the latest collection from one of Canada’s leading clothing designers.  David Dixon premiered his Fall/Winter 2018 line of women’s fashions. The painting is a work by Dr. John Semple (AOCA, 1975). At the end of the show, the painter and the designer, Dr. Semple and Dixon, were met with a standing ovation as they walked the runway together.

Former Chair of the OCAD U Board of Governors, Dr. Semple is a surgeon at Women’s College Hospital where he specializes in post-mastectomy breast reconstruction. He studied painting at OCA and then earned a BSc in medical illustration at the University of Toronto before entering medical school at McMaster University.

Dr. Semple’s painting was also featured on a silk scarf created in partnership with Dixon. The colourful scarf will be sold to raise funds for Women’s College Hospital Foundation, in support of women’s cancers. The scarves can be ordered online.

To read more about the Semple and Dixon collaboration, visit the Toronto Women’s Hospital site and Fashion magazine. 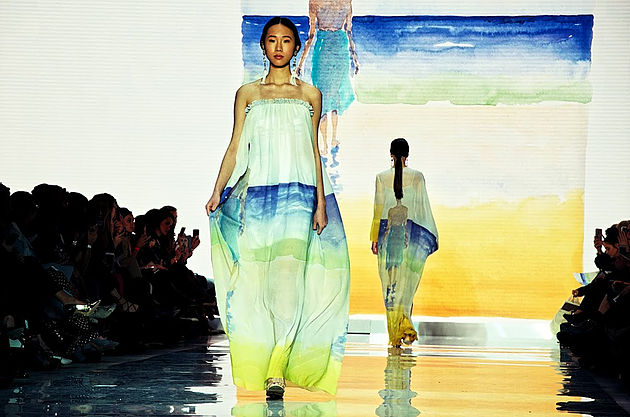 “The university benefits enormously from the varied expertise and exceptional leadership of our Board of Governors,” said Dr. Sara Diamond, President and Vice-Chancellor. “I thank Sharifa Khan and David Holland for their hard work in their roles, and of course Dr. Semple for his insightful guidance over the past two years.”

Watt has been deeply involved with equality and human rights issues, and has received numerous awards for his service to the community, including Out on Bay Street’s Leader to be Proud of Award and the inaugural recipient of Egale’s Lifetime Achievement Award for equality rights. He is a sought-after public affairs commentator who specializes in public strategy issues. Watt joined the board in 2015.

"I am so thrilled to have been elected as Board Chair at OCAD U, the largest and most comprehensive art, design and digital media university in Canada. Make no mistake, OCAD U’s time has come. Just watch how the Creative City Campus (CCC) project will revitalize and expand the institution’s core creative spaces on McCaul Street,” said Watt.

A complete list of members of the Board of Governors and their biographies is available online.

keywords:
Semple
board
Board of Governors
chair
Watt
galipeau
francis 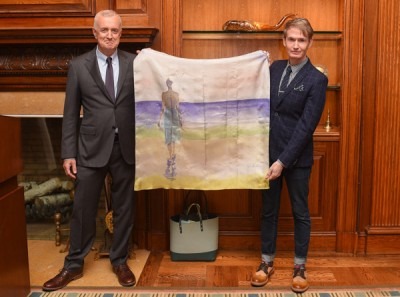 Dr. John Semple, world-renowned breast cancer surgeon and Chair, OCAD University Board of Governors, has collaborated with Canadian fashion designer David Dixon on a Women’s College Hospital Foundation fundraising initiative. Together, they have created an exquisite silk scarf featuring a watercolour painting by Dr. Semple that is now available for purchase.

Proceeds from the scarf will support the highest priority needs of Women’s College Hospital, including the new Peter Gilgan Centre for Women’s Cancers – an innovative new partnership between WCH and the Canadian Cancer Society with a vision to transform care for women’s cancers across Canada.

Dr. Semple, Professor, Department of Surgery at the University of Toronto, is a gifted artist who graduated from OCAD University prior to entering medical school. The painting depicted on the scarf was inspired by the extraordinary courage and resilience of women facing cancer – an inner strength that Dr. Semple has witnessed time and again throughout his career at Women’s College Hospital.

A quote from the philosopher Albert Camus helped guide Dr. Semple’s vision for the final design: “In the depth of winter I found there was, within me, an invincible summer.” Drawing on the quote’s tribute to the power of inner strength, Dr. Semple’s design shows a woman walking on a beach facing an open horizon, empowered by the “invincible summer” that resides within her.

Dixon also designed a beautiful collection of dresses based on Dr. Semple’s watercolour that was unveiled at the Foundation’s Women for Women’s gala luncheon on November 8.  A video depicting the extraordinary collaboration between David Dixon and Dr. John Semple can be viewed online.

OCAD University appoints Tony Belcourt and Dr. John Semple to Board of Governors

(Toronto—June 15, 2012) OCAD University has appointed Tony Belcourt, a leader in Canada's Métis and Aboriginal communities, and Dr. John Semple, Chair in Surgical Breast Cancer Research at Women's College Hospital and an alumnus of OCAD U, to its Board of Governors.

"On behalf of the Board of Governors, I welcome our new members into the OCAD University community," said Ian Tudhope, OCAD University Board of Governors Chair. "OCAD U's Aboriginal Education Council has already benefited for the last four years from Mr. Belcourt's wisdom and advice, and we look forward to working with him in this new capacity at the Board level. Dr. Semple's leadership in mobile health delivery, and his experience as an OCAD U alumnus, will no doubt greatly impact our many students and faculty already working with researchers across Ontario's health sector."

"Our new strategic plan renews OCAD U's commitment to developing the creativity of our students, graduates and faculty - uniquely equipped entrepreneurs and innovators who can address the world's significant challenges," said Dr. Sara Diamond, President of OCAD University. "Mr. Belcourt and Dr. Semple are exemplary leaders in their respective fields, and will share their insights and expertise in areas such as our Aboriginal Visual Culture program, and OCAD U's ongoing health and wellness research projects."

Mr. Belcourt and Dr. Semple will begin their three-year appointments this month.

A complete list of members of the Board of Governors and their biographies is available at http://www.ocadu.ca/.

Tony Belcourt
Over Tony Belcourt's distinguished career, he has established a strong reputation as a successful corporate leader, innovator, entrepreneur and communications specialist.

Mr. Belcourt has been one of the foremost business leaders and political figures within Canada's Métis community. A well-respected negotiator, Mr. Belcourt has played a key role in establishing a national voice for Canada's Métis and Non-Status Indians. His efforts were an important contributing factor in the Métis being recognized, in the Constitution Act in 1982, as one of the Aboriginal peoples of Canada. He has represented the Métis Nation in high-level talks at the United Nations and the Organization of American States and has made presentations to the World Bank, the Inter-American Development Bank, the World Summit on Information Society, the International Telecommunications Union and the World Conference Against Racism.

Mr. Belcourt is currently President of the Indigenous Commission for Communications Technologies in the Americas. He has been a member of OCAD University's Aboriginal Educational Council since its inception in 2008. In early 2008, Mr. Belcourt was appointed to the post of Métis Nation Ambassador for International Issues by the President of the Métis National Council. In 2006, Mr. Belcourt received a National Aboriginal Achievement Award for public service. Mr. Belcourt received an Honorary Doctor of Laws Degree from Lakehead University in 2010.

Dr. John Semple
As chief of surgery at Women's College Hospital, Dr. John Semple has been instrumental in establishing the hospital as home to one of the country's top centres for breast restoration. He put Women's College on the map as a leading centre for breast reconstruction some years ago by developing and pioneering new surgical techniques in breast restoration. Previously, as director of the Advanced Regenerative Tissue Engineering Centre at the University of Toronto and Sunnybrook Health Sciences Centre, Dr. Semple led a group of scientists, engineers and surgeons in producing new technologies for soft tissue regeneration and reconstruction following cancer surgery. He is a professor in the department of surgery at the University of Toronto and former president of the Canadian Society of Plastic Surgeons.

In March 2010, Dr. Semple was named chair in surgical breast cancer research by the Canadian Breast Cancer Foundation - Ontario Region. The chair is based at Women's College and was the first endowed chair in the hospital's department of surgery. Dr. Semple's appointment, Women's College's first such appointment in surgical breast cancer research, placed him as a core scientist at Women's College Research Institute (WCRI). He and his team explore improvements in reconstructive surgery techniques including the use of autotransplantation of a patient's own lymph nodes to treat and prevent the formation of lymphedema - a painful side-effect of breast cancer treatment that can cause severe swelling in the arm. Dr. Semple graduated from OCAD University in 1975.

Media are invited to attend. To RSVP or for more information, please contact: