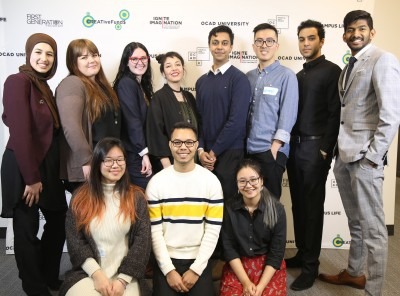 On Tuesday, March 12, OCAD University’s most outstanding student leaders for the academic year 2018/19 were celebrated at our annual Student Recognition awards dinner.

Coordinated by OCAD U's Campus Life office and generously hosted in the Centre for Emerging Artists & Designers (CEAD) in their new space on the third floor of the Experiential Learning Centre in the Rosalie Sharp Pavilion, the dinner was catered by Pow Wow Café with Indigenous inspired cuisine. The dinner honoured the contributions of the university’s peer mentors, student groups and other student leaders for excellence in diversity and equity, as student employees, and Indigenous student leadership.

Additionally, awards selected through a nominations process were given out for several categories.

Ahmad was recognized for his strong leadership skills and dedication to the MSA, where he has demonstrated professionalism in coordinating regular meetings with best practices like using agendas contributed to by the team. He contributed to rewriting the MSA’s constitution, coordinated various fundraisers and potlucks, and Islamophobia and bystander intervention workshops, and is noted for his patience and willingness to work with others.

Salisa was recognized forher timely and effective communications, for being open to and encouraging, face-to-face meetings, for her genuine interest in getting to know mentees personally, for demonstrating knowledge and insight on curriculum, and for highlighting the benefits of community involvement as a resource leading to success.

Roshan was recognized for his patient, inclusive approach, and the wealth of knowledge and insight he shared as a mentor. He was also recognized for his caring and encouraging nature, his initiative to help mentees navigate the university, its systems and programs, and off-campus community resources.

Nora was honoured for her work as a Peer Health Educator in OCAD U’s Health & Wellness Centre (HWC), where she has been involved in the Centre’s Cooking and Journaling Clubs. She has also contributed to OCAD Student Union’s Hot Lunch, where she promotes equitable access to nutritious meals, inclusive of gluten-free and vegan options. She has also held active roles with outreach events such as Willows for Wellness and the peer thesis Midnight Project. Nora consistently promotes inclusion and well-being, working towards equity and advocating for marginalized communities. Her work as a board member on the MSA included coordinating a campus workshop on Islamophobia and bystander intervention. She is dedicated to identifying barriers of inclusion and advocates for ways to make OCAD U programming more inclusive and welcoming for Muslim students and students with physical disabilities.

The award was presented to Nora by Gino Marocco and Roshan Thiruchelvam of the Student Union, with Victoria Ho from OCAD U’s Office of Diversity, Equity & Sustainability Initiatives.

Megan was honoured for their contributions as a core member of the Indigenous Students Association and deep involvement, commitment and engagement in Indigenous student event planning, community building and advocacy. Megan has contributed an immense amount of time, labour and love into the community at OCAD U, which is reflected in the many events, shows, student feasts and socials, both on and off of campus, that they have taken part in and/or organized. Megan has participated in, and/or co-organized and co-facilitated Indigenous student exhibitions (Primitive, 2016, Arrive, 2017, and Flux Refusal 2018) as well as student social events such as Creative Native Nights, Halloween parties and end of semester feasts. They have also worked as a Student Monitor at the Indigenous Student Centre, where they go above and beyond to assist with the daily upkeep of the centre, as well as supporting their peers.

Setayesh has been employed as a student monitor in various areas (Admissions, Onsite Gallery, Student Union) where she demonstrated strong dedication, commitment, professionalism and high quality work. Her imaginative creativity and ease with collaboration across disciplines have contributed to the efficiency and effectiveness of OCAD U operations and services. Her positive and enthusiastic persona, demeanor, and high level of inclusivity and respect help create a safe, friendly and encouraging environment. She is noted as a tremendous role model who embodies OCAD U’s fundamental values and themes.

Danielle is high-spirited, warm and dedicated. Approachable and knowledgeable, Danielle brings a strong sense of pride and leadership to her work and campus involvement. She has held an active position at Ignite Gallery for three years, mentoring and supporting other student monitors. She has provided support for the Drawing & Painting program Chair and student representative for Drawing & Painting Thesis. She speaks eloquently to the benefits of attending OCAD U. As Career Ambassador in the CEAD and peer mentor, she supports the success of her peers, makes connections, and supports the skill development of her classmates. Danielle’s positive attitude creates a safe space for diversity, wellness and cross-disciplinary collaboration.

Nora Bahgat and Joel Lee - Excellence in Student Leadership Awards
Finally, this new award recognizes the outstanding contributions of student leaders across the university in a variety of contexts, including (but not limited to) representing student perspectives in positions on OCAD U committees, working groups, task forces, governance bodies (such as the Senate or Board of Governors), or through publications, advocacy groups or the Student Union. President Diamond and Deanne Fisher, Vice-Provost, Students & International awarded the final awards of the evening to Nora Bahgat and Joel Lee.

Nora was honoured for her work for her active roles as a Peer Health Educator in the HWC, the Student Union’s Hot Lunch program, her involvement in the Willows for Wellness event, her commitments as a board member for the Muslim Students Association, and her approaches to advocating for marginalized communities.

Joel is noted for his deep belief in reciprocity and commitment to sharing knowledge, contributing towards his strengths as a student leader and community member. He is involved in variety of projects, programs and services on campus. As a student monitor, he is involved in a cross-disciplinary collaboration with Writing & Learning Centre, and Editor-in-Chief of NEST literary journal, a Writing Across the Curriculum initiative. He was also a Student Career Ambassador in the CEAD, where he was instrumental in providing a student’s perspective in the creation of new tools and resources for experiential learning projects and the new Work/Place program. His dedication to advancement and community galvanizes his peers to connect and take advantage of opportunities across campus and beyond.

The event would not be possible without the generous financial support of the Alumni Association, Alumni Relations, Financial Aid & Awards, the Indigenous Student Centre, the Centre for Emerging Artists & Designers, the OCAD Student Union, the Imagination Catalyst, and the offices of the President, the Vice-President, Academic & Provost, and the Vice-Provost, Students & International.

Watch for the 2019/20 academic year student recognition nominations period to open in the new year 2020, and consider nominating a student you know for these important accolades.

Student leaders recognized for contributions to OCAD U

The Diversity & Equity Excellence Award for Students, supported by OCAD Student Union and Office of the Vice-Provost, Students & International, acknowledges an outstanding student whose advocacy and leadership, promoting and advancing human rights, equity and social justice.

This year’s recipient, Meghana Ravi, co-led The Kaleidoscope Project, a multi-part arts-based participatory research project that included community consultations, an interactive public arts installation, and a full-length documentary that reflected the experiences and stories of OCAD U’s international student community. “Meghana is an exemplary student leader who uses her expertise in visual communication to engage in community building, education, and advocacy on issues of race and ethno-cultural identity, the international student experience, and decolonizing design,” said Sharmina Chherawala, Programs, Outreach & Human Rights Advisor in the Office of Diversity, Equity and Sustainability Initiatives.

As an advocacy initiative, The Kaleidscope Project amplified the voices of equity-seeking communities on campus and situated all participants as experts and educators in sharing their critical analysis and lived experiences. “Meghana’s project helped build a stronger international student community on campus, and was highlighted in Now Magazine, showcasing how OCAD U community members are advancing decolonization in the curriculum and beyond. The highly anticipated documentary screening and panel discussions premiered to a packed house of students, faculty, staff, senior leadership and community members,” explained Chherawala.

Peer Mentor Awards, supported by First Generation Programs, acknowledge Peer Mentors who have made outstanding contributions to the Student Mentor Program over the past program year. This year’s recipients, Daniel Lugo Travieso and Matt McCleery, have both demonstrated an inclusive approach in sharing their wealth of knowledge and insights. They have taken initiative to help other students navigate the university, it’s systems and programs and off-campus resources, and exercised patience when responding to questions. Their commitment to keeping in touch with their mentees, and to help students connect with each other and opportunities have helped build our student community. An honourary mention was given to Becky Wu.

Special Commitment Pins were presented to Peer Mentors who have shown commitment to the Student Mentor Program. For the first time ever, a four-year pin was presented to Arashdeep Chahal, while three-year commitment pins were given to Elisabeth Chan, Jacqueline Lee and Adria Maynard.

The Student Group Leader of the Year Award, made possible by Imagination Catalyst, is presented to a student leader of a group who excels, above and beyond in their leadership role. This year it was awarded to The Grind’s Russell Chiu. The Grind is an incubator for students who want to start their own small business, with goals to encourage networking and collaboration between students, provide workshops, guest speakers, and resources to assist in the development of new skills and portfolio building.

“Our student group leaders embody the entrepreneurial qualities of creativity, innovation, risk-taking and independence,” said Ahmed ElBedaway of the Imagination Catalyst. “Russell works consistently on bringing The Grind team together to curate a variety of inclusive entrepreneurship and creative business events on campus through encouraging open-floor discussion of ideas, while ensuring the core team members are on the right path of growing the group, supporting personal growth of each individual member, and making sure that he is able to help others achieve their goals as well as his own.”

Deanne Fisher, Vice-Provost, Students & International, acknowledged the commitment and leadership of OCAD Student Union executive and student participants in Board of Governors and OCAD U Senate. 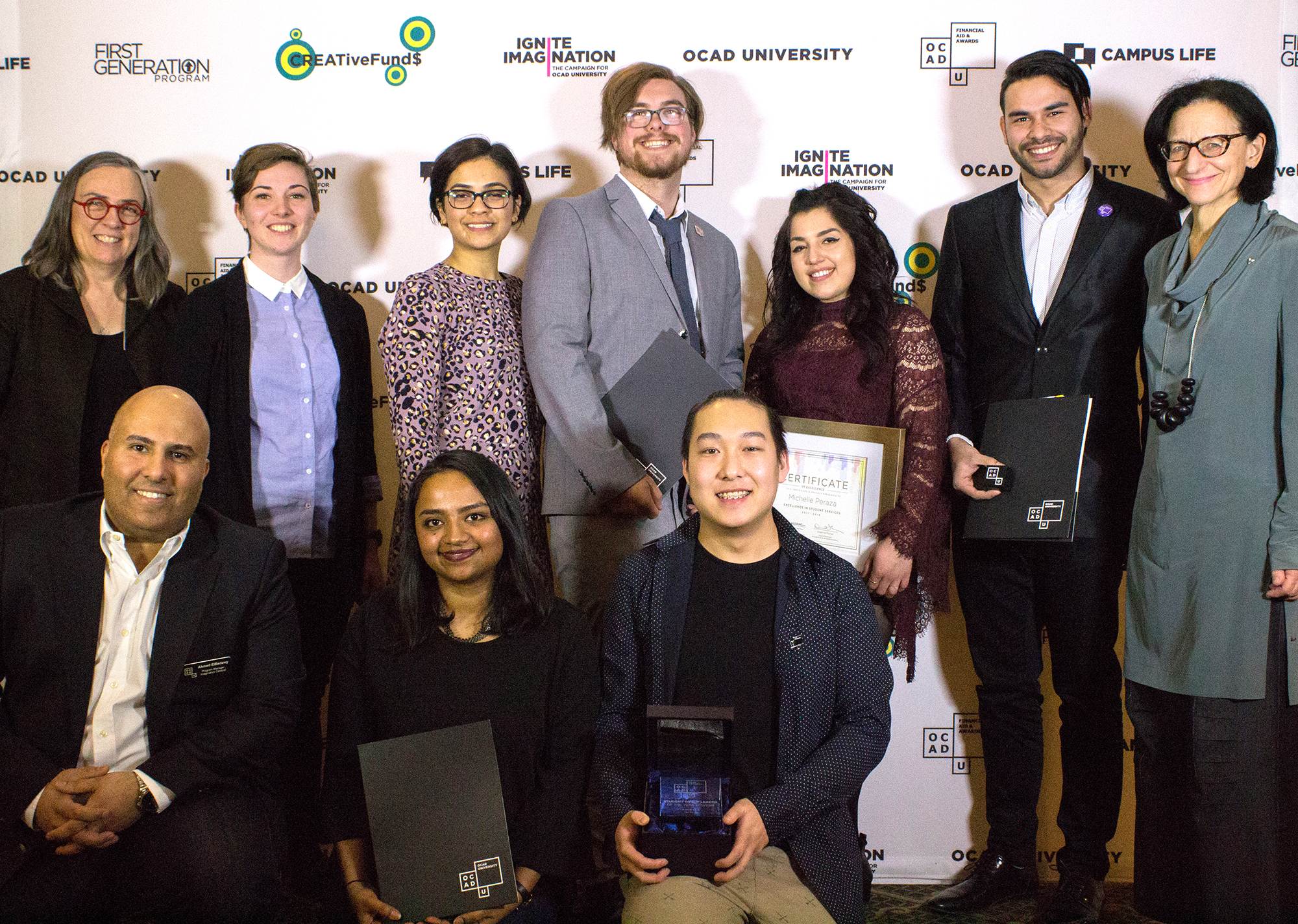