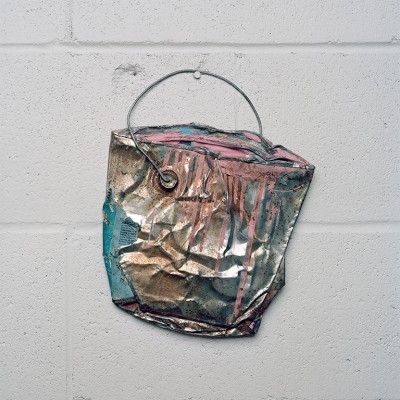 ANGELL GALLERY is pleased to present 'New Works', a solo exhibition by photo-based artist Alex Kisilevich. The exhibition runs in the west gallery and the project room from June 13 to July 5, 2014. An opening reception will be held on Friday, June 13, 6:00 to 9:00 PM.

The photographs of Alex Kisilevich abound in clever reconfigurings of everyday objects to produce new and often absurd meanings. Playfully blending medium and materiality, in his latest work Kisilevich extends his photographic practice, exploring the ideas of photograph as painting, photograph as sculpture and photograph as video.

Kisilevich reveals the beautiful and the quirky in the mundane. Carpet under padding, used in previous works as a backdrop, moves to the foreground in a series of photographs that reveal the painterly quality of this literally downtrodden material. From a distance the series appears to be painting on canvas, and this confounding of boundaries is a thread that runs throughout the exhibition. A photo-sculpture "sits" on a gallery bench. An electrical receptacle in the gallery's wall becomes part of a photograph. These strange behaviors recall the dark humour of that most philosophical of surrealists, René Magritte.

In a new video work, Kisilevich uses the simplest of means and materials to achieve startlingly poetic results. What appears to be a still photograph of a swath of radiant material slowly comes to life as an unseen current activates the subject, causing it to "breath" and change colour and texture, like a chameleon.

In another video, Walker, the protagonist is a medical aide, a class of objects Kisilevich calls upon to evoke the vulnerable body. An abandoned walker, shimmering in its own prepared costume, performs a solo dance with all the grace its ungainly form can muster. The music, Saint Saens's The Swan, is performed on a theremin, adding an anachronistic element to the strangely touching proceedings. In Kisilevich's world, absurd is beautiful.

Alex Kisilevich has an MFA in Visual arts from York University and BFAs in Music (York University) and Photographic Arts (OCAD). He was the 2009 national winner of the BMO 1'st Art Invitational, and his work has been featured in publications such as Magenta Foundation's Flash Forward, BlackFlash Magazine and Canadian Art. He has had solo exhibitions at Harbourfront Centre, Angell Gallery, Lianzhou in China, and has been in group shows in Boston, Portland, London (UK), and Kiyosato in Japan.