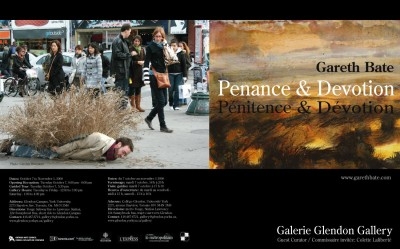 How Do You Cope With Environmental Guilt?
Would You Crawl Along The Street With A Field On Your Back In Penance?
In November 2007, OCAD alumnus Gareth Bate crawled along Toronto's Queen Street West from Soho Street to Spadina Avenue with a field of grass on his back. It was painful and tiring. This bizarre act of self-punishment and humiliation for the guilt of environmental destruction has been captured in the performance video Penance. The exhibition also features Bate's large-scale paintings. His Lament series deals with a sense of personal sorrow, loss and hope in relation to the destruction of the natural world.

Biography:
Gareth Bate graduated from the Ontario College of Art & Design in 2007. He is the winner of the 401 Richmond Career-Launcher Prize, a 500 square foot studio given to one OCAD BFA graduate every year. He has won several awards for painting and art writing, and received an Ontario Arts Council Grant. He has shown at a number of Toronto galleries including Loop, Bau-Xi, Gallery 44, Gladstone Hotel and exhibited in Nuit Blanche.

Acknowledgements:
The artist would like to thank guest curator Colette Laliberté for all guidance and support. Glendon Gallery would like to thank its media partners: L'Express & Le Métropolitain newspapers, Radio-Canada TV & radio CJBC 860 AM, Première Chaîne and Clic Toronto. Special thanks go out to the Advising Committee: Marc Audette, Nadine Bariteau, Omid Fekri, Anna Husdon and Colette Laliberté.

All are invited to this exhibition by OCAD alum Doug Martin.

CONCURRENCE at Nuit Blanche 2008 will transform one of Toronto's hidden community gems into a multi-sensory exhibition. You will have the opportunity to see painting, sculpture, installation, film, dance and live music performances by Canada's emerging talent. Experience the meeting of cultures in a fusion of sights, sounds and flavors - all in the celebration of creativity. Our artists will amaze and surprise with their collective story. 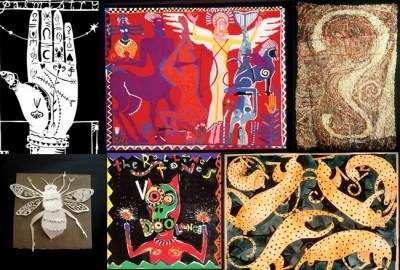 Whether designing her own fonts or handmade sweaters and carpets, illustrating children’s books or Jazz Festival posters, creating an embroidered book for the Dalai Lama or a Rolling Stones T-shirt, Barbara Klunder has explored and mastered many artistic categories with ease.

The FCP Gallery is located on the street level in the retail area of the First Canadian Place Complex.
FCP Gallery viewing hours are 11:00 am - 3:00 pm

We regret to inform you... 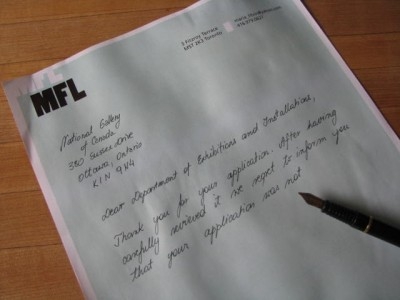 Rejection letters in an artist's life are a symbol of the complicated relationship post-industrial capitalism has with art. The complication results in a clash of two fundamental concepts with the Western world: the notion of individuality and freedom of expression versus the market and its ability to determine value. 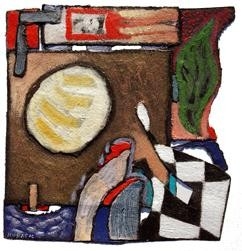 Hand-torn pieces of tar paper, shaped and painted, find their way into woven collages, each a random arrangement, telling a story or prompting an image. Each one offers a filigree of colour, texture and structure, combining representation with abstraction. For alumnus Joseph Muscat they become a throwback to childhood memories of broken treasures restored, a parody on dreams waiting to be realized, and a metaphor of current events of matters on life and death.

Elizabeth Russ, a graduate of OCAD, presents an exhibition of works by 38 members of the Café Society in her gallery, Gallery 888. 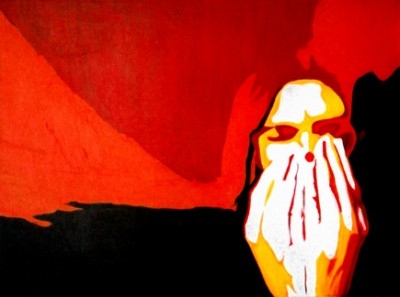 The importance of silence is best summarized by the African proverb, "Much silence makes a mighty noise." On the activity of silence, the Zen Masters say, "In that which speaks in silence, nothing is left out."

When we find ourselves in solitude we feel familiar and at home. One is no longer isolated by the verbal chatter of others, which feeds and organizes our daily lives, keeping the silence at bay. The best information in our Information Age is no information at all. Silence tells all. It is the gentle inner peace of the here and now. It is a mystery.

Working Title explores the ways in which these artists deal with the matter of painting. The elements with which the paintings are composed - including the size and direction of the brush marks, the visible layers of colour, the viscosity of the paint, the negotiation of the edges and the idiosyncrasies of format – are the subject of the work.

Spath’s paintings are a temporary and intuitive response to the site: the site being the space where they are exhibited. She uses standard sized vellum to create a composition in the space.