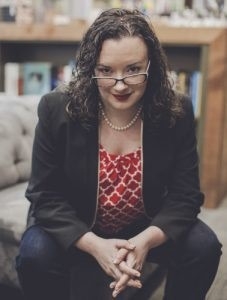 "I'm proud to announce that my latest novel, COMPANY TOWN, which is one big long science fiction prototype about the future of urban life after the oil bubble pops (and also a post-human serial-killer, and augmented reality, and the implications of CRISPR), has been selected as a finalist for CBC Books' 2017 Canada Reads competition.”

What is the one book Canadians need now? That's the question at the heart of the next edition of Canada Reads, which will take place from March 27 to 30, 2017. Ali Hassan, from CBC's Laugh Out Loud, will host the show for the first time.

"As part of the media process, I've gotten a lot of questions about my work as a foresight consultant, and the training I received in the SFI programme. I'm filming more today, and doing an event with the CEO of Chapters/Indigo, so we'll see how many times I can explain what foresight is in a single day."--Madeline Ashby

Madeline Ashby is a science fiction writer, futurist, speaker, and immigrant living in Toronto. She writes a column for the Ottawa Citizen. She is represented by Anne McDermid & Associates, and Jason Richman at UTA. You can buy her books here.

She has worked with Intel Labs, the Institute for the Future, SciFutures, Nesta, Data & Society, The Atlantic Council, the ASU Center for Science and the Imagination, and others. Her short fiction has appeared in Nature, FLURB, Tesseracts, Imaginarium, and Escape Pod. Her other essays and criticism have appeared at BoingBoing, io9, WorldChanging, Creators Project, Arcfinity, Tor.com, MISC Magazine, FutureNow, and elsewhere.

What do you enjoy most about your work?

What I enjoy the most is, with technology and design, I’m building applications that will be used by thousands and millions of people and will make their everyday life easier and happier.

What is the most challenging aspect of your work?

To be honest, I think the most challenging aspect is people. You need to empathize your users. Empathize how they feel and think and why they behave in certain ways. You need to understand your clients. Understand their needs and goals and how to best communicate with them. You need to know your team. Know how to efficiently and effectively work with cross functional teams.

What do you enjoy most about your work? What is the most challenging aspect of your work?

Writing is what I enjoy most, and writing is also the most challenging. Sometimes I spend hours on one or two sentences. For the most part, I still have to fact-check and edit my own work. I love studio visits, especially when they feed into a collaborative or experimental piece. I learn a lot from the artists I work with. The most challenging aspect of my work is maintaining momentum, especially when other parts of life creep in to demand my time and attention.

What skills or relationships developed at OCAD U helped you participate in your field? Is there anything you would have done differently?

Aside from my exposure to art theories and theorists, the most important thing that I learned at OCAD U came out of critiques. We were taught in the Sculpture/Installation program to really look at art. We had to describe what we saw, formally, without any personal baggage or interpretation before we were allowed to get into anything subjective. As for relationships, I left OCAD U with a few friends for life, including several of my instructors.

What were your policies regarding internships, volunteering, and paid work?

I’ve only worked for free when it meant building something from nothing. So, for example, I would never work for free for a large design agency (and now, owning my own agency, I would never ask someone to work for free). However, I have in the past collaborated with friends to work on events and projects that would likely not yield any profit.

What skills or relationships developed at OCAD U helped you participate in your field?

I think OCAD taught me to think critically about design in a way that I wouldn’t have gotten elsewhere. I had a handful of really influential courses and teachers that I wouldn’t trade for the world. I was often a voice of dissent in my program and pushed to do things that I weren’t part of my program. I wouldn’t change that, though, because my whole business now is built around challenging authority and the status quo!

What skills or relationships developed at OCAD U helped you participate in your field? Is there anything you would have done differently?

The emphasis on theory and critical dialogue at OCAD U has really influenced the way I approach my work. I'm always reading and this helps me contextualize the things I make, whether they are an object or an event, within a discourse of material culture and changing approaches to production.

Working with Kate Hartman, and the team at the Social Body Lab has really influenced the way I think and work as well. The lab is always focused on how people relate to technologies, which has helped me internalize human centred design methods. The work I was involved in at the Social Body Lab has always been interesting and challenging. I worked on a project to develop fashionable cycling lights, along with fashion designer Angella Mackey. The project is called Vega Edge, and we went on to raise $34 000 on Kickstarter, and produced all the lights in Toronto and shipped them around the world.

If I could have done anything differently, I would have collaborated more with other students at OCAD U during my time there.

I believe that I'm still in the beginning of my career, so it's a bit difficult to pinpoint where it began and how it got started. Everything I've ever done has played a crucial role in the creation of where I am now, as a person and an artist. The entire process felt (and still feels like) a huge whirlwind of trials, errors and risk-taking decisions.

I will say that at OCAD U, I developed the drive to work extremely hard to create the life that I wanted for myself. I spent endless hours in the studio developing my work and establishing the relationships with people that would sustain and support me throughout my career. OCAD U was a launchpad that helped me to make important connections with artists and gallerists.

I got into motion design while I was in my third year.  I found myself more comfortable trying to lay ideas on storyboard than anywhere else. Designing on screens felt less restrictive with endless possibilities. The added dimension of designing with time was very interesting because I was able to play around with more dimension.

Around that time I met a few directors from CTV who came to our motion graphics class to do presentation. I kept in contact with them for around 2 years sending portfolio and resume, after which I was able to get a foot in the door as a freelancer post graduation.

Why did you choose to attend OCAD U?

I found myself drawn to OCADU because of it’s creative and almost electric atmosphere. All the other facilities that I toured seemed mired in tradition and the status quo but at OCAD U I felt that there was a feeling of people trying to drive for more, and to push the boundaries of art, design and themselves to do things in new and better ways. How can you resist something like that? It is still a feeling that draws me to OCAD

I am currently working as an arts instructor as well as a practicing artist while I grear myself up for my masters program in London, England at Central Saint Martins.

What do you enjoy most about your work? What is the most challenging aspect of your work?

I work pretty slowly. I think about everything constantly. I have folders of images I find online. I spend way too much time on Pinterest. Deadlines are really helpful for me. I start really ambitious projects and always think I can do them on my own, but invariably I need a second pair of eyes. Being in school again right now is exactly where I need to be. I am experimenting with new things I have never done before due to the excellent facilities at Concordia. The last photo I made was in the Winter, and it was roughly 6ft tall by 23ft long. It took a lot of me to do, so I haven’t taken a photo since, but that to me is sort of liberating.

Currently I’m working on a number of very hands-on sculptural projects. They are related to the photos I’ve already made - still the same ideas - just different ways of dealing with them.

What are the key responsibilities you maintain for your practice?

My main responsibilities include making sure everyone has what they need. Firstly I have to make sure I am making good work, and that the printer gets it in time to deliver to the framer.  If I'm doing an interview or commission I have to make sure that party is getting my full attention and that emails are answered promptly.  There are certainly obvious tools like software and hardware that I need, but anything that I'm unfamiliar with I can usually learn about through the internet.  Networking is essential to build relationships with other artists, curators and collectors. It's one of my favorite parts of the job!