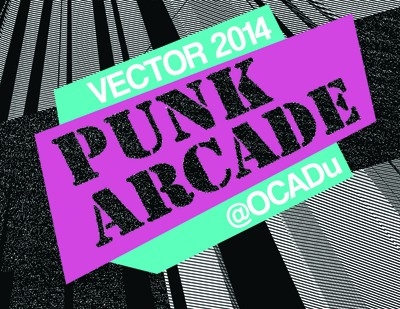 Join us on Thursday, Feb 20, for the official opening reception of the 2014 Vector Game + Art Convergence Festival! This evening will feature introductions by Team Vector, the exhibition curators, and members of the local indie game and art communities as well as OCAD U. We invite you to meet our artists, chat with game makers and critics, and get to know the festival curators and workshop leaders. Play some games, have a drink and a snack, and learn more about the festival and its programming!

Vector’s first cross-border curatorial collaboration will see Team Vector and the curators of Punk Arcade (Sarah Brin and Lee Tusman) join forces to bring you the Vector X Punk Arcade at 49 McCaul Street. Sponsored by OCAD University’s Digital Futures Initiative, Team Vector and the Punk Arcade curators have selected works that fit with the edgy, fun, DIY ethos of previous Punk Arcade incarnations. We are very excited to bring Lee and Sarah to Toronto and share their curatorial vision of games and game art at this year’s Vector festival!

Continuing Sarah and Lee’s previous curatorial work, the Vector X Punk Arcade presents independent, offbeat, gritty art games that have been constructed rapidly and outside the triple-A world of mainstream videogaming. Many of these game experiments are made by artists who game designer Anna Anthropy has called “video game zinesters,” who benefit from easy, open access to game-making software tools, and who are driving a radical paradigm shift for the independent, often collaborative creation and free distribution of games at the intersection of popular videogaming and contemporary art.

Punk Arcade began as an exhibition at Philadelphia’s Little Berlin Gallery, and has since reached on- and offline audiences of more than 100,000. Sarah Brin is an art historian and curator who has collaborated with SFMOMA, MOCA, The Armand Hammer Museum, and Vice Magazine’s The Creators Project, among others. Lee Tusman has curated dozens of exhibitions and public projects at sites including Riverside Art Museum, California State University, Northridge, University of California, Riverside, and Division 9 Gallery.

The Vector Game + Art Convergence Festival is a participative, not-for-profit, community-oriented initiative dedicated to showcasing contemporary game-based artworks. This year, the second annual festival will run at multiple venues throughout Toronto. It will feature three exhibitions, two screenings, as well as multiple live performances, workshops and panel discussions. All our events are designed to encourage a critical dialogue around the medium of games and its expressive potential as a contemporary art practice. The Vector Game + Art Convergence Festival acknowledges support from the Toronto Arts Council and the Ontario Arts Council.