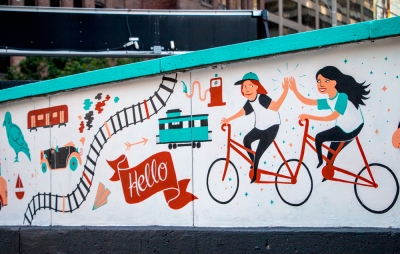 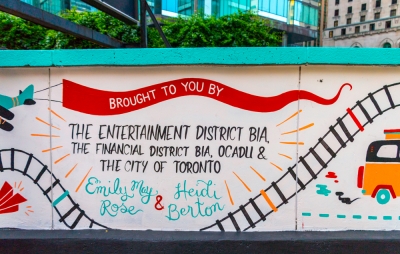 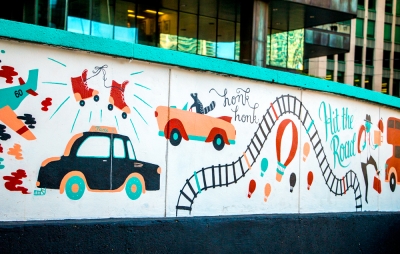 The Toronto Entertainment District Business Improvement Area (TOED BIA) and the Toronto Financial District BIA unveiled a multi-colored mural as a shared contribution to the aesthetic improvements to the retaining wall at the University triangle (University Avenue, Front Street and York Street). The mural spans over 470 square feet from the Front Street West base of the triangle.

With a commitment to maintain this triangle, the BIAs were faced with the challenge of combating a constantly tagged wall. The solution was to partner with OCAD University to commission two artists. Mural preparations commenced on June 15th under the skillful execution of Toronto based artists Heidi Berton and Emily May Rose.  Both are graduates of OCAD U’s Illustration program. The two muralists were selected through a juried process and are part of an ongoing collaboration between OCAD U and TOED BIA.  Dr. Sara Diamond, President, OCAD University, comments further by saying “We are excited to be working with the BIAs on this project together - this is a wonderful example of how the business community can work together to improve the public realm.”

Together, Emily May Rose and Heidi Berton have created mural art with humour and vibrant colours to brighten busy commuter mornings. The mural’s colour palette is bright and whimsical, strengthening a sense of the area’s hustle and bustle, as it is depicted throughout the mural’s design. For artist, Emily May Rose “Our concept was to take the idea of the train station being the hub of activity in the Front and University area by creating a motif of city transportation imagery, centred around a train track running throughout. Because the tracks have been a constant in the lives of Torontonians and commuters for many years, we wanted to show the evolution of how people continue to get around while the train tracks remain a staple.”

Councillor McConnell of Ward 28, states that “…We are pleased to see the ongoing beautification of a key entry point to two of Toronto’s most popular destinations: The Entertainment District and the Financial District. The City of Toronto is very thankful to have our BIAs working together in maintaining and beautifying this important parkette.”

Councillor Cressy of Ward 20, commented further by saying “…such a joint project as this is a prime example of bringing public art to this vibrant and busy area of Toronto while providing a fantastic opportunity for OCAD artists to showcase their talent.”

About OCAD University
OCAD University is Canada’s university of the imagination. Founded in 1876, the University is dedicated to art and design education, practice and research and to knowledge and invention across a wide range of disciplines.

About Toronto Financial District BIA
The Toronto Financial District BIA represents Toronto's premier business centre, an area that includes Union Station, the PATH underground walkway and Canada' s five major banks and most prominent firms. With a mandate to promote economic development in the area, initiatives include improving public spaces, showcasing the daily activity of our thriving businesses at www.MyTOFD.com and @MyTOFD, and identifying collaborative opportunities that ensure the Financial District and PATH are well-maintained, integrated, connected and accessible.

About the Toronto Entertainment District Business Improvement Area  Established in 2008, TOED's mandate is to promote, improve and preserve a dynamic area of Toronto. Benefitting from economic, environmental and social factors driving downtown growth, the Entertainment District is in the midst of a renaissance, firmly establishing itself as a thriving and vibrant district for living, creating, working and entertainment. From Air Canada Centre to the Four Seasons Centre for the Performing Arts, the Entertainment District includes many of Toronto's most iconic buildings. In the heart of the District is the CN Tower, Steam Whistle Brewing, Ripley's Aquarium of Canada, Metro Toronto Convention Centre, MetroCentre, Rogers Centre, Roy Thomson Hall, Princess of Wales Theatre, Royal Alexandra Theatre and TIFF Bell Lightbox (www.torontoed.com).