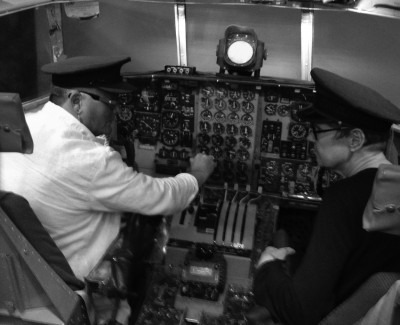 In the Gallery 1313 Process Gallery exhibit, ARTIFACTS explores in ARTIFACTS ARTEFACTS detritus-as-performance. Our original intention was to gather over 30 years of performance detritus into a retrospective; this though has not been the case.

The idea of performance detritus remains but is now reconfigured. In the process of exploring performative ideas around the military, we went to The National Air Force Museum of Canada where we surreptitiously donned military uniforms on display and photographed each other in situ – posed and in the various aircraft on exhibit. This was an informal performance where we acted on the edge, delightfully fearful of being discovered.

After a performance, we usually have photo-documentation by a photographer which then can be exhibited. Here though we lacked such a photographic witness.

In preparing for the Gallery 1313 exhibit, we found ourselves caught up yet again in this performative “militaristic” action and we began to purposely and playfully generate objects and images. In the process of doing so, we realized we were making an ironic comment on the historic value of artefacts and indirectly on ourselves as older disabled women artists.

The exhibit responds to contemporary “hipster” nostalgia:  the “authentic” consumer item, the aura of the “working” uniform, and, in addition, the absurdity of aged women with disabilities as military generals!  Focused around gilt-framed photo portraits of each of us in WWII military dress attire and in action in the cockpits of aircraft, the exhibit uses over a hundred cardboard model planes, and over a thousand cards which speak to our authenticity. A written text backstory is provided (all fictitious but immeasurably seductive) as part of the exhibit to provide context and embed it (us) ever deeper into the idea of the contemporary seductive artefact. 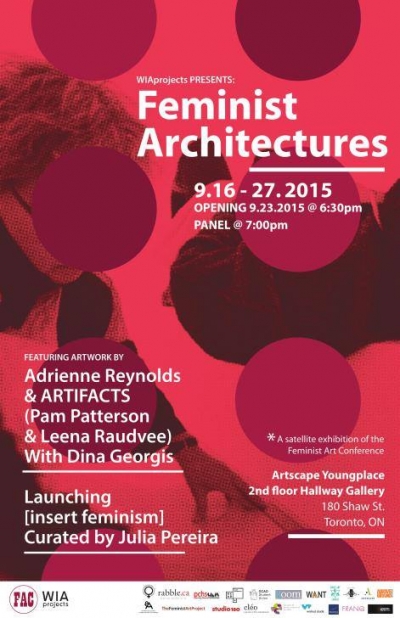 Wall works by New York artist Adrienne Reynolds and Toronto-based ARTIFACTS (Pam Patterson & Leena Raudvee) explore imagery which defines how, and engages with, the limitations and potentials of feminist theoretical and architectural space. They articulate imagery through vectors of activity and/or, as bodies contained by/in structures. The work is critiqued and reframed by academic and cultural critic Dina Georgis.