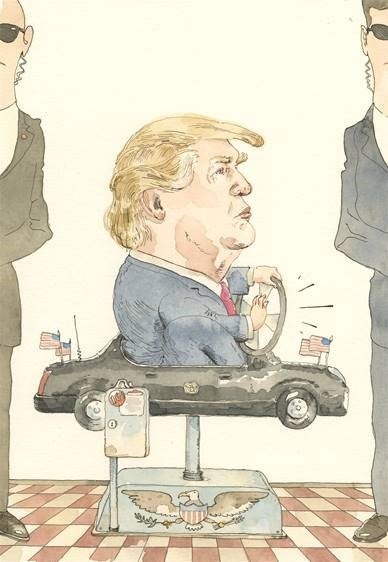 Wearing his signature green fedora, illustrator Barry Blitt spoke to a packed auditorium of guests, students and faculty at the President’s Speakers Series talk on February 28.

The semi-autobiographical presentation included more than seventy images, capturing his process and evolution as an illustrator, and the challenges of working on breaking news stories for national publications.

Especially well-known for his covers of the New Yorker, Blitt’s style is instantly recognizable; a loose, pen and watercolour technique that would be as well-suited for 1928 as for 2018. President Trump has been a frequent subject for the past several years, someone Blitt considers a gift to satirists.

The humourous, self-deprecating talk concluded with a Q&A session with the audience. Students from the Illustration program quizzed him on how to start a career in the field, and others inquired about how he tackles difficult political subjects. The questions continued well past the allotted time, so Blitt returned the following day to speak with Illustration students.

Barry Blitt graduated from OCA in 1982, moving to the US a few years later. He has since become a US citizen and lives in Connecticut.

The Illustrative Wit of Barry Blitt 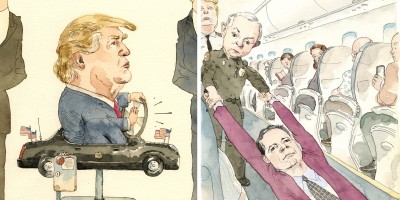 Join us at OCAD University for a timely and entertaining lecture by illustrator and OCAD U alumnus Barry Blitt.

Blitt has created more than 80 covers for The New Yorker magazine, as well as numerous other illustrations for the publication. His work has also appeared in Vanity Fair, Time, Rolling Stone, and The Atlantic. Blitt has been honoured with exhibitions and awards from the Society of Illustrators, Print, and American Illustration, and is a member of the Art Directors Club Hall of Fame.

This President's Speaker Series talk is sponsored by the late Honey and Barry Sherman.

Please arrive early as seating will be limited.