Chris was chief photographer and editor-at-large at British magazine Wallpaper. In Canada, he has contributed to major fashion magazines including Flare, Fashion and Elle Canada. His clients have included Holt Renfrew, BMW, Abercrombie & Fitch, the Gap and Target.

Chris’ photos have appeared in magazines such as Fast Company, Travel & Leisure, Out and The Advocate. He’s been recognized by the Art Directors Club of Canada and the National Magazine Awards.

Here are the stories behind his five favourite photos:

This is one of my favourite shots, for Toronto designer Izzy Camilleri for her 2006 campaign…a dress made out of chain with a leather sleeve. I drew on Blade Runner as inspiration for this shoot.

I was very happy with the simplicity and understated creepiness I was able to evoke with the set I designed for my portrait of David Cronenberg for the Director's Guild of Canada. He was also very easygoing and a nice guy.

Getting to photograph Kathy Griffin in Los Angeles was a blast. This is an example where I found someone I wanted to shoot, pitched it to the client, and then produced, art directed and executed the result from start to finish.

Shooting Canadian astronaut and fellow Star Trek groupie Chris Hadfield brought out my inner geek. I designed and printed this T-shirt for him to wear at our shoot in the hopes he would appreciate the message. Happily he did.

This is part of a series I did that Holt Renfrew commissioned for a charity fundraising event. We shot vintage and new couture fashion in my studio while it was still being renovated, and had fun mixing eras and moods. I've always loved this image of my friend Mella for its glamour and stylistic nod to Avedon and Penn. 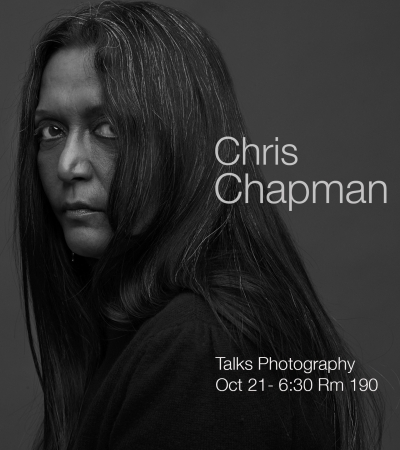 Chris Chapman is an internationally renowned photographer who has chosen to make his home in Toronto, Canada. Chris was instrumental in the visual attitude and success of the British publication Wallpaper magazine from its inception in 1996, serving as its chief photographer as well as editor-at-large for over three years. Here in Canada, he has been a contributor to all of Canada’s major fashion magazines including Flare, Fashion and Elle Canada. His clients at home have included several major luxury retailers like Holt Renfrew and Harry Rosen as well as Birks, Roots . BMW, Joe Fresh, Hudson’s Bay, Nienkamper, and Club Monaco. Abroad, Chris has shot for Abercrombie&Fitch, Selfridges, The Gap, LVMH, Dillards, Theory, Anne Taylor, Target, Crate+Barrel, and Portico NY as well as publications such as Fast Company,  Travel & Leisure, Out, Space, The Advocate and Cargo. His work has been recognized by the Art Directors Club of Canada and the National Magazine Awards, earning various gold and silver awards in the  fashion, portraiture and still-life categories. Chris is also a graduate of OCAD’s photography program.