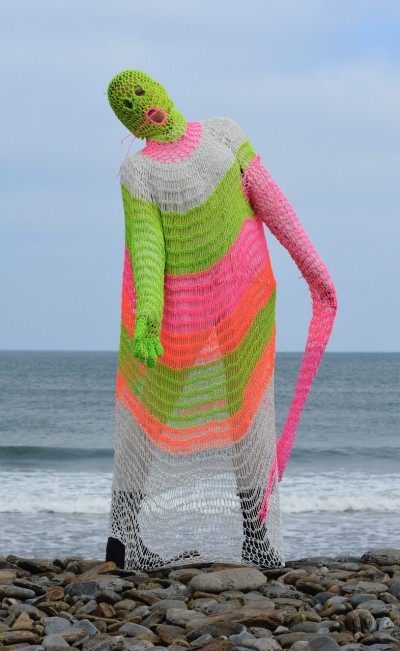 Omar Badrin, alumnus from the Interdisciplinary Master's in Art, Media and Design and the 2015 IAMD GradEx Medal Winner was awarded one of three Melissa Levin Emerging Artist (MLEA) Award, administered by the Textile Museum of Canada. The MLEA Awards helps emerging artists conduct self-directed activities such as art production, apprenticeships, residencies or research. The award is in memory and honour of Melissa Levin (1958-2015), an artist, mentor and teacher whose career as a textile and costume designer was synonymous with exuberant love of colour and pattern. 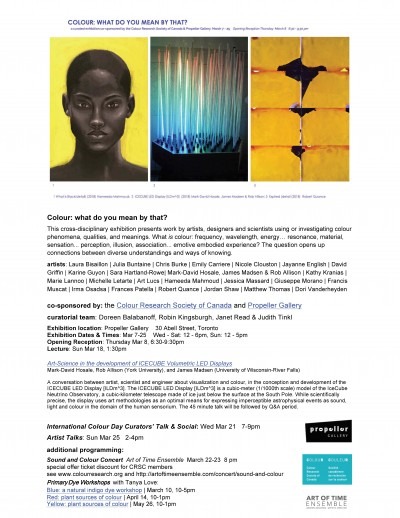 Dr. Robin Kingsburgh completed her Ph.D. in Astronomy in 1992 at University College London, and worked as a postdoctoral fellow at the University of Mexico from 1993-1996. Her research interests from that period included planetary nebulae and their central stars, and Wolf-Rayet stars. Since 1996 she has been teaching various Natural Science courses at York University, including Understanding Colour and Science and Creativity.

Nicole Collins' artistic practice focuses on the effect of time, accumulation, force and heat on visceral materials, through painting, drawing, installation, intervention, video, and sound. Since 1994 she has exhibited extensively including solo exhibitions at The Koffler Art Gallery, Toronto (2018), The University of Waterloo Art Gallery (2013), The Art Gallery of Ontario (2013) and The Embassy of Canada in Tokyo (2001) and group exhibitions in Toronto, Hamilton, St. Johns, New York, Miami, London, Venice and Zurich. 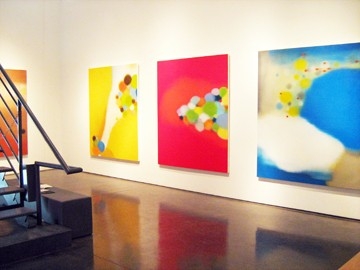 Newzones is pleased to announce a solo exhibition of new paintings by Anda Kubis entitled 'Particles
and Light.'

As part of the New Abstraction movement in Canada, Kubis continues her play with colour, space and
illusion. In 'Particles and Light', the paint application has become more painterly and improvisational
than previous bodies of work. Kubis continues to capture a screen-like illumination from within the picture
but now the light clusters and refracts across the surface of the canvas.

The paintings in 'Particles and Light' make allusions to microscopic vision and visual models used in science. Kubis is interested in the invented pictures that are used to illustrate and demonstrate complex
concepts in scientific theory. This new body of work expands upon Impressionist concerns but where the
Impressionists interpreted their landscape as a means of embracing the impact of the camera, Kubis is
inspired by the abstract realm of digitally generated images.

Artificial colour is combined with natural, neutral tones to create shifting, slippery spaces where the
viewer feels they are on the verge of making something out. In 'Particles and Light' Kubis attempts to
make paintings that sneak up on you, that invite you to linger longer in solving the mystery before your
eyes.

As one of Canada's notable mid-career painters, Anda Kubis' new exhibition is one not to be missed.
Born in 1962, Toronto, Ontario, Anda Kubis received her Bachelors of Fine Arts from Nova Scotia College of Art and Design in 1987 and her Master's of Fine Arts from York University in 1992. Her paintings have been widely exhibited across Canada in numerous solo and group exhibitions. Much has been written about Kubis' work including a 2004 review in Canadian Art Magazine. Anda Kubis is currently an assistant professor at the Ontario College of Art & Design. 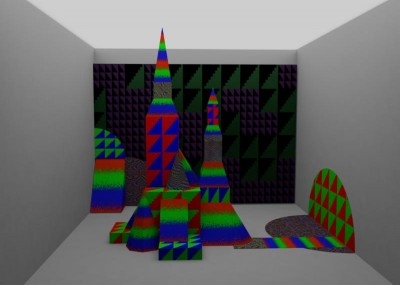 ANGELL GALLERY is pleased to present PHILIPPE BLANCHARD: COLOUR RHYTHM, a special installation by this acclaimed multi-disciplinary artist. The exhibition will be on view in the Project Room from February 21 to March 22, 2014, with an opening reception on February 21, 6-9 PM.

Philippe Blanchard's dazzling sculptural light installations have been likened to "walking into an animated GIF." Using programmed RGB lighting and a library of screen-printed patterns he has developed, Blanchard creates "expanded animations," in which the moving image is liberated from the constraints of the frame, the screen, fixed durations, representation and two-dimensionality. The resulting immersive environments reflect a diverse array of influences, ranging from special effects and computer graphics to the role of pattern in fine art, decorative arts, music and pop culture.

For Colour Rhythm, Blanchard draws upon both early 20th century avant-garde art and today's digital culture. Walls and tower-like forms in the Project Room will be covered with screen-printed modular wallpaper in patterns inspired by Sonia Delaunay, Gunta Stölzl and Anni Albers, three modernists who worked with textiles. Investigating pattern's sometimes ambivalent relationship to the avant-garde, Blanchard also considers its role as aid to contemplation, as found in Islamic art, the serial compositions of Steve Reich and Terry Riley, or even in contemporary electronic dance music.

Blanchard's RBG (red, blue, green) colour scheme references the primary colours of light, as well as the building blocks of digital imagery. Programmed lighting animates the repeating patterns, transforming the plain room into an invigorating psychedelic space in which elements derived from pop culture, modernism and traditional quilting patterns fuse into an Op Art experience for the 21st century.