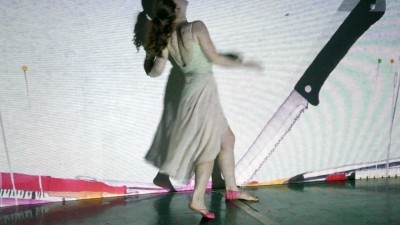 A work by OCAD U alumna Zeesy Powers. Part of SummerWorks Festival

Common Fate is an algorithmic performance. Animations, music and a series of dances cycle through one another, creating distinct three-minute performances. As the show unfolds, the solos are combined into duos, triplets, and full-cast choreography, while musical themes layer in the increasingly complex live score. Watercolour animations provide a dreamlike cast to the bodies in motion, projected environments that shift between the concrete and symbolic. What seemed tragic in one context becomes laughable in another, what appeared silly takes on depth. We perceive individuals moving in parallel paths as a unified group, regardless of any actual connection between them. In moments of harmony and dissonance, we invent meaning from an empty plot.