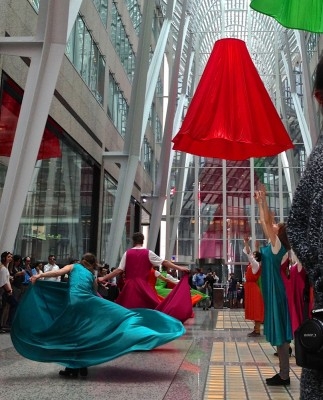 Soft Spin offers a fresh view of the hard-surfaced symmetry of the space with the playful interruption of five enormous fabric forms, gently twirling overhead. Colour, texture, movement, and decidedly flirtatious forms invite visitors to look up and embrace the unexpected, highlighting the ever-present potential for encounters with unforeseen pleasure and drama in the day-to-day.

Soft Spin offers a fresh view of the hard-surfaced symmetry of the space with the playful interruption of five enormous fabric forms, gently twirling overhead. Colour, texture, movement, and decidedly flirtatious forms invite visitors to look up and embrace the unexpected, highlighting the ever-present potential for encounters with unforeseen pleasure and drama in the day-to-day. 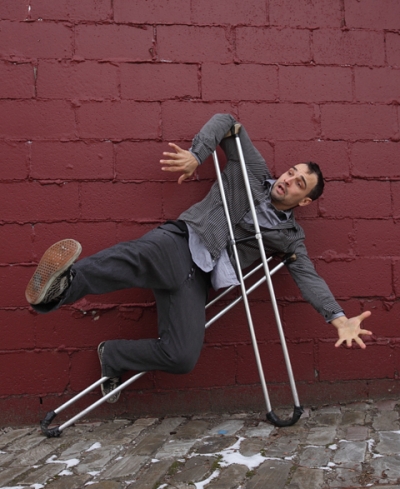 “My greatest accomplishment as an artist is to stay true to the process and listen closely to what it is whispering into my soul.”

Bill Shannon says his aesthetic works exist beneath a hovering, massive and terribly bloody notion of “freedom.” Although he believes his work is obscure and often misunderstood, he’s performed, presented and choreographed around the world, both as a solo artist and for Cirque du Soleil, earning numerous awards and honours, including a Foundation for Contemporary Art Award and a John Simon Guggenheim Fellowship. In the process he’s stolen hearts and sparked imaginations with the passion and egoless humility that fuels everything he does.

“I see no pinnacle of greatness in my own accomplishments that might outshine the importance and value to me of my creative process,” he says. “The unique intersection of my time on this Earth, the space I inhabited during that time and the peculiar and specific human condition I was destined to by birth are far and away the greatest determinants of what I have been able to achieve as an artist and as a human.”

Shannon, who is at OCAD U for a President’s Speaker Series talk on Wednesday, September 18 and a performance at the Festival of the Body on September 19, is a natural storyteller working in the medium of body language — together with a massive and bold dose of experimentation. “On a micro-scale I have learned that in all contrasting and conflicting energies balance is possible in the most unexpected of ways,” he says of his work. In addition to dance and choreography, he also uses drawings, sculpture, video, writing, performance, acting, clowning, skating and speaking to express his ideas.

Shannon, who says he “feels like a duck billed platypus laying an egg” about being asked to speak at OCAD U, shaped and grew his work in the Hip-Hop and House dance movements in New York and internationally. He says the most important thing students studying in creative fields should know is that if a goal is a dream with a deadline, abandon the goal.

“Follow the dream and possibly arrive at a greater unknown that no goal or deadline could have ever been set for in the first place,” he says. “Failure happens. Failure may possibly have as many chicken-soup-for-the-soul sayings as love does. duckduckgo/copy/paste here:  _____________________________. Repeat.”

See Shannon perform at the Festival of the Body

Bill Shannon: “Retaining neutral Palette Through a Forest of Heroic and Tragic Positions”

OCAD University is pleased to present a free public talk by artist, dancer and performer Bill Shannon as part of its President’s Speaker Series.

Bill Shannon was born in Nashville, Tennessee in 1970. In 1975 he moved to Pittsburgh, PA where he spent the remainder of his childhood and adolescence. In 1992 Shannon attended the The Art Institute of Chicago, earning a BFA in 1995. In 1996 Shannon moved to NYC and immersed himself in the art, dance and skate cultures of Brooklyn and Manhattan while expanding his performance work to multimedia video installations, group choreography and the theater arts.

Over the past two decades Bill Shannon’s installations, performances, choreography and video work have been presented nationally and internationally at numerous venues, festivals and events including, Sydney Opera House, Tate Liverpool Museum, NYC Town Hall, Portland Institute of Contemporary Art, The Holland Festival, Amsterdam, Temple Bar Dublin, Kiasma Museum Finland, Hirshhorn Museum and many more. Shannon also completed a project with Cirque du Soleil where he choreographed an aerial duet and a solo on crutches for their 2002 production "Varekai," which toured into 2011.

In 2005 Shannon moved his family back to his childhood home of Pittsburgh Pa to participate in his extended families urban farming project, Wild Red's Urban Farm. Shannon, as of 2011, performs publicly on a project by project basis while also working on a book project, video installation and other new media and green materials projects. Shannon continues the evolution of his technique of dance on crutches via spontaneous street skating sessions through the city to local spots with smooth tip surfaces.

About OCAD University
OCAD University (www.ocadu.ca) is Canada’s “university of imagination.” The university, founded in 1876, is dedicated to art and design education, practice and research and to knowledge and invention across a wide range of disciplines. OCAD University is building on its traditional, studio-based strengths, adding new approaches to learning that champion cross-disciplinary practice, collaboration and the integration of emerging technologies. In the Age of Imagination, OCAD University community members will be uniquely qualified to act as catalysts for the next advances in culture, technology and quality of life for all Canadians.

Dancing the Unspeakable - A Halloween event with Unify Toronto Dialogues

Please join us for a special happening that explores the unspeakable mysteries, our shadow sides that underpin a creative and searching life, sharing with others in movement and music, visual expression, and creative verbal and nonverbal dialogue.

How do we, as individuals, as communities, as human beings, be with the outrageousness of our futures?

How do we express the mysteries and the shadows, the inevitability of our own ultimate future?

How do we stay in action when death is inevitable? (personal death, death of ecosystems, decay of economic and other institutional structures that once held us secure)

Halloween has been a time for playing with otherwise unspeakable. A time for acknowledging fear and lack of control. A time of even celebrating and playing with Death’s inevitability. On Halloween, and the Day of the Dead that follows death can be both frightening and funny—that is, when we try to escape and control it.

Dance offers us an opportunity to “speak” to the unspeakable, to express that which is too much for us to handle with mere words. In dance we can play with and release our overwhelm, so that we might grow into our next best futures. Imagery and deep dialogue enable a listening for the unspeakable to present itself. We'll also hold brief sessions for dialogue and drawing.

Guest Facilitator
Patricia Kambitsch explores and promotes tools for dialogue available through the visual arts, theatre, creative movement and dance. In her work she seeks to engage all of us: all our senses, imaginations, and creative powers with artistic tools. She currently enjoys clowning and participates in dance projects with the MomoButoh Dance Co. in Washington State.

Seven Fraser Ave is at the very end of the short Fraser Ave off King West, 2 blocks east of Dufferin. Free parking is normally available in front of 15 Fraser, or down the street. Walk through the parking lot, through the double doors past the lobby. Studio 13 is the last studio down a long hallway in 7 Fraser Avenue. We will be making Halloween preparations in the building, but don’t be afraid to go ALL the way down the hall!