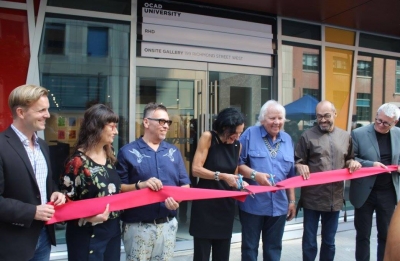 “Our honorary doctorate recipients are reflective of the qualities we want to impart to this year’s graduating class as they seek to make their own impressions in the world,” said Dr. Sara Diamond, OCAD University President and Vice-Chancellor. “Douglas Coupland’s unparalleled creative musings on contemporary society are demonstrative of the creative practice we hope to inspire in our students. As our first Advisor/Mentor in our Indigenous Visual Culture Program, Duke Redbird has helped guide Indigenous and non-Indigenous students, faculty and staff in Indigenous knowledge and artistic practice. We congratulate our 680 graduates, alongside Douglas and Duke, for everything they bring to the world!”

Biographies
With the publication of his remarkable and prescient 1991 novel Generation X, artist Douglas Coupland became hailed as the voice of his age. Since that important moment in literary and cultural history, the artist and critic has turned his sharp and insightful attention to design, social commentary, journalism, art theory and criticism as well having managed a broad, active and acclaimed studio practice. Indeed, Coupland’s intellectual engagement effortlessly crosses disciplines and categories of cultural production. The author of 14 works of fiction and four works of non-fiction, a designer of clothing and furniture, an artist of immense range and an internationally known cultural figure respected for his powers of observation and analysis, Coupland’s longstanding, indefatigable interest in the minutiae of everyday life is simultaneously a centrally rich critical vein in his work and an extension of his own way of being in the world. Fascinated by the conditions of global capitalism and social life, Coupland is, in so many ways, a type of preternatural archaeologist and sociologist of the present: a pithy, wry, and at times, unnerving commentator on the complexities and implications of recent and contemporary life in the western and westernized world.

Trained at Emily Carr University of Art & Design in Vancouver, Coupland was from the start of his career intrigued by the character and condition of modern life. After invaluable and creative stints in Japan and Toronto, he set out to document the temperament of his generational cohort: the inheritors of post-WWII North American technological primacy and material abundance. His early writings with their recognizable characters and at times painfully familiar circumstances, contributed to Coupland’s reputation as an astute and unstinting narrator of contemporary life. Fascinated by technology and social conventions, by popular culture and critical theory, experimental in his thinking and artistic practice and motivated in all ways by his brilliant and timely curiosity, Douglas Coupland is one of the most important thinkers and artists working today. Recent works include Player One: What Is to Become of Us (the novelized 2010 Massey Lectures that the author delivered in five cross-country readings); the now iconic Digital Orca sculpture in Vancouver (2010); an acclaimed series of QR Code paintings, (2011-2012), one of which was recently acquired by the Albright-Knox Museum in Buffalo, New York; the Canadian Fallen Firefighter Memorial Sculpture and Park in Ottawa (2012), The Museum of the Rapture at Scotia Bank’s Nuit Blanche in Toronto (2012), a line of furniture for SwitzerCultCreative and a series of public appearances across the globe in which Coupland has spoken about his experiences as an artist and the deep value of art education and art for social well-being. Coupland’s first museum solo show, Anything is Everything is Everywhere is Anything, starts at the Vancouver Art Gallery in June 2014 and then tours internationally.

Duke Redbird served as the first mentor advisor in the Indigenous Visual Culture Program at OCAD University from January 2009 until May 2012. An established Indigenous intellectual, poet, painter, broadcaster, filmmaker and orator, Redbird brought his breadth of culture knowledge, political activism and artistic practice to the benefit of students and faculty alike, as OCAD University took its first steps in the development of a unique program in Indigenous Visual culture, art media and design. As the program’s first mentor/advisor, Redbird was instrumental in the implementation of innovative student services and outreach within OCAD U and beyond, bringing an Indigenous approach to art education that was rooted in his pioneering work with Tom Peltier at the Manitou Arts Foundation in Northern Ontario in 1973.

He began his career as an actor and poet at the height of the civil rights movement in the 1960s and quickly became socially active on behalf of Aboriginal and Métis human rights. He served as Vice-President of the Native Council of Canada from 1974 to 1976, and President of the Ontario Métis and Non-status Indian Association from 1980 to 1983. In addition to his public service, Redbird works as a multifaceted artist, practising across a number of disciplines including literature, painting, theatre, cinema and most recently rap poetry. A well-known broadcaster and television personality, he is in demand as a public speaker in university, community college and elementary school settings.

Redbird received his Master of Arts in Interdisciplinary Studies from York University in 1978, and he is a PhD candidate in Sociology at York University. His Master’s thesis “We are Métis” was published in 1978 and continues to be a seminal text on the history and political aspirations of the Métis to this day. As a poet, essayist and screenwriter, Redbird has published and performed poetry readings, theatrical productions, video and film, both locally and internationally. His poem I am a Canadian was the inspiration for a multimedia musical production of his poetic work at a performance before Queen Elizabeth II. In 1985, Redbird represented Canada at the Valmiki World Poetry Festival in India, reading the opening address. He has written and directed many dramatic films and documentaries. In 1993, Redbird was presented the Silver Hugo Award at the Chicago Film Festival for a drama he produced for TVOntario. For 15 years, from 1994 to 2009, he was the familiar face of Aboriginal Toronto as the Arts & Entertainment reporter for CityTV. In the summer of 2012, Redbird moved to his property on Bark Lake, near Madawaska, Ontario, to begin work on the development of a “food forest” and a Centre for Compassionate Living. His interests in sustainable, just and conscientious human evolution continue to inspire and guide students and faculty at OCAD University and beyond.

Coupland and Redbird will each address the graduating class of 2013 at OCAD University’s Spring Convocation ceremony, taking place on Thursday, June 6 at 1:30 p.m. at Roy Thomson Hall, 60 Simcoe Street, Toronto. This is an invitation-only, ticketed event. Media are welcome.

OCAD University (OCAD U):
OCAD University (www.ocadu.ca) is Canada’s “university of imagination.” The university, founded in 1876, is dedicated to art and design education, practice and research and to knowledge and invention across a wide range of disciplines. OCAD University is building on its traditional, studio-based strengths, adding new approaches to learning that champion cross-disciplinary practice, collaboration and the integration of emerging technologies. In the Age of Imagination, OCAD University community members will be uniquely qualified to act as catalysts for the next advances in culture, technology and quality of life for all Canadians.