Jason Goodman is a Sessional Instructor at OCAD University, having taught UX Design & Prototyping at the Masters Level, Toy Design at the Undergraduate level, as well as corporate training with both continuing education and OCAD Co. (the corprate/business training division). 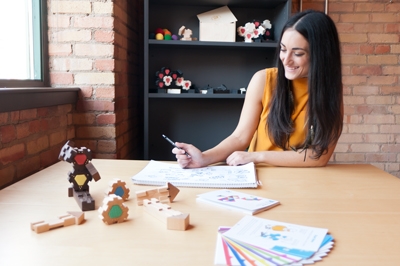 It’s been almost a year since Ilana Ben-Ari of Twenty One Toys took first place in OCAD University’s 2014 Imagination Catalyst Pitch Competition. World Creativity and Innovation Week (April 15 to 21) seems like a great time to check in and see what’s been happening since then.

Twenty One Toys’ signature product is the Empathy Toy. Originating from Ben-Ari’s industrial design thesis project at Carleton University, the toy comprises wooden puzzle pieces with a variety of textures, shapes and colours. One or more players take a pre-made pattern and they must explain it to one or more other players – who have a set of identical, but loose, pieces – so that they can assemble the very same pattern.

But here’s the rub: all the puzzle-players wear blindfolds! The blindfolds come off when the assemblers think they have solved the puzzle. At that point, everyone – including silent observers – discusses what happened during the game. As Ben-Ari (Twenty One Toys’ founder and lead designer) notes, “that’s often the most instructive part of the exercise.”

Since joining the Imagination Catalyst’s one-year Take It to Market incubator program, the Empathy Toy has gained serious traction. The first 1,000 units sold out in December 2014, and a second batch of 1,000 arrived from the factory in April 2015. This swift spread – the toy is in use in more than 800 schools worldwide – has been boosted by the many positive reports in the press, including in The Guardian, Fast Company and Time.

“One of the most positive aspects of the Imagination Catalyst is the contact it gives me with leading entrepreneurs,” says Ben-Ari. “These inspiring people share their experience with me and give me great advice.” In particular, Ben-Ari points to the influence of Doreen Dotto and Lahav Gil. The president of uKloo Kids, Dotto has given Ben-Ari direction on wholesale pricing, certification and legal issues, working with distributors and pricing models. For his part, Gil, the CEO of the Kangaroo Group and co-founder of Bauhaus Tech Ventures, shared his knowledge of mass production, partnerships and distribution models.

“These generous entrepreneurs have been available to jump on the phone and give me advice on the challenges they faced when they were growing,” Ben-Ari says. “It’s been incredibly valuable as we face the hurdles associated with the expanding demand for our toys.”

When Ben-Ari began, she conceived of the Empathy Toy as something that would be used largely by elementary-school students. She and her team soon discovered, however, that older people enjoyed and learned from it. As a result, the firm is about to launch the Empathy Toy for corporate use as well as training and professional development workshops for employee groups. 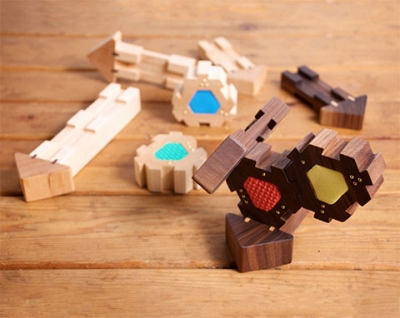 Canadian start-up Twenty One Toys has partnered with Spin Master Ltd. to send its award-winning Empathy Toy to children and communities in need in Israel and Gaza. The company’s founders, Gonzalo Riva and Ilana Ben-Ari, hope the toy will bring moments of play and relief to the conflict zone.

Last May, Riva and Ben-Ari took part in OCAD University’s Imagination Catalyst Pitch Competition. Along with 18 other new entrepreneurs, they had three minutes to present their product to a panel of judges who scored them based on commitment and overall presentation; differentiation and innovation; quality of business model; customer validation and motivation to invest. Twenty One Toys took the top prize of $10,000 in seed money.

The Empathy Toy is a blindfolded puzzle game for children and adults, designed to inspire players to think creatively, laugh through frustration and help build a spirit of dialogue and understanding.

Spin Master Ltd. has sent thousands of toys to war-torn areas over the past eight years. Twenty One Toys quickly assembled a batch of Empathy Toys to join Spinmaster’s shipment this week. El Al Airlines is providing free shipping and toys sent to Gaza will be distributed by Dr. Izzaldin Abuelaish, a renowned humanitarian author and physician who travels the world to promote peace through non-violence.