Big congratulations go to B.H YAEL, Faculty of Art, for winning MOST ORIGINAL FILM BY A LOCAL FEMALE DIRECTOR of the Toronto Urban Film Festival (TUFF), for her film NO LIES.

Big congratulations go to B.H YAEL for winning MOST ORIGINAL FILM BY A LOCAL FEMALE DIRECTOR of the Toronto Urban Film Festival (TUFF), for her film NO LIES.

The Toronto Urban Film Festival (TUFF), North America’s largest commuter film festival, celebrated its successful 10th edition with an awards ceremony hosted at the Gladstone Hotel where over $20,000 in cash and prizes was awarded to talented filmmakers from Canada and across the globe.

The jury’s choice for MOST ORIGINAL FILM BY A LOCAL FEMALE DIRECTOR was made easy by this mesmerizing memoir that employs an arsenal of animated techniques and elements to bring a girl’s diary to life. This perfectly succinct short about Dad’s double life and his daughter’s anguish over having to keep his secrets, is a raw, gut-wrenching and earnest exercise in hypocrisy. YAEL receives a 1-Year Associate Membership and a $1,200 Programming Pass from Women in Film and Television Toronto. 2 Benefactor Memberships to the Inside Out LGBT Film Festival for her film NO LIES!

“It was a remarkable year with tremendous talent,” says Sharon Switzer TUFF cofounder and Director and, President of PATTISON Outdoor. “These were difficult decisions but the acclaim is well deserved. We thank our dedicated filmmakers for their contributions and continual support over the past ten years and look forward to another ten years of TUFF.”

North America's first, largest, and longest running subway film festival, the Toronto Urban Film Festival (TUFF), features silent, 60-second film video and animation from across the globe. Reaching more than one million daily commuters on subway platform screens across the Toronto transit system, TUFF blurs the line between art and reality within the utilitarian setting of public transit every September.

Art for Commuters (A4C) was founded in 2007 by Sharon Switzer, and brings over 100 artworks per year to the Pattison Onestop TTC subway platform screens. Through these projects, Art for Commuters offers a wide range of contemporary artistic voices the opportunity to showcase their work in the public spaces frequented by urban travellers.

Les Rencontres Internationales Paris/Madrid/Berlin is a festival presenting film, video, installation, net art, and concerts by 150 artists and filmmakers from all-over the world.

The Regent Park Film Festival is gearing up for another exciting year of diverse films, created by young directors, editors, and producers from the community. The program also promises to deliver international films produced as far away as Afghanistan and Australia.

"This year's festival is particularly exciting for us, because local and international emerging and established directors will be in attendance, from the Yukon, Bella Coola, Nairobi, Burundi, Kabul and NYC," says Festival Director Karin Hazé.

The festival has several new highlights including:

RPFF Professional 3D Live Animation Film Workshop for Everyone: November 1 and 2
This two-day film workshop will create a 30 minute animated film mixing
green screen techniques with performance to insert the participants
into archival photographs and 3D simulations of Regent Park.
Participants will examine historic neighbourhood photos, and then
develop short scripts in small groups with Cayle Chernin, acclaimed
Canadian producer, writer and actor. Participants will then perform
their scripts in a green screen session with filmmaker Jason J. Brown.

All RPFF screenings are at Nelson Mandela Park Public School. Screenings and childcare are free.

What if there were movies made the same way as suits, custom fitted, each one tailored for one person? Some of the brightest stars from Toronto's fringe film and video scene--including OCAD alumni Midi Onodera, Jubal Brown, Su Rynard and OCAD Professor Richard Fung--will show dazzling and mysterious short films, and then discuss the genesis of their projects with Mike Hoolboom, editor of the collection, Practical Dreamers: Conversations with Movie Artists (Coach House Books).

Island is a visual and audio portrait of the shoreline of Toronto island. This project was developed for the media festival "Intermodem" in Hungary, September 2007.
For 8 days, Jacky Sawatzky walked a section of the shoreline documenting these walks with a video camera. The videos where uploaded to a the festivals server. At the end of the festival week the walk around the island was completed as well as the video.
On saturday December 8 th at 5.14 PM the newly edited version of this video will be screened in Jacky Sawatzky's studio at Gibraltar Point Centre for the Arts on Toronto Island. The art center's van will pick people up at the Wards island ferry dock for the 4.30 PM ferry (arriving Wards at 4.45 PM). This van will return to Wards for the 6.45 PM ferry back to the mainland. For people who want to take a bike, the centre is a 15 minute beautiful ride from the Wards ferry dock. The studio is the one with the ramp facing the courtyard and a note on the door. Snacks will be served and if you want a drink, BOB. For people with severe cat allergies, at the least one cat will be present. Dogs are not welcome. (sorry!)
Excerpts of "Island" http://www.intermodem.eventline.hu/en/main.php?content=resztvevok&member... 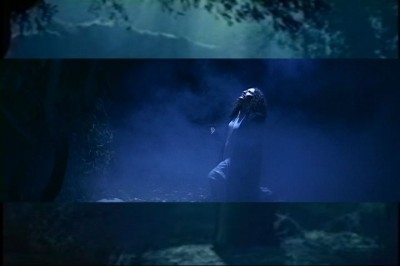 VERBATIM Film Festival presents collaborative works by Toronto-based artists and educators, Johanna Householder and b.h.Yael. Approximations: parts 1 ' 3, is a project series which takes an ironic and critical look at Hollywood films and their over-articulations of male power. The series includes The Mission, (4min 21sec) December 31, 2000 (7min 22sec) and Next to Last Tango (7min). The films referenced include Apocalypse Now, 2001: A Space Odyssey, and Last Tango in Paris. With much wit and wisdom, the gendered apocalyptic vision of Mel Gibson's Passion of the Christ is taken up in VERBATIM (7min 45sec).
When Gibson released the film in time for the Easter screenings of 2004, it had received an enormous amount of pre-publicity around Gibson's vaunted goal of verisimilitude, which included the cast speaking in Aramaic and Latin, but didn't exclude the studio set for the garden of Gesthemene, flooded with smoke and blue light, or the previously unreported presence of the Devil (herself) on the Via Dolorosa.
'Our strategy is to open up the question about accuracy versus interpretation, a tactic that Gibson used to ensure that the conservative Christian audiences, for whom it was made, would approach The Passion with proper, uncritical reverence. But then Pope John Paul II agreed: 'It is as it was,' he was reported as saying in the Wall Street Journal. This version just is.'
Biographies
Both b.h.Yael, and Johanna Householder are professors of Integrated Media Program in the Faculty of Art at the Ontario College of Art and Design.
Johanna Householder has been making performances and other artwork in Canada since the late 1970s. She was a member of the notorious, satirical feminist performance ensemble, The Clichettes, who performed under variable circumstances, throughout the 1980s. Householder has maintained a unique performance practice, often collaborating with other artists. She is one of the founders of the 7a*11d International Festival of Performance Art, and with Tanya Mars, she co-edited Caught in the Act: an anthology of performance by Canadian women, YYZ Books, 2004.
b.h.Yael is a Toronto based filmmaker, video and installation artist. Yael's work has exhibited nationally and internationally and has shown in various settings, from festivals to galleries to various educational venues. Her works have been purchased by several universities. These include Fresh Blood, A Consideration of Belonging, In the Middle of the Street, and Trisk-aidekaphobia. In 2006, Yael premiered Palestine Trilogy, three videos that focus on activist initiatives, addressing the politics of Palestine and Israel in sites of solidarity. Yael has just completed Trading the Future, a video essay questioning the ways in which secular culture has embraced apocalypse as inevitable. 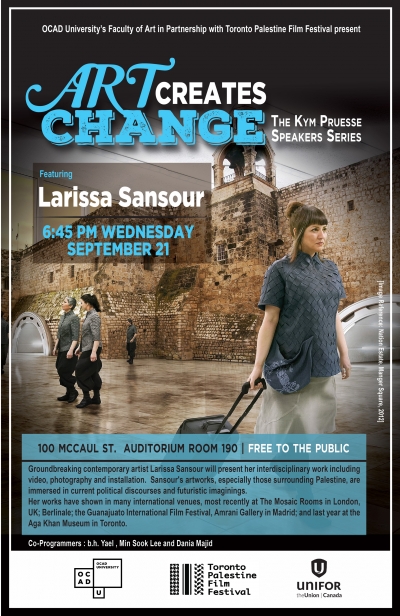 Groundbreaking contemporary artist Larissa Sansour will present her interdisciplinary work, including the speculative trilogy, In the Future They Ate from the Finest Porcelain (2016), A Space Exodus (2009) and Nation Estate (2012). Sansour's artworks, especially those addressing the history of Palestine and the Middle East, are immersed in current political discourses and dystopian future imaginings, combining live motion and CGI. Sansour's works have shown internationally, most recently at The Mosaic Rooms in London, UK; Berlinale; the Guanajuato International Film Festival winning the Best Short Experimental award; Amrani Gallery in Madrid; and last year at the Aga Khan Museum in Toronto. 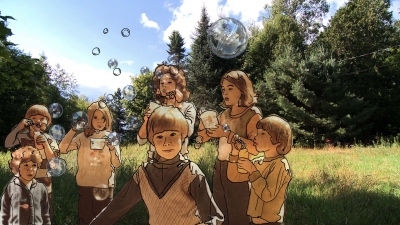 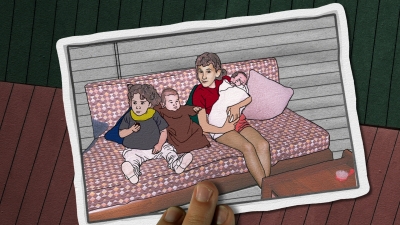 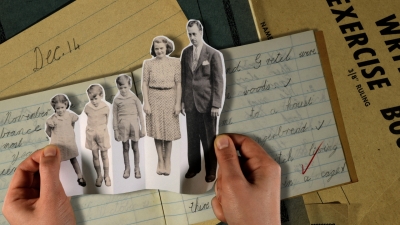 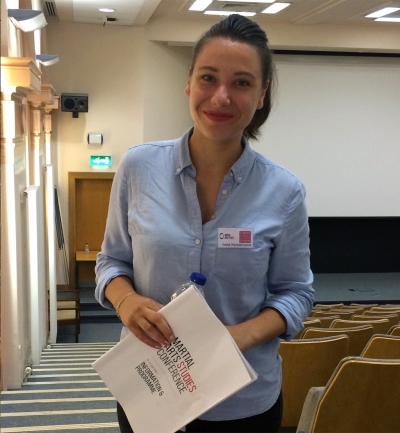 We send congratulations to Iveta Karpathyova, a second-year student in the Interdisciplinary Master’s in Art, Media and Design (IAMD) program, who won the Martial Arts Studies Film Competition hosted by the Martial Arts Studies conference in Cardiff University (UK), held from July 19-21, 2016. Her film, which she developed in her first year of study at OCAD U, was screened alongside fellow winner Philip Loy as part of the conference.

Ms. Karpathyova offered insights into her experience at the conference:
“I met scholars and practitioners of various types of martial arts over the course of three days. The most valuable experience was forming new relationships, initiating collaborations and discussing my research on embodiment with authors and experts in this flourishing field. I received a lot of insight into current topics of research within the field of martial arts including pedagogy, gender, identity, film aesthetics, historical records, culture and tradition, health and well-being, spiritual and holistic theory.
Besides gaining insight into current academic discourse on kinetic intelligence, embodied research and movement studies, I was invited to submit my animations to the Martial Arts film festival and interviewed for Dojo TV on my experiences as a practitioner and researcher within the field.”

More about the IAMD Program: http://www.ocadu.ca/academics/graduate-studies/interdisciplinary-masters-in-art-media-and-design.htm