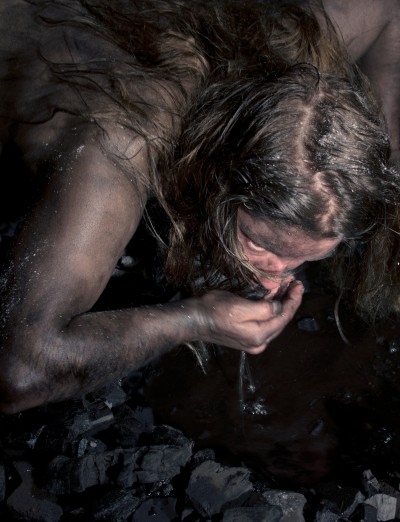 A dark and collapsed world of fallen souls in decay surrounds us as we enter Eldon Garnet's new large-scale photo exhibition ”Garden of Hell on Earth”. It is with great pleasure that we present our second solo show with the acclaimed Canadian multidisciplinary artist.

Back in 2009, we embarked on our first fateful expedition across the Atlantic in the first tentative stage towards an international exhibition profile. These initial maneuvers in the overall transformation led us directly into the hands of the skillful Garnet. His intense personified narratives and ambitious large-format photography have been exhibited in museums and art galleries all over Europe and North America, making him an evident candidate, both then and now, to conquer our exhibition room with his artistic tableau of staged human installations.

As the title explicitly indicates, Garnet has this time created a paradise devoured by rottenness, leaving man naked and crushed in an aesthetic wasteland of aseptic ashes. Their soiled struggle for survival is a symbolic death from which something new can be built. As a Phoenix arising from the ashes and ascending high in the sky, man's resilience is the single green sprout heralding a hope ahead.

The overwhelming dimensions of the large-scale formats absorb us and send us far deeper into the images than the frame physically allows. The almost invisible glass surface blurs the distance between us and the inhabitants of Garnet's “Garden of Hell on Earth”, who in their cramped positions create a discomfort within us, as we observe them with disturbing recognisability. The intense atmosphere of haunting desperation silently oozes out of the images and disseminates in the space as an anxious warning to all of us.

With a unique aesthetic language Eldon Garnet creates a poetic world, where time stands still for a moment in the aftermath of a brutal breakthrough. The inspiration from mythology and the metaphorical landscape of bible history is inevitable to note. As constructed marionettes, the inhabitants of the “Garden of Hell on Earth” become the faces of current social, political and economic issues. When modern age reaches its grand finale, and there is nothing left but soot and stone, man will inevitably begin to rebuild their world.

Prepare yourselves to reach through your entire registry of emotions when Eldon Garnet opens the door to the shadow side of Paradise and lets the darkness take over.

The exhibition shows ten large-scale iconic photographs. Eldon Garnet will be present at the opening and available for interviews.