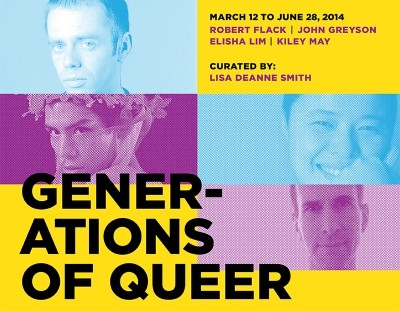 This exhibition centres on storytelling; creating a dialogue between the works of two senior artists and two younger artists who have come into queer discourses as beneficiaries of the activism of their predecessors.

Robert Flack (1957-1993) was born in Guelph, ON, and moved to Toronto to study at York University (BFA 1980). He began employment at Art Metropole in 1980 and assisted on General Idea projects. From 1981 his work was shown nationally and then internationally. Public collections include the National Gallery of Canada and the Canadian Museum of Contemporary Photography. Paul Petro Contemporary Art represents the Estate of Robert Flack. www.paulpetro.com

John Greyson is a Toronto based film and video maker who has been politically active in the Toronto queer community for the past 33 years. With short videos and feature films he explores topics ranging from anti-censorship battles, AIDS discrimination, same sex marriage, militarism, the tar sands, Israeli apartheid and the fight for AIDS treatment drugs in Africa and the world. He is recognized for his documentary interviews, historical narratives, opera, found footage and camp. His work reflects many of the legal and politically struggles for queers in the 1980s as well as world politics with a strong queer voice.

Elisha Lim exhibits illustrations and animated shorts internationally, and has advocated against transphobia and racism on United Nations panels and as the director of Montreal’s first Racialized Pride Week. Their comic strips Favourite Dating Tales, Sissy, The Illustrated Gentleman and 100 Butches are acclaimed by Autostraddle, Bitch Magazine and New York Times bestselling author Alison Bechdel, and their debut graphic novel 100 Crushes will be published in June 2014 by Koyama Press and launched at Onsite [at] OCAD U. www.elishalim.com

Kiley May is a young Mohawk storyteller, artist, creator and shaman. Kiley is also a two-spirit, trans, queer and genderqueer human being. Their gender pronouns are they/their/them. They work in film, photography, writing, journalism, fashion, dance and performance art.

Lisa Deanne Smith is engaged in a cultural practice that moves between mediums — art, curating, writing and community events — exploring issues of voice, experience and power. She has exhibited internationally including White Columns, The New Museum and Mercer Union. Currently, she is Acting Curator at Onsite [at] OCAD University. Recent curatorial projects include Biological Urbanism: Terreform ONE; No Dull Affairs: Karen Lofgren, Vanessa Maltese and Jillian McDonald; and I Wonder: Marian Bantjes.

ELISHA LIM TALKS ABOUT THEIR INCLUSION IN GENERATIONS OF QUEER 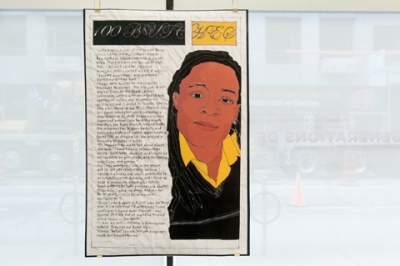 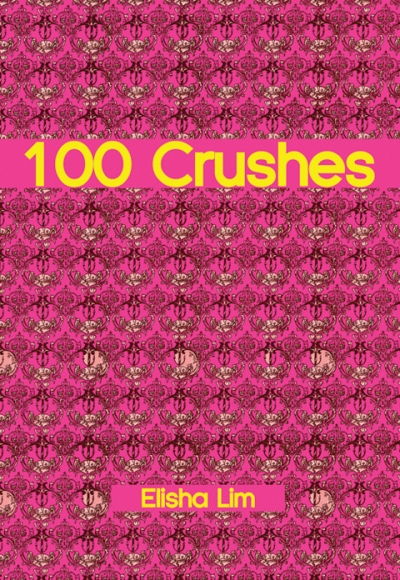 Elisha Lim’s work is a part of the Generations of Queer exhibit at Onsite [at] OCAD University. Curated by Lisa Deanne Smith, the exhibition (which also features the work of Robert Flack, John Greyson and Kiley May) is about storytelling and raising a public voice, exactly as you are.

Lim and May both situate themselves between genders using the pronouns they, them and their to define themselves rather than she or he. Lim is an artist and storyteller known for combining writing and drawing in sensitive, perceptive portraits. They exhibit illustrations and animated shorts internationally, and their work includes comic series 100 Butches, the calendar diary The Comfort of Queer Family Wisdom, drawing series Sissies and the Femmes that Inspire Them and graphic novel 100 Crushes.

Lim wrote about the opportunity to exhibit in Generations of Queer at Onsite Gallery [at] OCAD U:

I never got into art school. I applied and got rejected three times in a row. So the consistent invitations I get to exhibit my art really blow my mind. When curator Lisa Deanne Smith asked to come over to my house for a studio visit, I thought holy, I’d better make myself a studio to visit. Everyone in my house helped out. We emptied the guest room and acted like it had always been my art gallery.

Six months later I was sitting on a panel in the OCAD U auditorium, explaining my process next to legendary queer artist John Greyson. There’s also a “Generations of Queer” billboard at Yonge and Dundas, advertising our exhibit as if it was a blockbuster movie. How the art world works is amazing to me.

If you come down to the gallery you’ll see my friends. I make art in order to archive and celebrate the amazing, creative avant-garde that is my queer people of colour community. I’ve transcribed and illustrated these people and their stories because they have shaped the best parts of me.

They call me on my mistakes and celebrate me in my achievements. Leroi and I used to throw Gladstone parties for queer people of colour. Kama and I helped direct Montreal’s first Racialized Pride Week. Claudette tells me the only stories I know about non-white queers in Toronto in the 70s.

Come down and see them. When you read their stories hanging in the gallery, you’ll be looking at the best school I’ve ever been to.