HOW WE PAINT ARTIST SERIES

Have you ever looked at a painting and wondered ‘how did they do that?’; “How We Paint” is a unique artist speakers series presented by the program of Contemporary Drawing and Painting at OCAD University. Unlike a traditional artist talk, this programming invites esteemed local Toronto artists to share their materials and processes with the arts community at large. This dynamic programming will pull back the curtain on the artist studio and instigate conversations around our creative decision-making processes.

Funded in Part by the Slaight Family Foundation

Gordon Shadrach’s work has always focused on the ways people communicate non-verbally. Inferences are made daily by people when they interact with others and Shadrach invites viewers to utilize those skills when engaging with his portraits. Shadrach’s early works explored portraits that focused on the wearer’s shoes and clothing with no face shown, enabling the viewer to complete the portrait; imagining the unseen, and deciding on the race, gender, and social status of the sitter. Shadrach continues to investigate the semiotics of clothing and its impact on how Black men are portrayed.  Clothing can change how someone is perceived and relays information to others; however, society can reduce someone and make superficial judgments based solely on cultural biases. Shadrach’s portrait series of contemporary Black men dressed in historical clothing are framed in damaged antique and vintage frames. The patina and wear of the frames suggests historic weight and places the portraits during a time when Black people were rarely depicted in Western portraiture. Shadrach also explores color and pattern in the backgrounds of his portraits of Black people as a way of examining the innate bias of Western Art and Colour Theory. He invites viewers to reflect on their own interpretation of colors and how they relate to the subject.

Portrait artist Gordon Shadrach was born and raised in Brampton, Ontario in 1966 and has lived in Toronto for over 25 years. Gordon started painting in 2013 and paints in oil and acrylic on wood. He has exhibited in solo and group art shows in Canada and the United States. He works from photographs at his in-home studio in Toronto’s East end. He received his B. Des. (MAAD) from OCAD University and has a Master of Education degree from Niagara University. In the Spring of 2018, Gordon’s painting, “In Conversation”, was included in an exhibit developed by the Royal Ontario Museum titled, “Here We Are Here: Black Canadian Contemporary Art”. In the Summer of 2018, the exhibit went on tour and was presented at the Montreal Museum of Fine Arts and opened at the Art Gallery of Nova Scotia in June of 2019. Aside from his portraits, Gordon is known for his insightful artist’s talks and has appeared as a panelist on the TVO’s the Agenda (Reinventing the Museum) and CBC Radio’s Metro Morning (Group of Seven Out, Under-represented Artists In at the AGO). 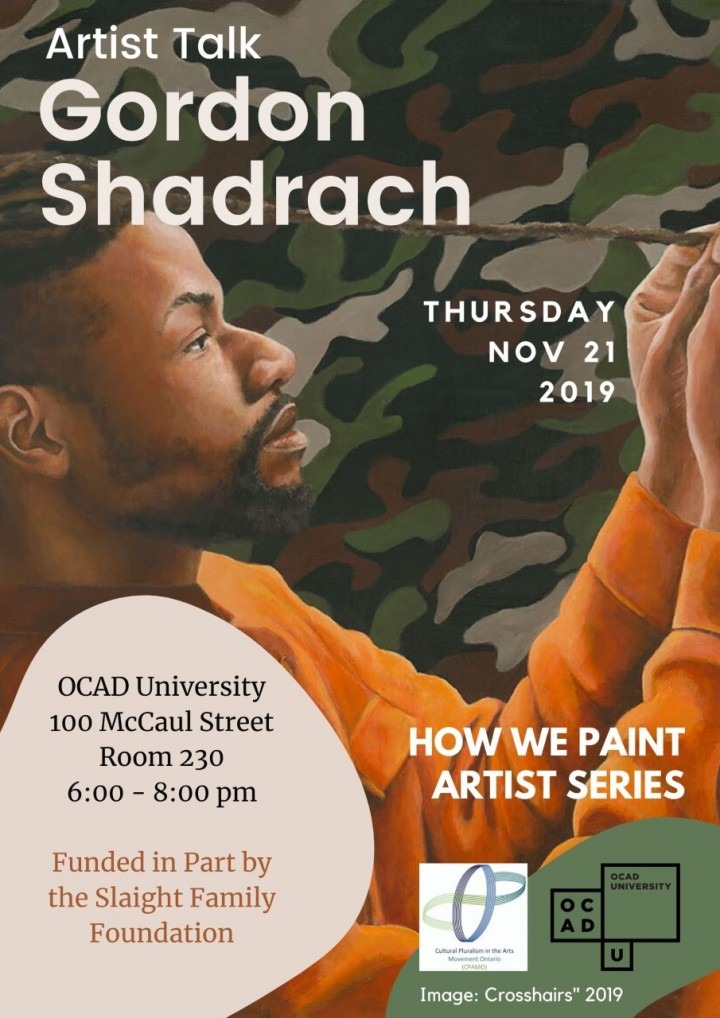