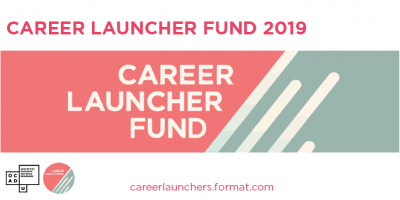 The Centre for Emerging Artists & Designers (CEAD) is excited to announce the return of the Career Launcher Fund for students graduating in 2019.

This fund supports activities relating to your early career success as you transition out of school. Eligible activities could range from participating in GradEx 104, attending residencies and workshops, or presenting your work outside of school.

Proposed expenses must be specific and could include anything that is important to advancing your career success. Special attention will be given to proposals that take into consideration creating an exceptional presentation of your work at GradEx 104 as well as the numerous privileges and access that end once you leave school, such as facilities, community, and mentorship.

Proposed expenses must be specific and could be up to $500 (minimum requested amount - $100).

Please submit all written components in one (1) PDF to the attention of Tak Pham tpham@ocadu.ca

This year’s convocation ceremonies will take place at Roy Thomson Hall, celebrating the graduation of some 700 students. Medal winners in 23 academic programs will be presented with their awards, a number of faculty members will be honoured with teaching awards for their exceptional contributions and honorary degrees will be conferred.

“It is a great pleasure to present these degrees to four phenomenal people who have made a tremendous impact on society through the arts and sciences. They are role models in their disciplines, and their work reflects the wide range of learning that takes place at OCAD University, including in the areas of design for health, integrated media, material art and design, and art for social change,” said Dr. Sara Diamond, OCAD University President and Vice-Chancellor. “We look forward to hearing from our honorary doctorate recipients as we celebrate this cohort of graduating students.”

The first ceremony, at 10:30 a.m. will recognize graduands from the Faculty of Design, with Jeanne Beker and Dr. William Eric Reichman receiving their honorary doctorates. The second ceremony at 3 p.m., will honour graduands from the Faculty of Art, Faculty of Liberal Arts & Sciences and School of Interdisciplinary Studies, and Graduate Studies. David Cronenberg and Jamelie Hassan will receive their honorary doctorates at the afternoon ceremony.

The Honorary Degree Committee, chaired by Chancellor Salah Bachir, selected the recipients from a list of nominees.

Jeanne Beker, CM
After studying acting in New York and Paris, Jeanne Beker moved to St. John’s Newfoundland in 1975 to cover arts for CBC radio. Three years later she landed a job at Toronto’s CHUM radio, and helped launch the groundbreaking series The New Musicon CITY TV. A founding member of MuchMusic, Beker launched the legendary Fashion Television, which she presented in over 130 countries for 27 years.

Editor-in-chief of FQ and SIRmagazines from 2003 to 2008, Beker has also authored five books. She’s been at the creative helm of numerous fashion lines under her own eponymous label, and since 2015 has been Style Editor and host for The Shopping Channel. In 2014 she was named to the Order of Canada.

David Cronenberg, CC, O. of Ont. FRSC
Director David Cronenberg’s reputation as true auteur his firmly established by his uniquely personal body of work that includes Shivers, Rabid, The Brood, Scanners, Videodrome, The Fly, Crash, eXistenz, A History of Violence, Eastern Promises, A Dangerous Method, and Maps to the Stars.

In 2006, Cronenberg worked with the Art Gallery of Ontario as a guest curator for the exhibition, Andy Warhol/Supernova: Stars, Deaths and Disasters, 1962–1964.

Lauded as one of the world’s greatest and most influential directors, Cronenberg has earned critical praise and recognition internationally. In 2006, he was awarded the Cannes Film Festival’s lifetime achievement award, the Carrosse d'Or. He was appointed Officer to the Order of Canada in 2003, Companion of the Order of Canada in 2014, and in 1990 was invested in France’s Order of Arts and Letters and the Légion d’Honneur in 2009.

Based in London, Ontario, Hassan is also a lecturer and independent curator. Her installation works involve highly diverse sites including most recently, Nur, installed in the library of the Great Mosque of Xi'an, China; the Ottawa Courthouse and Land Registry; and the London Regional Cancer Clinic.

A survey exhibition, Jamelie Hassan: At the Far Edge of Words, organized in 2009 by Museum London and the Morris & Helen Belkin Art Gallery at the University of British Columbia toured in Canada through to 2013. She is a recipient of the Governor General’s Award in Visual and Media Arts.

Dr. William Eric Reichman
Dr. William E. Reichman is an internationally known expert in geriatric mental health and dementia care. He is president and CEO of Baycrest, one of the world’s premier academic health sciences centers focused on aging, seniors care and brain function. Dr. Reichman is also Professor of Psychiatry in the Faculty of Medicine at the University of Toronto.

His academic interests have included Alzheimer’s drug development and testing, behavioural changes in dementia, and the character and quality of dementia and mental health services delivered in congregate geriatric care settings. He has advised government in the United States, Canada and China on the impact of an aging society on healthcare demand.

Dr. Reichman is a recipient of a Bronze Telly award for a documentary film that he co-created and hosted, entitled Reflections of Memory Lost: Understanding Alzheimer’s disease.

About OCAD University
OCAD University (www.ocadu.ca)is Canada’s university of the imagination. Founded in 1876, the university is dedicated to art, design and digital media education, practice and research, and to knowledge and invention across a wide range of disciplines.

Deadline to submit a late Intent to Graduate for Spring 2018 Graduation (with a late fee).

Deadline to submit a late Intent to Graduate to the Office of the Registrar for Spring 2018 Graduation (with a late fee).

Deadline to submit an Intent to Graduate for Spring 2018 Graduation without a late fee.

Deadline to submit an Intent to Graduate to the Office of the Registrar for Spring 2018 Graduation without a late fee.

Deadline to submit a late Intent to Graduate to the Office of the Registrar for 2017 Fall Graduation (with a late fee).