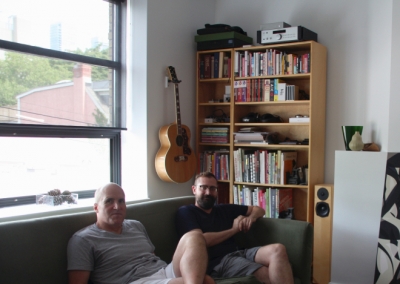 For the second season of the series, OCAD U Assistant Professor Greg Mably graciously invited us over to his home studio in Toronto's Design District. He is an illustrator with great experience in client-based work and digital illustration.

Check out more pictures of the studio and links to Greg's work on the blog. 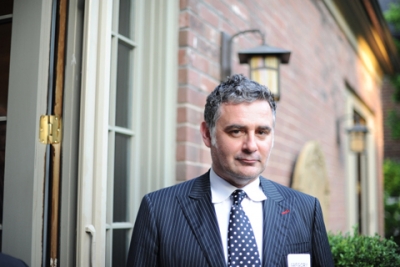 OCAD U hosted a tribute in memory of renowned architect and educator Gregory H. Woods in the auditorium at 100 McCaul Street on Wednesday, January 8. Toronto city councillor Adam Vaughan, Ontario Arts Council director and CEO Peter Caldwell, Woods’s design collaborators Dieter Janssen and Ricardo A. Maturana, Woods’s partner, film producer/director Hadley Obodiac and Wood’s friend and colleague Caroline Robbie all spoke at the event in recognition of his outstanding contribution to architecture, design and the art of life.

Dr. Sara Diamond, OCAD U’s president, who was traveling internationally on the day of the tribute, recorded a special video tribute for the event. Colleagues in the U.K, affectionately known as Woods’s “London Gang,” also provided a memorial video.

One of Woods’s last projects was working as a consultant to ZAS Architects on the designs for the new Lassonde School of Engineering at York University, for which his vision was “the cloud.”  In recognition of Woods’s vision and contribution to fulfilling the dream of this new facility, York University announced the creation of a legacy Gregory H. Woods Fellowship in Innovative Design.

Woods was also the lead project architect with Alsop Architects on OCAD U’s Sharp Centre for Design, which opened in 2004 and transformed the campus, elevating both the university and Toronto in the eyes of the world.

Although based in Toronto, Woods worked on award-winning projects all over Canada, the United States, Europe and the Middle East with Robbie Sane, Robbie/Young and Wright Inc. Alsop and Alsop RMJM, and ZAS and ZAS/Taylor Smyth. He was the principal in the firm Gregory Woods Associates. Woods was a graduate of Ryerson University and The Bartlett at UCL. He also studied at OCAD U for a year in 1987-88. He dedicated many hours of teaching design and art history at the Ryerson School of Interior Design and lectured all over the world, including at OCAD U.

Woods passed away in July, 2013, leaving behind many friends and colleagues at OCAD U.

The Sharp Centre for Design

The Lassonde School of Engineering