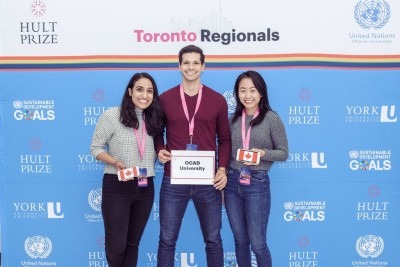 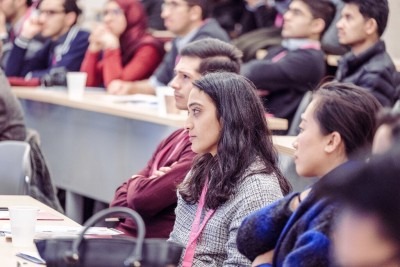 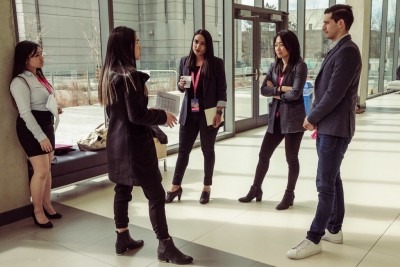 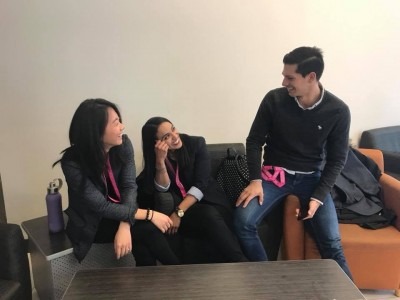 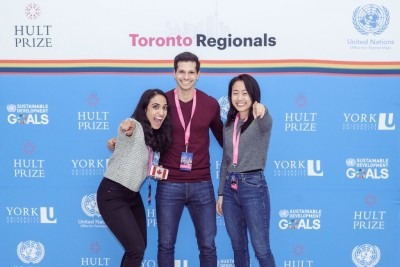 The Hult Prize Challenge is a platform that brings together students from over 100 different countries to solve some of the greatest challenges our world is facing at a global scale. This year’s challenge was “harnessing the power of energy to transform the lives of 10 million people by 2025”. OCAD University’s very own Team Fleet made up of Lucy Gao, Rachna Kumar & Juan Carlos Sandoval-all of which are currently pursuing a Master of Design in Strategic Foresight & Innovation-chose to pursue the challenge at York University located in our very own Toronto. After being fast-tracked to the regional semi-final round, they joined another 42 teams from around the world. Competing over an intense 2-day duration, they came out with an unforgettable experience and although they will not be moving forward to continue to compete for the 1 Million USD award, they have come out with a larger network all of which are aspiring to be future change makers.

How will you change the world with $1M in start-up capital?

The Hult Prize Foundation is a start-up accelerator for budding young social entrepreneurs emerging from the world’s universities. Named as one of the top five ideas changing the world by President Bill Clinton and TIME Magazine, the annual competition for the Hult Prize aims to identify and launch the most compelling social business ideas—start-up enterprises that tackle grave issues faced by billions of people. Winners receive USD 1 million in seed capital, as well as mentorship and advice from the international business community.

The Hult Prize is offered in partnership with Former US President Bill Clinton and the Clinton Global Initiative. It is hosted and supported by Hult International Business School. And it is generously funded by Swedish entrepreneur Bertil Hult and his family. It has been called the "Nobel Prize for Students" by Nobel Prize Winner and annual jury member, Professor Muhammad Yunus.

Each year, a critical social problem is selected by President Bill Clinton and a challenge issued. Teams of 4-5 students are challenged to develop an innovative start-up enterprise to eradicate the problem. Access to Education. Clean water. Affordable housing. Clean energy. Solar Power. These are a few of the issues competitors have tackled since the competition’s inception.

It’s a win-win for the world.

The 2015 Hult Prize "President's Challenge" will be Early Childhood Education in the Urban Slum and beyond, as selected by President Bill Clinton at this year's Clinton Global Initiative (CGI) Annual Meeting in New York. The challenge specifically asks teams to build sustainable and scalable social enterprises to address the early childhood education gap in kids 0-6 years old.