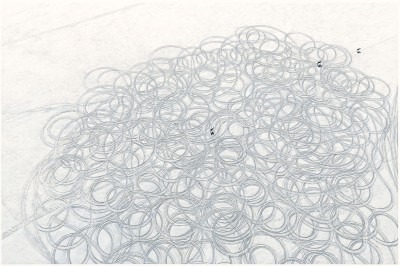 THE WEEKLY PIC: This is a detail from Laura Millard’s big, backlit image called “Crossing,” now on view at the Art Gallery of Ontario, in Toronto, in the show called “Every. Now. Then: Reframing Nationhood.” (Click on my image to see Millard’s full piece.)

Canada’s nationhood, up for grabs in the AGO show, has always been built around ideas of nature, winter and wildlife. Millard’s piece addresses all three: It shows a vast “drawing” that she cut into a snowy landscape with a snowmobile, then photographed with the help of a drone. Passing deer decided to add their own touch, and I’m particularly pleased with how the contribution of such “disorderly” beasts is perfectly rectilinear, whereas the drawing they tread on, made by a supposedly “rational” human, is a knotted mess.

Since its founding as a nation state, and before, Canada has treated the natural world as a blank slate on which its colonists had the right to make whatever mark they chose. Millard has taken that literally, using the messiest, noisiest, smelliest drawing tool she could find.  Her piece is both deeply abstract, in a Pollock-ian mode – Jackson, too, liked to work on the horizontal – and as tied to the world and its troubles as any art could be.

Do her three passing deer provide hope that nature may yet overwrite humanity’s mark? Or are we more likely to read them as a sign that nature is being scribbled out?

For a full survey of past Pics visit blakegopnik.com/archive.