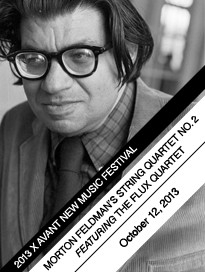 Doors 5pm / Concert 6pm / At the Music Gallery and OCAD U Student Gallery (52 McCaul St., across the parking lot from the MG)

In the fall of 1983, a young up-and-coming group called the Kronos Quartet premiered a new work by Morton Feldman in Toronto, a last-minute replacement for another group whose members were tragically killed in a car accident. Commissioned by New Music Concerts and broadcast live-to-air on the CBC’s Two New Hours, this “two-hour” quartet quickly became three, then four, pre-empting the national news and finishing just minutes before the network’s 1AM blackout.

We celebrate this notorious premiere’s 30th anniversary with the first Canadian performance of Morton Feldman’s String Quartet No. 2 in its entirety: a six-hour feat of endurance and transcendence performed by NYC’s FLUX Quartet.

FLUX, whom many will remember from their Canadian debut at the Music Gallery in 2010, are one of only two ensembles who have recorded the enormously taxing FSQ2 (the other is the Ives Ensemble, whose version clocks in at a zippy 4:45). FLUX’s virtuosity, rigour and risk taking has led to breathtaking performances of the world’s most dangerous repertoire (not to mention several guest spots on 30 Rock).

We invite fellow students of history, boundary smashers, intrepid sonic explorers, seekers of the new, reminiscing nostalgists and renegade new music enthusiasts to experience FLUX + FSQ2 with us. This is more than just a remount. We are going all out to present this effing masterpiece in a manner which befits: an event that encompasses two venues (the Music Gallery and OCAD U Student Gallery), a chillout room, video games, food vendors on site and a live broadcast on CIUT 89.5FM. It’s a slow-motion rave.