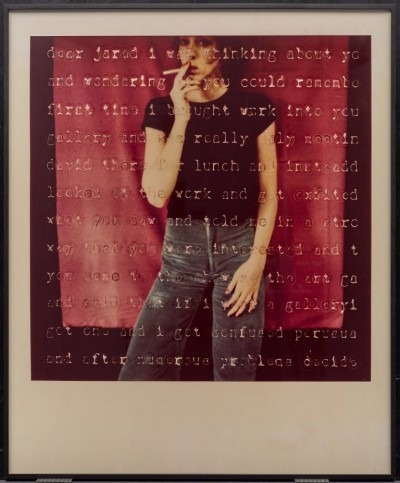 Did you know the AGO collection – both on display and in the vaults – has a total of nearly 95,000 works?  Curators are strategically adding to that number by acquiring key pieces, supported by the generosity of donors and collectors who share the mission to bring people together with great art.

To keep you up to date with what’s new in the Gallery and as part of the Look:Forward initiative, they’ve created a gallery space dedicated to showing many recent acquisitions. Located in Irina Moore Gallery West on Level 2 of the AGO – head up the scissor stairs and take a right down the hallway – this exhibit will rotate every few months.

Right now two key works from Japanese artist Yayoi Kusama, Town (1999) and Butterfly (1985) are on display. Both works are colourful screen prints and feature Kusama’s signature polka dot motif. Kusama once said, “Our earth is only one polka dot among millions of others…we must forget ourselves with polka dots! We most lose ourselves in the ever-advancing stream of eternity.” In Butterfly, she uses contrasting psychedelic colours to appeal to our sensory imagination – and you may wonder if the butterfly is flying through space or if it’s caught in a net. Many more works by Kusama will be featured in the upcoming show, Yayoi Kusama: Infinity Mirrors, opening on March 3.

On a nearby wall, you’ll spot two works by Barbara Astman, Dear Jared (1979-80) and Untitled (1981). Astman is an American-born artist who moved to Toronto to study at the Ontario College of Art (now OCADU) in 1970. Though the works were created only a few years apart, Dear Jared and Untitled highlight a shift in Astman’s practice: a move away from using text in her work and towards a focus on the symbolism of objects in her photographs.

Alongside these works, you’ll also see Andy Warhol’s Campbell’s Soup I (1968), Jasper Johns’s Two Flags (1980) and Roy Lichtenstein’s Two Paintings: Dagwood (1984), all of which were acquired in the last year, thanks to a generous donation from Margaret and Jim Fleck.