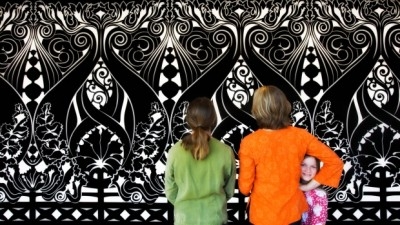 Canada is the second largest country in the world by area and boasts both a vibrant nationwide arts community and a strong public commitment to culture. And yet Canadian contemporary art has not received widespread attention outside Canada's borders. The largest survey of contemporary Canadian art ever produced outside Canada, Oh Canada features work by more than 60 artists who hail from every province and nearly every territory in the country, spanning multiple generations and working in all media. MASS MoCA's curator Denise Markonish spent the last three years crisscrossing Canada to view hundreds of exhibitions in museums and galleries, visiting over 400 artists' studios, and making connections with a full range of artists working in Canada today.

Markonish's extensive research brings this project the fresh perspective of an informed and curious outsider. While Oh, Canada will ask questions such as "What are some of the distinguishing characteristics of art made in the country?" its aim is not to present a merely nationalistic show. Rather, the goal is to encourage a dialogue about contemporary art made in Canada (one touching on issues of craft/making, conceptualism, humor and identity), a dialogue that will resonate just as deeply for Canadians as for outsiders.

Ten other new commissions will join 95 already existing works (made within the past five years) for the exhibition including: Micah Lexier’s A Coin in Every Corner comprised of a series of specially minted coins painstakingly installed in corners throughout the multi-building factory campus; Kent Monkman’s double diorama based on fictitious buddy characters Tonto and the Lone Ranger, and Germany’s Winnetou and Old Shatterhand; and Ed Pien’s installation made from cut paper and projected video; and new work from Terrance Houle, Divya Mehra, Graeme Patterson, Garry Neill Kennedy, Mitchell Wiebe, Craig Leonard, Janice Wright Cheney and David Harper.

When the exhibition opens in Atlantic Canada, Oh Canada will span two provinces, with art to be on display at:

-The Confederation Centre Art Gallery in Charlottetown
-The Owens Art Gallery in Sackville, NB
-The Louise and Reuben Cohen Art Gallery at the University of Moncton
-The Galerie Sans Nom in Moncton.

In Calgary, the show will spread out throughout the city, including: